Home » Feature Articles » A Glimpse of the Geisha World 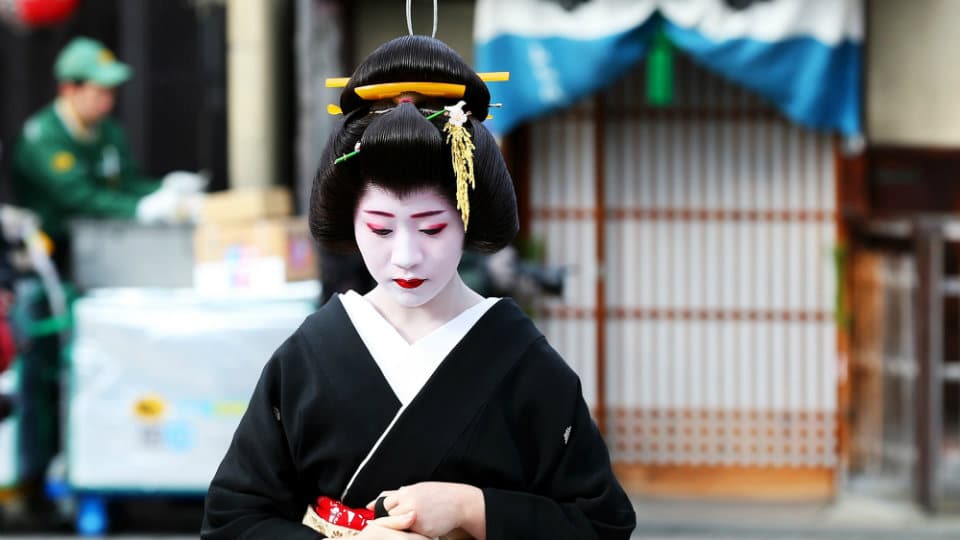 A Glimpse of the Geisha World

Images of Mount Fuji, cherry blossoms, bullet trains or electronic devices come to mind when thinking of Japan. Less familiar is another Japanese icon: the Geisha in a kimono, with traditional hairdo, white makeup, scarlet lipstick and an aura of mystery and allure.

In Japanese, the word “Gei” stands for art and “sha” for performer. A geisha is a woman over the age of 22, trained in music, dancing, the social graces of making conversation and being a hostess at parties. They can still be seen in the “tea house districts” of big cities, especially in Kyoto.

A “Maiko” is an apprentice geisha [“Mai” being dance and “Ko” a child], training and learning from her seniors at work. A maiko is distinguished from a geisha by her more colourful kimonos,  hairdos embellished with ornaments, long sleeves and panels hanging from the “Obi” [sash] at the back. I was told that the older a geisha is, the more fascinating she is thought to be and so needs less adornment. Geisha and maiko regard themselves as exponents of the arts of their country. They perform to select audiences in tea houses or entertain at parties, where they talk to guests, refill “sake” glasses, dance or give music recitals, singing or playing the Shamisen, a three stringed instrument. These sessions are expensive. A geisha is also known as “geiko” or “Woman of Art.” They can marry but have to quit their profession if they do.

Earlier only men were employed in this service. Women took to this form later, being recognised as professionals by the 18th century. From a great number in the 1920s, they are now said to have dwindled to about a hundred maiko and 200 geisha. Post-war Japan promulgated rules to ensure their rights to education and stopped the old practice of selling young girls into the business. Geishas aver that they are not sex workers but exponents of art.

Japan, from ancient times, has had a tradition of literary and intellectual excellence in women. Lady Murasaki, a lady-in-waiting at the Imperial Court of the Heian period [around 1000] wrote “The Tale of Genji.”  Her contemporary, Sei Shonagon, a lady at the Court of Empress Teishi, authored the “Pillow Book of Sei Shonagon,” a detailed and witty account of life in the Imperial Court of that time, readable even now. Maybe this is why the knowledge of poetry and literature and the ability to sustain good talk, is valued in a geisha too.

The first film about geishas was a silent one, titled “The House of Geisha” produced in May 1914. This theme gained interest when Steven Spielberg and Douglas Wick produced the film “Memoirs of a Geisha” in 2005, based on Arthur Golden’s novel of the same title written in 1997. The setting was in pre-war Japan and was well-received abroad. It created controversy in Japan as not being a factual portrayal of the culture.

The day for a geisha or maiko starts with elaborate make-up and hair-styling. Both have a stark white foundation on the face, some red around the eyelids, darkened brows and eyes and scarlet lipstick, the neck and  nape being white as well. Their intricate hair-styles are sometimes dressed by professionals. Earlier, wooden slats on frames were used to rest the neck when sleeping so that the hair was not rumpled. Nowadays traditionally styled wigs are used to lessen the strain on the artists’ hair.

In the late 1980s, when my husband was the Indian Ambassador in Tokyo, we were both invited to a dinner along with other foreign guests. To my delight, some exquisitely dressed geishas were also present. At dinner an elderly geisha sat with me and my neighbour, an American who was on his first visit to the country. The starters were served on separate plates, finely garnished, a delight to eye and palate, to be eaten with chopsticks. My neighbour seemed unused to both the food and the use of chopsticks. Our geisha companion filled sake glasses and made small talk.

Finally, the main course arrived on ceramic plates with a hand painted design suggesting flowing water. In the centre of the dish was a grilled fish fillet surrounded by vegetables. On the border of the platter were decorative leaves, and a real blue flower, resting on some oval objects to evoke a river bank effect.

Afraid to tackle the fish or the slippery greens, my neighbour put aside his chopsticks and tried to pick up with his fingers the small spheres on his plate. The geisha almost lost her poise at this point; instead, picking up his chopsticks, she deposited the little objects on the tablecloth with a smiling “Sumimasen!” or “excuse me.” She gently explained that they were small stones that the chef had used to create an artistic landscape arrangement, “bad for  teeth, not to eat.”

This was my only interaction with a geisha. I came away filled with admiration for their sartorial elegance, their bearing, grace, poise and sensitivity.