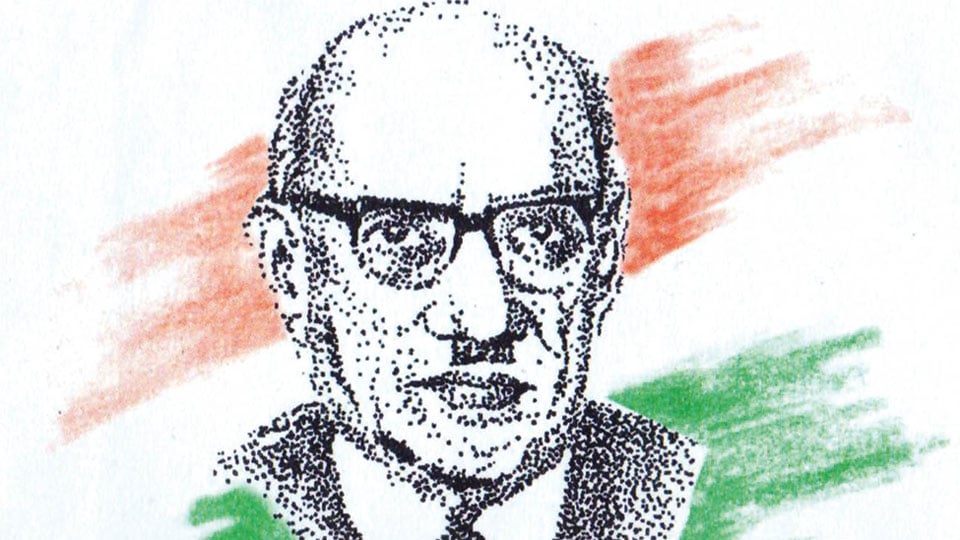 A Legendary Personality who has carved a niche in his Profession

He is beyond description. Reporter, Editor, Feature Writer, Political Analyst and more — his close contact with British Heads in India and National leaders from Gandhiji to his close associates. In fact, he was sought by all of them on too many occasions.

Taking back my memory to seventies, I first came across his name as Editor-in-Chief and Founder of INFA (India News and Feature Alliance), a fortnightly syndicated column started in November 1959, which was subscribed by our Department to all the District Information Centres. Local newspapers were also making use of it. I was very eager to read it for its news and feature analysis on development in India and States by top experts. I used to preserve items written by Das, as I was a student of Journalism. He says, “INFA is most rewarding achievement of my Journalistic Career” which had spread over 55 years starting with K.C. Roy’s Associated Press of India, PTI, The Statesman and Hindustan Times as Editor-in-Chief.

“Indian History seen from the inside”

In order to know what a rare Journalist Durga Das was and the extraordinary role played by him in the country’s history during the stirring times, one has to read his 500-page fascinating and wholly absorbing book (more his memoir) titled ‘India From Curzon To Nehru And After,’  first published in early 1969. The material for the book, according to Das, is based on his 20 million words of straight reporting, features, analysis and comments, besides half a million of words in the form of notes in shorthand.

Dr. Zakir Husain, the 3rd President of India, in his foreword (March 20, 1969) says: “Here is Indian History seen from the inside. He has discharged honourably  the debt he owes the Nation of telling the story of a working Journalist’s life, lived intensely and dedicated to the service of this country and the promotion of international understanding.”

Gold mine of a Book

This one para description of the book is suffice to highlight how Durga Das has unfolded the story to the History of the twentieth century: “This fast-moving, lively and independent account of the politics and international affairs is enriched by intimate, perceptive and far from uncritical sketches of great leaders such as Gandhi, Jinnah, Nehru, Desai and Patel. Perhaps, no other book reminds the reader so firmly that politics, even at its most exalted and dramatic, is about people. Certainly, no one who is interested in India, in the history of British imperialism, or in the realities of present day Asia, can neglect this gold mine of a book.” Indeed, no exaggeration.

His destiny of Journalistic career for nearly 55 years, besides being a busiest newsman in Delhi, also saw him undertake foreign travel over twenty times across the world which provided him an opportunity of holding dialogues with top world personalities, among them five British Prime Ministers, three US Presidents, three Prime Ministers of Japan, two Chancellors of West Germany, two Chairmen of the Soviet Union and Presidents Tito and Nasser. What a stature Durga Das had enjoyed with them as an eminent Indian Journalist!

During his first voyage to London in summer 1931, referring to the Indian freedom struggle, he records: “The British, a nation of shopkeepers, would react to a blow struck where it hurts most. It would take ages to work on the British conscience alone.”

His impression on both: “Lord Curzon was the First of the Viceroys of India, Nehru was the Last of the Glittering Tribe. Curzon left behind a Lore, Nehru a Legend.” This cliche has been employed by Nehru’s admirers, likewise by his detractors. Yet it embodies a substantial truth.

Durga Das had established special relationship with Gandhiji and records how we had studied him: “Gandhi perceived every problem with the shrewdness of a bania (trader). He used his legal talent to sell his creed and programme. He was convinced that the British were in India for material gain and that if the economic ties between India and Britain were weakened or surrendered, they would cut their losses and depart.”

When the formation of Interim government was taken up in August 1946, under the guidance of Gandhi, Congress Working Committee preferred with full majority Sardar V. Patel as Prime Minister as they felt he was the “Iron Man with his feet firmly planted on earth.”

Jawahar is the only Englishman

But, when Gandhiji’s choice became Nehru as PM, Durga Das asked him as to why he preferred Nehru. Gandhiji with a laughter replies, “Jawahar is the only Englishman in my camp!” And then added: He will make India play a role in international affairs. Sardar will look after country’s affairs. They will be two Oxen yoked to the Government Cart.

When Das mentions it to Rajendra Prasad he tells, “…Gandhi had once again sacrificed his trusted lieutenant for the sake of ‘the glamorous Nehru’.”

After Nehru, what? Das writes: “Lal Bahadur Shastri — now the ‘Big little man’ stepped into Nehru’s shoes somewhat diffidently. …He was painfully aware that he lacked Nehru’s overpowering personality and the Nehru legend was, as he himself confessed, no easy burden to live with.”

The following record mirrors the roles played by him when he writes: “I was a witness at very close quarters of this pulsating drama, the ebb and flow of the struggle for freedom. I know intimately the men and women who shared its hazards and rewards. Twas bliss to be alive in those stirring times.”

In a ten-page Epilogue, he ends with this destiny: “Gandhi and Patel carved out a destiny for themselves and the country; Jawahar Lal Nehru was the child of destiny; Lal Bahadur Shastri was thrown up by destiny; Indira Gandhi is an instrument of destiny. What that destiny is the late seventies may reveal.” (Das dies in 1974).