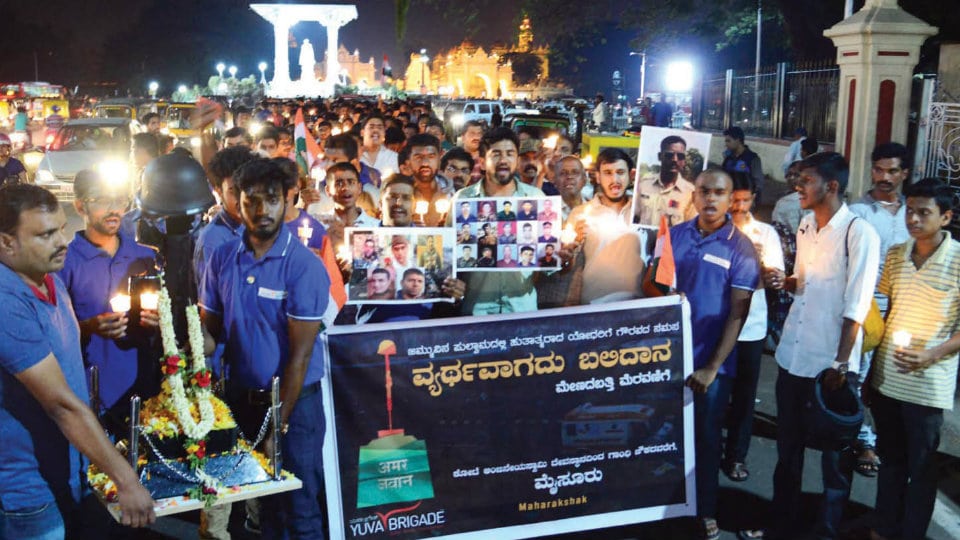 Mysuru: The city of Mysuru last evening joined the nation to pay homage to 44 martyred CRPF soldiers who were killed in a car bombing attack in Kashmir’s Pulwama by Pakistan-based terror group Jaish-e-Mohammed.

Solemn ceremonies were held across the city where people, cutting across party and religion barriers and holding candlelight vigils, expressed shock over the spine-chilling terror attack and called the terrorist strike a cowardly act. People showed their gratitude and sympathy for the attack victims and expressed solidarity with the families of the victims. They also prayed for the injured and wished for their speedy recovery.

More than 3,000 people assembled in the surroundings of Kote Anjaneyaswamy Temple, Palace North Gate, lit candles and prayed for the victims.

Youths, women and children and college students started pouring the Temple premises at around 6 pm and waited till dark to light the candles.

Holding the candles, they shouted slogans against Pakistan for the inhuman act.

Univocally they demanded the Centre to destroy the terror tents in Pakistan-occupied Kashmir (PoK) and also in Pak soil. They boosted the spirit of the Armed Forces by raising ‘Jai Jawan’ and ‘Bharat Mata Ki Jai’ slogans.

Another 2,000 people held vigil at Gandhi Square and expressed solidarity with the Armed Forces.

The protesters stood at the venue for almost one-and-a-half hours and expressed their solidarity with the bereaved families. Several other candlelight vigils were held in front of Mahatma Gandhi bust in front of the Law Courts, Field Marshal K.M. Cariappa Circle (Metropole Circle) and Rangayana.

Meanwhile, the bodies of slain CRPF soldiers were brought to New Delhi. The bodies arrived at Delhi’s Palam Airport. Defence Minister Nirmala Sitharaman, Home Minister Rajnath Singh, among others, were present at the Palam Airport to pay their respects to the martyrs.

Karnataka Chief Minister H.D. Kumaraswamy with the family of CRPF personnel H. Guru, who hailed from Mandya district. Guru was among those, who were killed in the Pulwama attack.

“I spoke to martyred CRPF soldier H. Guru’s family over the phone and consoled them. Their grief is heart-wrenching. We are with them. I have instructed officials to speed up the process of compensation,” Kumaraswamy tweeted.

Speaking to reporters in Mandya, Guru’s wife, Kalavathi mourned as she never thought such a tragic incident would ever happen to her and she could not pick his call though he called her several times to talk to her before the tragic incident.