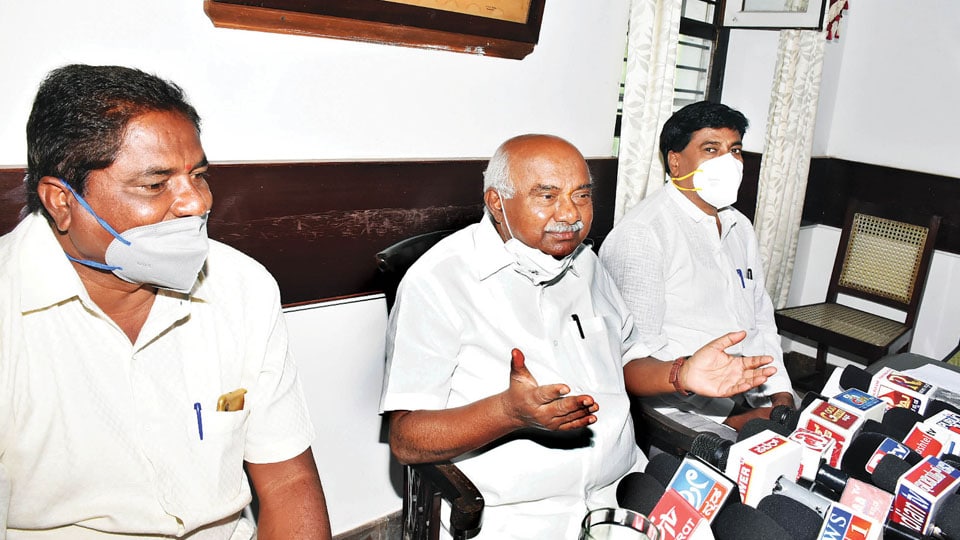 MLC Vishwanath alleges Regional Commissioner and MLA have internal adjustment; Probe just an eyewash to hoodwink public; MLA is bound to get a clean chit

Mysore/Mysuru: MLC A.H. Vishwanath has stated that Regional Commissioner (RC) Dr. G.C. Prakash has already completed the probe into the alleged land grabbing and he will hand over a favourable report to K.R. Nagar JD-S MLA S.R. Mahesh in two or three days.

Addressing a press conference at Jaladarshini Guest House in city this morning, he said that the RC has already entered into an internal adjustment with MLA S.R. Mahesh.

“The urgency showed by the RC in visiting yesterday’s MLA’s protest venue, the statement given to the press by the RC that the investigation will be completed within two or three days and the confidence of the RC in saying that he has already looked into the details of the Sa. Ra. Convention Hall (Choultry) smacks of an understanding he has entered into with the MLA. He will surely give a clean chit to the MLA,” Vishwanath said.

“The so-called investigation report will be submitted by the RC on Monday without even the officer visiting the land parcels and the report is already ready on his table. He has to just sign and send to the Government. Using this report, the MLA will tell the world that he is innocent and his Choultry is built on legal land,” Vishwanath charged.

The RC’s move is suspicious and everyone knows that the three-time MLA and one-time Minister staged a high-drama yesterday by staging the protest. “On any application or request on land by a public or an elected representative, the RC does not set a deadline and keeps the file for months or years. Why there is so much urgency in this issue? Does it not raise suspicion?” he questioned.

“The MLA’s protest along with his handful of supporters, the RC’s visit placating the MLA, the intended clean chit…everything is pre-planned to hoodwink the public. The land dealings of the MLA including the one where his Choultry stands (Survey No. 130/3 Dattagalli), the illegalities that have been committed at Survey Number 124/2 at Lingambudhi village, Survey Number 115 at Kergalli village and Survey Number 123 at Dattagalli all are at DC’s Court now. Why should the RC take up just one issue ignoring the rest? This is highly suspicious,” the MLC said.

Vishwanath further said that the RC is bound to certify that the Choultry is not built on the Raja Kaluve. “Yes, this will be his report. You wait and see. The RC must instead investigate into the entire parcel of land in Survey Number 98 to see whether the MUDA land has been encroached. Or is there a Raja Kaluve that has been buried or closed by land mafia after constructing buildings? All angles must be investigated along with all the four documents released by Rohini Sindhuri to ensure justice,” the MLC demanded.