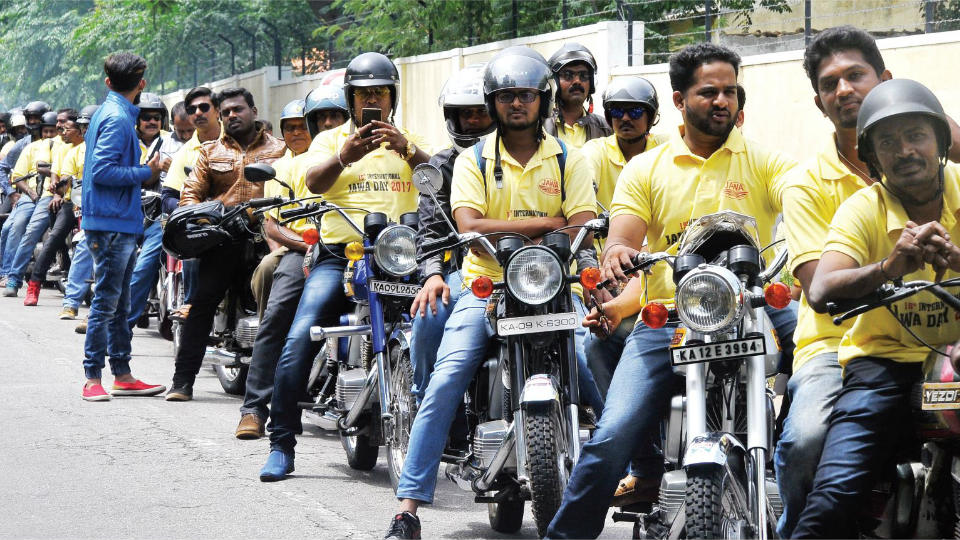 Mysuru: More than 350 bikers including 80 from Bengaluru took out a rally with their precious good old Jawa and Yezdi bikes vrooming along the thoroughfares of city to mark International Jawa Day this morning. The event was also a platform for Jawa bike enthusiasts to interact with some of the oldest riders and employees of the then Ideal Jawa factory.

The roads came alive with the sounds of two-stroke engines of Yezdi and Jawa bikes as their owners took out their pride possession to mark the day. These iconic machines, called the ‘King of Roads’, were manufactured by the erstwhile Ideal Jawa (India) Ltd. which had its factory in Yadavagiri.

The factory, Ideal Jawa (India) Ltd., manufactured the most sought-after two-wheelers in the ’60s and ’70s. The land which stood abandoned after the factory stopped production in 1981 was auctioned lock, stock and barrel in 2001.

While motorists gave way for these iconic machines to pass by, the public, especially young boys stood on either sides of the road to have a glimpse of these machines which were once manufactured in their city.

The bikes which took part in the rally included Jawa Peraks, Jawa Cezetas and Jawa 350 which include right from 60cc to the 350cc Jawa models, Yezdi 250, Yezdi Roadking, Yezdi Classic, Yezdi Monarch and other models. A white colour Mini Jawa, owned by Ramakrishna and the yellow-coloured modified 60cc Jawa small bike owned by Shafiullah Khan, were the cynosure of all eyes at the rally.

Jawa is one of the most iconic motorcycles to have graced the Indian roads. With the first Jawa rolling out of Czechoslovakia in 1929, it made its Indian debut through the efforts of F.K. Irani at Ideal Jawa which started importing them to Mysuru around the mid-1940s. Jawa bikes are still being actively used today not just by their original owners but have been handed down to generations.