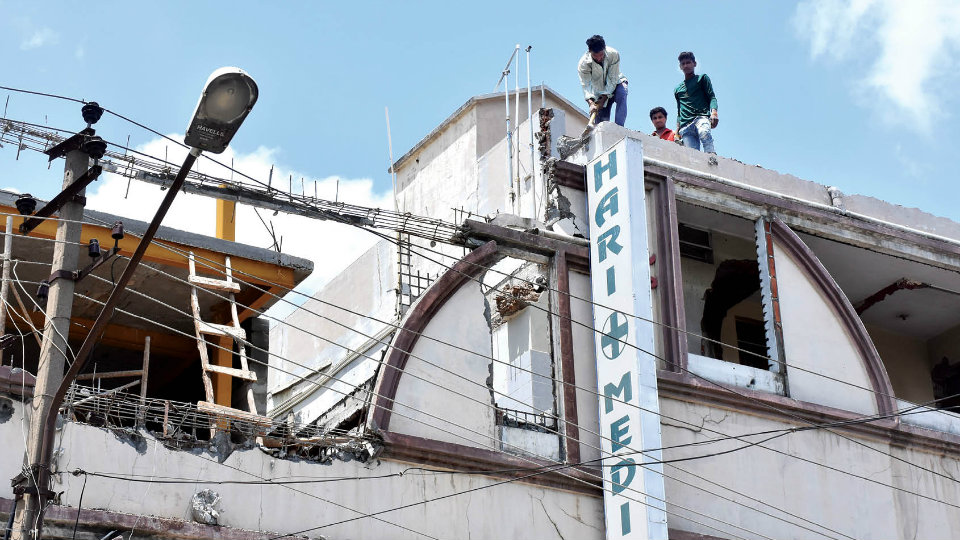 Mysuru: One more ambitious project in city is the widening of the Irwin Road. This is another much delayed project caught in land acquisition and compensation tangles. Though the demolition of buildings for road widening again began today, the project is doubtful this Dasara.

Irwin Road is one of the busiest roads and connects Sub-Urban Bus Stand to the City Railway Station. The 850-metre stretch of the road from Ayurvedic College Circle to Arch Gate on B.N. Road was to be widened either by 4 metres or 6 metres.

Already, 56 properties have been acquired and demolished and the process to demolish the rest of the properties has been set into motion.

MCC officials were aiming to complete the project before Dasara 2019 but now it looks like this project too will not be completed before Dasara.

There are 84 properties on both sides of the Irwin Road and the MCC has so far acquired 56 properties and has demolished them as per widening specifications. Rs. 16 crore has been paid as compensation for property acquisition and has completed the first phase of the project.

Speaking to Star of Mysore this morning, Geetha Udeda, Assistant Commissioner, MCC Zone 6, said that they have speeded up demolition process and today, the side of MCDCC Bank was being demolished.

“We are trying our best to complete the project before Dasara. Eight properties are contentious as some of the owners have approached the Court of Law against the demolition. Among the contentious properties is the Jumma Masjid which was built in 1927. The Wakf Board has demanded the rebuilding dome and minarets of Jumma Masjid on the stretch. The MCC top brass will look into this proposal,” she said.

The MCC has fixed compensation at Rs. 13,072 per sqft, excluding the value of the building. For this, Rs. 37 crore has been earmarked. Rs. 25 crore has already been disbursed as compensation for building owners. Within a few days from now, eight buildings will be demolished and within August, the officials are targeting to demolish the remaining 24 structures,” she said.

Once the demolition process is cleared, works on widening the 850-metre stretch of the road from Ayurveda College Circle to the Arch Gate on B.N. Road will begin at an estimated cost of 4.5 crore. It will be a 60-feet (18 metres) road including footpath. The four-lane road will have a median and box drainage feature.