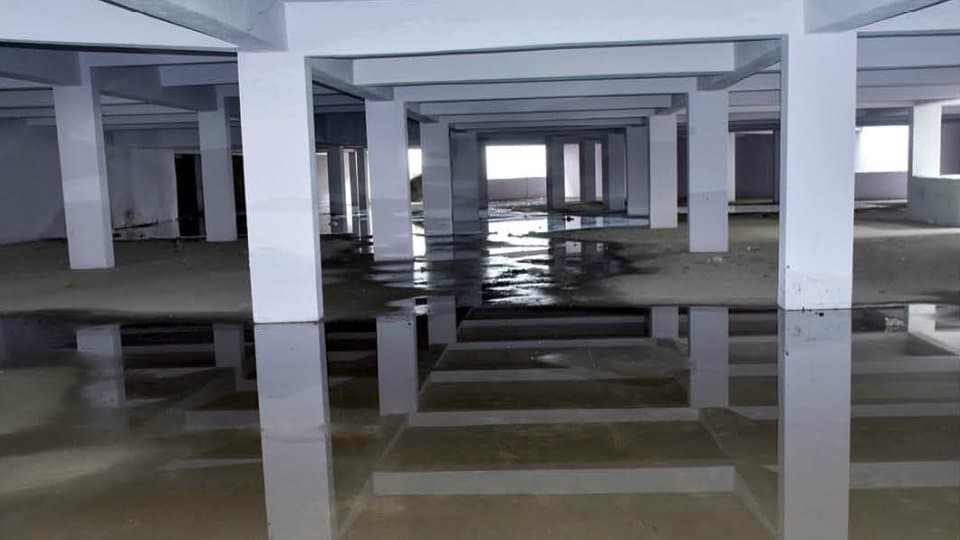 • Project delayed every year since 2012

Mysuru: Just 40 days for Naada Habba to begin and the much-touted Town Hall Multi-level Parking facility and the ambitious widening of Irwin Road will not be completed before this Dasara.

The Town Hall Multi-level Parking can accommodate over 600 four-wheelers and over 1,000 two-wheelers. The works of parking lot began way back in 2011 and only 80 percent of the works are complete till now.

Hyderabad-based Chhabria Associates was given the contract worth Rs.18.28 crore to construct the parking lot and the ground-breaking ceremony was performed on April 11, 2011. The project was to be completed by April 2012. However, it remains incomplete even after all these years which shows the utter disregard by elected representatives and officials.

Last year, the Mysuru City Corporation (MCC) had opened the facility for Dasara with a main intention of easing traffic congestion and parking hassles in the Central Business District where people come to witness Dasara programmes.

The present state of this ambitious project is pathetic as rainwater has entered the basement and the whole area is stinking.

The retaining wall constructed above the basement has collapsed and liquor bottles are strewn all over the place indicating that nefarious activities are being carried out there after dark.

The whole place is filled with mounds of rubble presenting an ugly sight to the visitors. The toilets inside the campus have been locked and many people park their vehicles on the surrounding roads and come here to relieve themselves.

In June this year, SOM was told that there is water-logging problem on underground level of parking lot. Officials had stated that minor works have to be undertaken to prevent the gushing in of rainwater inside the basement parking. Tenders have already been called for this and works will be completed by Dasara.

However, speaking top SOM this morning, MCC Executive Engineer Nagaraj said that works on the parking lot have to be relaunched and there is a requirement of Rs. 5 crore. “We have prepared an estimate of Rs. 5 crore for additional works as the previous contractor has not finished the work and at the same time approached the Courts. We have submitted the proposal to the Mysuru Deputy Commissioner a month back and we are waiting for his approval,” he said.

As the project is worth Rs. 5 crore, the DC has to clear the project. “Our lawyer has told us that despite legal hurdles, the MCC can go ahead with additional works for the delayed project to see the light of the day. Now even if the DC clears the project, we need time to call tenders and will have to give one month time for contractors to apply for tenders. Since Dasara is just 40 days away, it may not be possible to complete the works before Dasara-2019,” he added.