Home » News » ‘It was H.D. Deve Gowda who instilled confidence in depressed Siddharamaiah’ 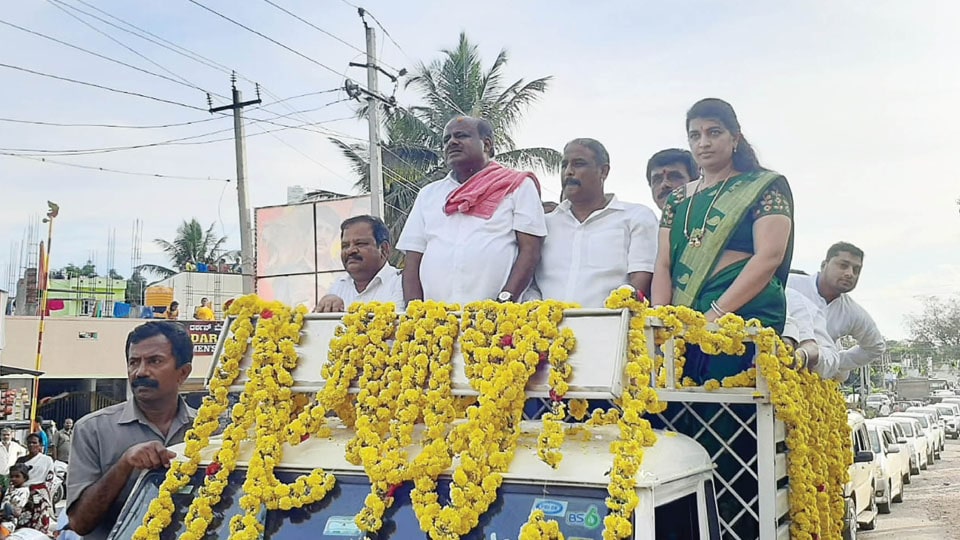 ‘It was H.D. Deve Gowda who instilled confidence in depressed Siddharamaiah’

Mysore/Mysuru: Maintaining that it was former Prime Minister H.D. Deve Gowda who instilled confidence in Siddharamaiah, when he was in political distress, former Chief Minister H.D. Kumaraswamy (HDK) rubbished opposition leader Siddharamaiah’s claims that he (Siddu) was instrumental in the growth of JD(S).

Pointing out that Siddharamaiah came to JD(S) Supremo  H.D. Deve Gowda’s house ‘Anugraha’ in Bengaluru after he lost from Chamundeshwari Constituency in the 1999 Assembly polls and said that he wanted to quit politics, Kumaraswamy said that Deve Gowda pacified Siddu by instilling confidence in him and also asked him to continue in politics. Perhaps Siddharamaiah may have forgotten this, he noted.

Maintaining that Siddharamaiah, when he was in the JD(S), used to come for party rallies only after all the arrangements were made, Kumaraswamy recalled an incident where Siddharamaiah had initially refused to attend a party rally at National College Grounds simply for the reason that his photo had not appeared in banners. Recalling that Siddharamaiah became the Deputy Chief Minister in the Congress-led Coalition Government in 2004 after no party had gained an absolute majority in the Assembly polls, Kumaraswamy contended that it was Siddharamaiah who walked out of the JD(S) after forming his own ‘AHINDA’ outfit.

Highlighting his plans for the 2023 Assembly polls, Kumaraswamy said that the party is working on coming to power on its own by winning 123 seats.

Asserting that the JD(S) is not seeking the help of noted poll strategist Prashant Kishor, the JD(S) leader said that the party is banking on youths for winning the polls. Admitting that the party had failed in its organisation over the past 12 years, Kumaraswamy regretted for having joined hands with the Congress for forming the Government in the State post 2018 Assembly polls. Stressing that it was the JD(S) which announced farm loan waiver, he said that the main focus of the party is the forthcoming Assembly polls. JD(S) has already identified the party candidates for 126 Assembly segments, he added.

Arguing that the Congress has no right to label the JD(S) as a family party, as the Congress itself has been a dynastic party for decades, Kumaraswamy questioned whether the Congress had no leader other than Dr. Yathindra to contest from Varuna.

Coming back to his own party affairs, Kumaraswamy, referring to the issue of dissident party MLA G.T. Devegowda, said that the JD(S) top brass will have to pay heed to what his (HDK) son Nikhil and G.T. Devegowda’s son G.D. Harish Gowda together decide on continuance of GTD in the party.

Maintaining that GTD is not in touch with him for the past two years, Kumaraswamy asserted that he does not know the present stand of GTD and he can only answer when the issue comes up to him. Asserting that Nikhil and G.D. Harish Gowda are good friends, he contended that both of them had darshan of Goddess Chamundeshwari atop the Chamundi Hill.

Probably they have met to discuss Nikhil’s cinema plans, he said adding that he does not know much about the talks they had.

Referring to Hangal and Sindagi by-polls that are due to be held on Oct. 30, Kumaraswamy expressed hope that the JD(S) would win both the seats. Lashing out at Congress MLA Zameer Ahmed Khan, who had accused JD(S) of receiving money bags and fielding Muslim candidates in both the Assembly segments only with the purpose of helping the BJP, Kumaraswamy said that Zameer’s words carry no weight and as such it is better to ignore him.

Asserting that he does not have to answer to Zameer’s charges, Kumaraswamy maintained that he never misused his father’s (H.D. Deve Gowda)  position as the Chief Minister and Prime Minister, either for his personal or for monetary gains.

Kumraswamy also wanted Zameer to revisit his past when he struggled to eke out a livelihood. He further alleged that both the ruling BJP and the Congress were spending huge sums of money for the by-polls.

3 COMMENTS ON THIS POST To “‘It was H.D. Deve Gowda who instilled confidence in depressed Siddharamaiah’”