Home » News » ‘You will be in jail permanently if I am jailed even for a day,’ GTD tells CM 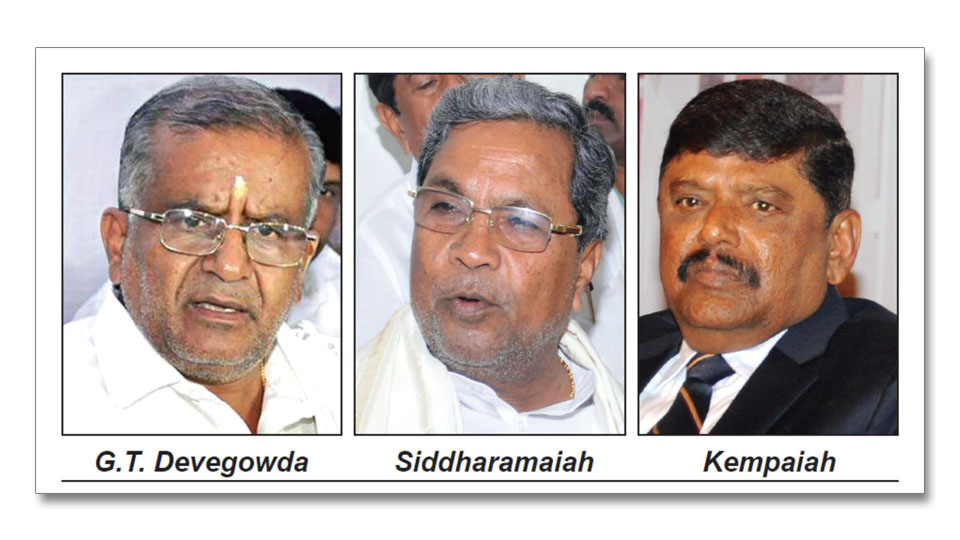 ‘You will be in jail permanently if I am jailed even for a day,’ GTD tells CM

Mysuru: “I will take political retirement even if one farmer or a middleman says that G.T. Devegowda has accepted money from them,” said Chamundeshwari MLA G.T. Devegowda, two days after the State Government handed over the alleged Karnataka Housing Board (KHB) scam to the Anti-Corruption Bureau (ACB).

The scam allegedly took place when G.T. Devegowda was the KHB Chairman and the complaint was with the Lokayukta where it was in cold storage. However, ACB has now registered an FIR against his son G.D. Harish Gowda and 46 other accused. The FIR was filed in connection with a 2014 scam alleging that farmers near Mysuru were cheated in the matter of buying land for a housing project.

Speaking to a private TV channel yesterday, G.T. Devegowda said that charges pertained to cheating of farmers during land acquisition by the KHB for a housing and development project at Gungralchatra and Yelachenahalli near Yelwal was baseless and he had no role to play in it. “The KHB Chairman or the Board have no powers of land acquisition. Their powers are only limited to recommendations,” he said.

Terming the government move to transfer the case to ACB as politically motivated, Devegowda targeted Chief Minister Siddharamaiah. “It is a conspiracy hatched by the CM after his attempts to woo me into the Congress failed. Siddharamaiah must realise that if he sends me to jail even for one day, he will have to be in jail permanently,” he charged.

Reminding Siddharamaiah that he (Devegowda) and his family had strived for more than 30 years to give a boost to his (Siddharamaiah’s) political career, Devegowda said, “Goddess Chamundeshwari will not forgive Siddharamaiah if he tries to finish me off politically by foisting false cases against me,” he said.

Directing his anger at former IPS officer Kempaiah who is now the advisor to the Home Minister, Devegowda said that but for Kempaiah, Siddharamaiah could not be in power for even a single day. “Siddharamaiah is just the head of the government sans any powers. He is not capable of taking an administrative decision on his own. Kempaiah controls the government and he dictates terms to the CM and he directs how the administration should function. Kempaiah is behind politics of vindictiveness,” Devegowda alleged.

Reverting on the KHB land controversy, he said that all the land purchase at Gungralchatra and Yelachenahalli near Yelwal have been done as per procedures by the KHB. “The issue was raked up by certain Congress agents who forced some farmers to lodge false complaints. Taking this opportunity to gain politically, the government handed over the probe to Lokayukta and now the case is with ACB,” he said.

“The case was investigated by the Lokayukta and it has not found a shred of evidence. The case that had entered into a cold-storage has been revived now to target me, he claimed.

‘PEOPLE WILL NOT FORGIVE CM’

“By hook or crook, Siddharamaiah wants to defeat me in Chamundeshwari and he is using all methods to corner me. Earlier, the CM had said that he would win if he contested from any of the 224 constituencies in Karnataka. The number came down to 20 and now he is saying that he will contest only from Chamundeshwari that has given him political rebirth,” he said.

“People have realised that they got nothing from Siddharamaiah though he was the CM for five years. They are waiting for the CM to contest from Chamundeshwari and this time, they will send him home. The voters will teach him a lesson for betraying me and my family,” he added.