Home » News » Legislative Council Polls from South Graduates Constituency and RS Polls: ‘I am ready for an understanding with Congress to take on BJP’ 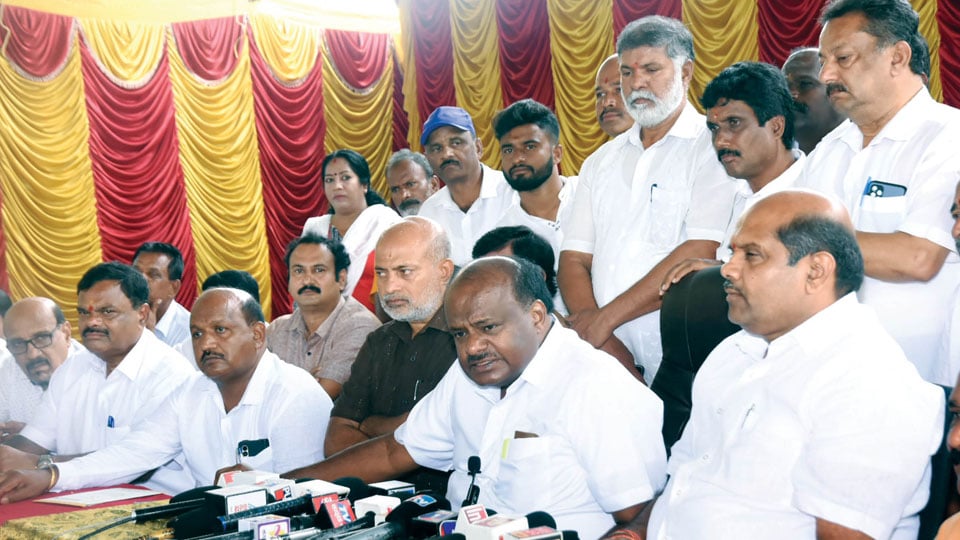 Legislative Council Polls from South Graduates Constituency and RS Polls: ‘I am ready for an understanding with Congress to take on BJP’

Addressing a press meet at the Office of K.R. Nagar MLA S.R. Mahesh on Ramavilas Road here this morning, Kumaraswamy, who is in the city since yesterday for campaigning on behalf of the party candidate for the Legislative Council polls from South Graduates Constituency H.K. Ramu, accused Siddharamaiah of indirectly helping the BJP by fielding the Congress party’s second candidate for the RS polls.

Noting that the JD(S), which has 32 MLAs, has fielded Kupendra Reddy as the party candidate and the Congress could have reached on a quid pro quo understanding with the JD(S) in order to defeat the BJP candidate for the fourth seat, Kumaraswamy alleged that Siddu thwarted any attempts of reaching an understanding between the two Opposition parties.

Holding Siddu responsible for the BJP securing over a hundred seats in the 2018 Assembly polls, HDK wanted Siddharamaiah to remove all filth in his mind and thus create a conducive atmosphere for throwing out the BJP from power in the forthcoming Assembly polls.

“I am ready for an understanding with the Congress to take on the BJP in RS polls. On one hand Congress leaders accuse the BJP Government as 40 percent Commission Government and on the other the Congress is indirectly helping the BJP by fielding its second candidate. The JD(S) is willing to exchange the second preferential votes with the Congress, provided the Congress responds favourably. Siddharamaiah, who is speaking of conscience votes, should first question his own conscience,” he said while reiterating that the first priority of the JD(S) is to defeat the BJP.

Replying to a question on the prospects of the JD(S) in the South Graduates Constituency, HDK said that the party is getting favourable response in all the four districts that come under the Constituency. The party is pulling out all stops for ensuring the victory of party candidate H.K. Ramu, he added.

Earlier in the day, Kumaraswamy visited Chamundeshwari temple atop the hill and offered special prayers.

Kumaraswamy carried out a brisk campaign in the city yesterday and sought votes for the party candidate H.K. Ramu for the Legislative Council polls from South Graduates Constituency.

HDK, who visited Vidyavardhaka Engineering College on Monday, highlighted the achievements of the coalition Government and appealed the voters to cast their ballots in favour of the party candidate.

Listing out his plans for the educated voters if the JD(S) is voted to power, he promised to address issues concerning graduates and the unemployed. He also argued that the JD(S) was the best option available for them for reddressal of problems and grievances.