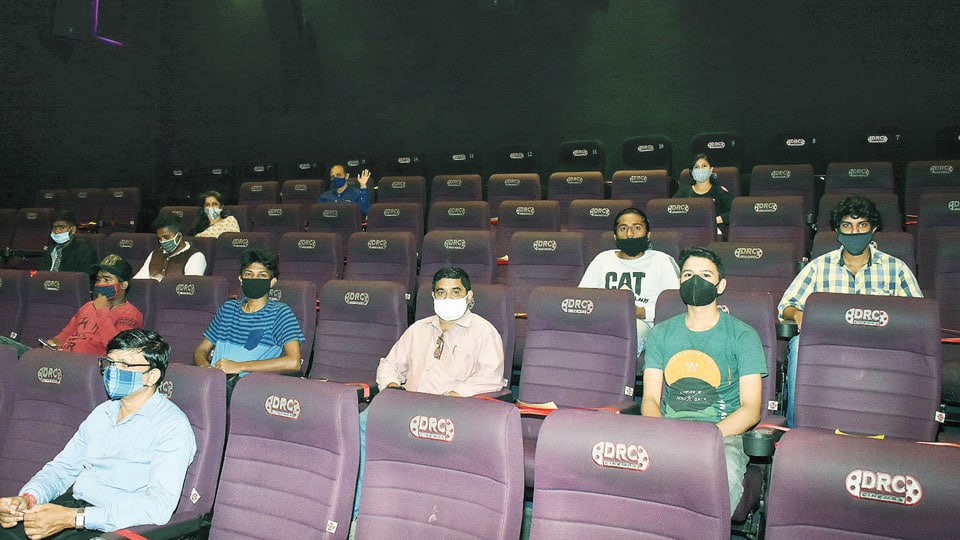 Mysore/Mysuru: DRC Cinemas in the city became the one and only cinema hall to screen movies after 225 days of closure following outbreak of COVID-19 pandemic.

Except this, no other single screen or multiplexes were re-opened in Mysuru today.

Not bothered about the number of audience, the DRC Cinemas was opened to the general public this morning but with Standard Operating Procedures (SOPs) issued by the Union Health Ministry in place in the wake of Coronavirus. As per the Central guidelines, entry was restricted only to 100 seats as against the total 200 seating capacity. The entire cinema hall was totally cleaned and disinfected. Under the SOPs, adequate physical distancing was maintained by keeping every alternative seat vacant. Adhesive tape was put on the vacant seat to maintain social distancing. The management had made provisions for sanitisers and hand washing facilities at the entrance. Only people with face masks were allowed entry.

As a prelude to grand re-opening of Cinemas, the DRC management in association with distributors had conducted a contest on Facebook asking theatre buffs as to which film they will like to see on the day of re-opening. A majority of them voted for ‘Love Mocktail’, a Kannada movie that ran housefull before ‘Janata Curfew’ imposed by the Government of India in the last week of March. Twenty persons, who voted for this movie, were offered free tickets at DRC but only 10 persons turned up this morning to see the movie.

When the multiplex was re-opened this morning, 20 persons bought tickets to watch the movie. Apart from this, ten persons who had won the contest were present. Although the response from the audience was lukewarm, the management is expecting the number to pick up in the coming days.

Sunitha, a movie buff, told Star of Mysore, “I was watching movies on television and mobile phones all these days. But watching the movie in a theatre is totally a different experience. For this reason, I have come to watch the movie in DRC.”