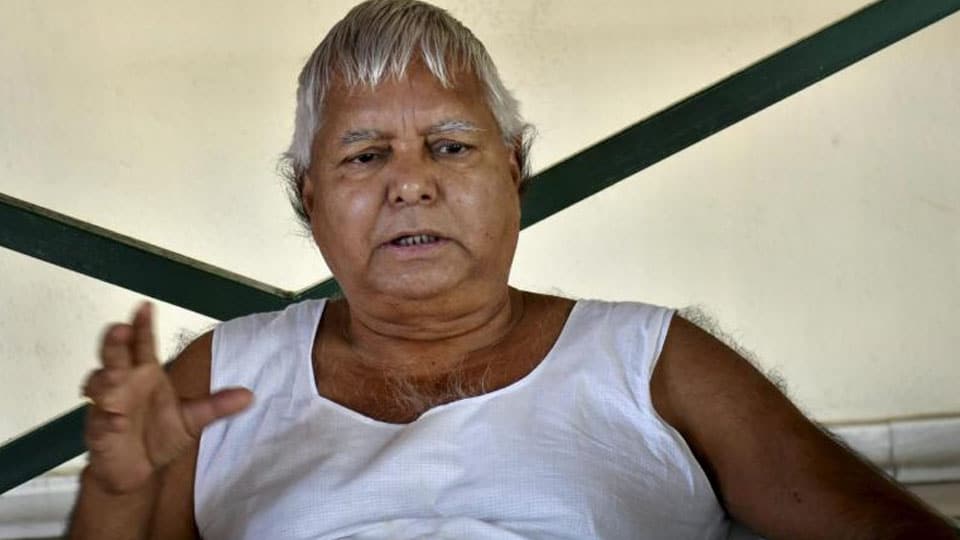 New Delhi:  Rashtriya Janata Dal (RJD) Chief Lalu Prasad was this morning convicted in the third fodder scam case by a special Central Bureau of Investigation (CBI) Court in Ranchi. This comes as another setback for the former Bihar CM, who is already serving a sentence in prison in connection with another fodder scam case. The quantum of sentence is likely to be announced tomorrow.

This case pertains to the alleged fraudulent withdrawal from the Chaibasa treasury in the early 1990s. An amount of about Rs.33.7 crore was allegedly drawn against a sanction amount of just Rs.7.1 lakh. Another former CM of Bihar, Jagannath Mishra, was also found guilty in the case by the special Court.

Reacting to the verdict, Lalu’s son and former Bihar Deputy CM Tejashwi Yadav said that “people of Bihar believe that Lalu ji is a hero.” He alleged that Bihar CM Nitish Kumar had played a role in framing Lalu in fodder scam case.

The Yadav scion added that legal options were still open for them. “This is not the final order,” he said. Lalu Prasad has already been convicted in two previous cases in the fodder scam, while Mishra was convicted in the first case. Lalu Prasad is presently lodged in Ranchi’s Birsa Munda jail. He had been convicted in the second fodder scam case on Dec. 23, following which the Court had handed him a three-and-a-half year sentence along with a fine of Rs.5 lakh on Jan.6.

This was his second conviction in the fodder scam, related to the fraudulent overnight withdrawal of about Rs.90 lakh from a Government treasury in Deoghar, then in undivided Bihar. His first conviction had come in September 2013, when the Court handed a guilty verdict to Lalu and his predecessor, Jagannath Mishra.

Lalu had received a sentence of five years in the first case. This sentence had made him the first elected representative in India to be ejected from office under the then-new changes to the anti-corruption law. In the run-up to the sentencing in the second case, Lalu’s lawyer had filed a leniency plea on the basis of his age and health problems. The lawyer had also argued that Lalu had no direct role in the second case.