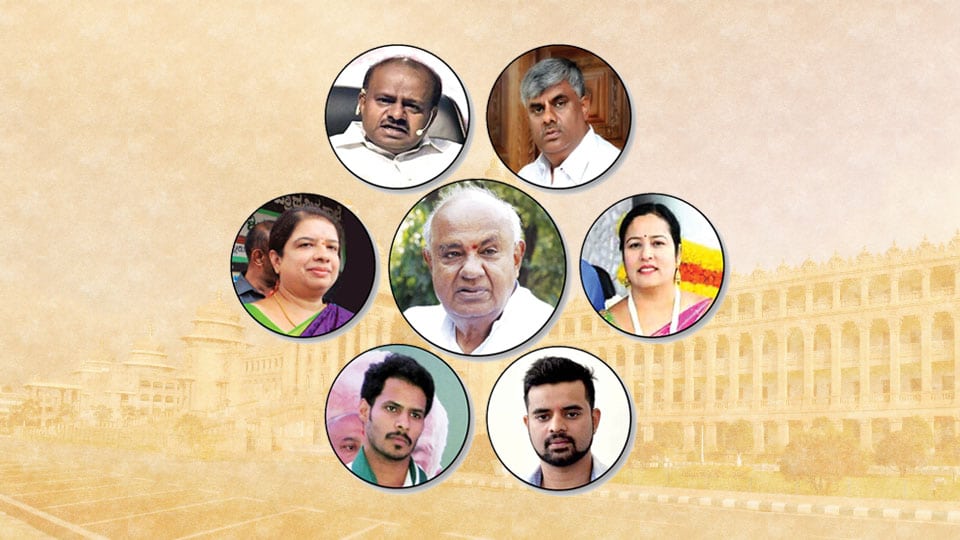 Dynasty Dominance: Karnataka is similar to Mulayam’s UP, Lalu’s Bihar

With the entry of the third generation into electoral politics, ‘dynasty’ politics by former Prime Minister H.D. Deve Gowda in Karnataka has come a full circle. Deve Gowda has fielded his two grandsons, Nikhil Kumaraswamy from Mandya and Prajwal Revanna for Hassan Lok Sabha seats.

Chief Minister H.D. Kumaraswamy, who is making all efforts to ensure the victory of his son Nikhil Kumaraswamy from Mandya, says, “The existence of regional parties lies with the dynastic politics.”

Deve Gowda, who has always remained in thick of things in Karnataka politics ever since he had successfully contested as an Independent candidate to the Assembly way back in 1960s and had associated with the Janata Parivar, however, ended up with floating his own family-centric party, the JD(S), in his over five-decade-long political career.

“I will remain in politics till my death,” he had said early last week when asked about the tough fight he will face in the hands of BJP in Tumakuru. Deve Gowda, hailing from the powerful Vokkaliga community that is strong in Old Mysuru area, had consistently won seats in Assembly and Lok Sabha elections for long. But the JD(S) might face a challenge from the BJP despite pre-poll alliance with coalition partner Congress.

The JD(S) which had secured 38 seats in the 224-member Karnataka Assembly in 2018, managed to form the Government with major partner Congress which had secured 80 seats. The BJP had fallen short marginally, securing 104 seats.

JD(S) was dominant securing 24 seats in the Vokkaliga belt. Deve Gowda’s two sons, one daughter-in-law (Anitha Kumaraswamy) besides close relatives, were among those who secured the seat. Under unprecedented churn of political confabulations, Deve Gowda’s son H.D. Kumaraswamy emerged to become the Chief Minister while his elder brother H.D. Revanna the PWD Minister. Revanna’s wife Bhavani is Hassan ZP member.

For the forthcoming 2019 elections, the JD(S) is contesting in seven LS seats, in alliance with the Congress and three of them are from his family. While Deve Gowda is contesting from Tumakuru Lok Sabha seat, his grandson Nikhil Kumaraswamy is fielded from key Mandya segment. In Hassan, where Deve Gowda won five elections, the party’s chief has fielded another grandson Prajwal Revanna, son of H.D. Revanna, and he (Deve Gowda) opted for Tumakuru.

Political analysts said that this move by the JD(S) chief may backfire as the young party candidates in Mandya and Hassan may face a tough task as well as Deve Gowda face a stiff challenge from BJP candidate G.S. Basavaraju in Tumakuru.

Strongly defending his decision to allow his family members to contest the Lok Sabha elections, the former Prime Minister had said that “they are not entering the politics through back door but with strong backing of the party.”

Stating that his grandsons are in the fray due to ‘popular demand’ of the party workers, the sitting members of the Lok Sabha Constituencies in Mandya and Hassan, Deve Gowda denied that he had favoured his kin over other party leaders. “These young leaders from the JD(S) family will emerge as strong leaders.”

Deve Gowda, unperturbed for grooming his family members at the cost of others says, “During my political career spanning over five decades, I had introduced hundreds of leaders to politics, who were not related to me.”

Strongly defending Deve Gowda’s decision to introduce his kin into politics, Suresh, a young entrepreneur from Kanakapura, said, “After suffering betrayal from those leaders, who were mentored by him, Deve Gowda might have decided to look towards his family members to rely upon.”

“There are several leaders, including C.M. Ibrahim, P.G.R. Sindhia, B.T. Lalitha Nayak, Siddharamaiah, Dr. H.C. Mahadevappa, Bandeppa Kashampur, who have made their presence felt in the State politics, who were not relatives of Deve Gowda,” Suresh added.

C.B. Patil, a political analyst, however, slammed Deve Gowda for fielding his two politically novice grandsons to contest the LS polls and said he started practicing another form of dynastic politics called ‘Concurrent Dynasty’ wherein several family members of his family are in politics at the same time. “We are witnessing in Karnataka what Mulayam Singh Yadav did in Uttar Pradesh (UP) and Lalu Prasad had done in Bihar. But how far this will be a success, this Lok Sabha election results will reveal on May 23,” he said.

“The tendency to bring sons and daughters into starts when one wants to retain the privilege and political power he enjoys and does not want it to slip out from one’s clutches,” Chandrashekar, a political observer in Kalaburagi, opined.

OTHER DYNASTIES IN PLAY

The tendency of thrusting upon the State or the country their family members is not limited to any one individual political leader or to a political party. Recalling that former CM Veerendra Patil, after vacating his LS seat, fielded his son-in-law Jawali from Kalaburagi, Chandrashekar, a political observer said, “Veerendra Patil’s son was also made the party candidate from Chincholi Assembly seat, once held by Patil.”

Meanwhile, several candidates, who are the family members of the Karnataka Assembly members, are also in the fray to contest. While BJP leader C.M. Udasi had managed to get the BJP ticket to his son Shivakumar Udasi in Haveri Lok Sabha seat, another BJP MLA, Shashikala Jolle’s husband is the saffron party’s candidate for Chikkodi Lok Sabha seat.

Congress strongman Mallikarjun Kharge, who is seeking re-election from Kalaburagi LS seat, is the father of Priyank Kharge, who is the Social Welfare Minister in the JD(S)-Congress coalition Government.

Congress candidate for Kolar Lok Sabha seat K.H. Muniyappa, who is seeking re-election to the Parliament for the successive eighth term, brought his daughter Roopa Shashidhar to State politics and made her an MLA in 2018 Assembly elections.

6 COMMENTS ON THIS POST To “Dynasty Dominance: Karnataka is similar to Mulayam’s UP, Lalu’s Bihar”