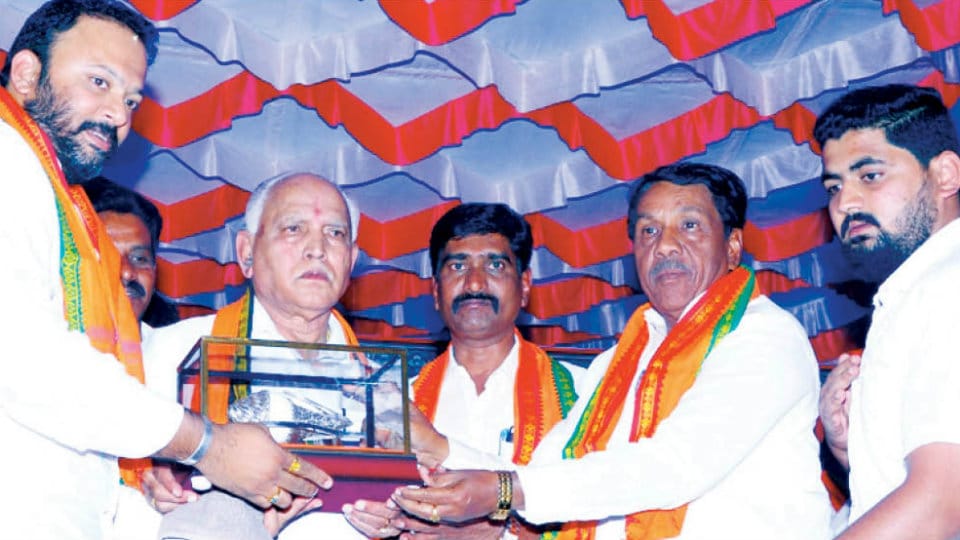 Mysuru: Alleging that CM Siddharamaiah’s arrogance had only increased after the Congress victory in Nanjangud and Gundlupet by-polls, former CM and State BJP President B.S. Yeddyurappa (BSY) has asked the electorate to vote out the Congress Government in the forthcoming Assembly polls.

Addressing the BJP’s Parivartana Rally at Vidyavardhaka Grounds here on Monday, Yeddyurappa questioned what all had happened to the Congress promises made to the people before the Nanjangud by poll.

Accusing Congress of insulting Dr. B.R. Ambedkar, he said that the State Congress leaders must feel ashamed for talking about Dr. Ambedkar and welfare of Dalits now. Accusing the Congress Govt. of misusing rice and wheat provided by the Centre for the State’s Anna Bhagya Scheme, BSY said that he would complain to the PM in this regard.

He also pooh-poohed the sudden spurt in the CM’s foundation-laying programmes saying that it was being done only for political gains and not out of genuine concern for the people.

Former Minister and senior BJP Leader V. Sreenivasa Prasad, is his speech, alleged that the Congress spent crores of rupees and adopted all unfair means to win Nanjangud and Gundlupet by-polls. Terming Siddharamaiah as a pseudo-socialist, Prasad maintained that he had taken a lot of pains for the all-round development of Nanjangud constituency, from which he got elected in 2008 and 2013.

Continuing his tirade against the CM, Prasad said the Congress, which has a century-old history, is losing one State after another and it was certain that Congress would be trounced in the forthcoming Assembly polls.

Terming the BJP’s State-wide Parivartana Yatra a grand success, Prasad sarcastically asked the CM to look at the Congress fate in UP, which was ruled by Congress for decades. Declaring that he had made a pledge to defeat the Congress in Nanjangud, Prasad appealed the electorate to elect the BJP candidate in the better interests of constituency.

MLA and former Minister Suresh Kumar, in his address, said that the CM was dividing the society on caste lines and many of his (CM) acts very much proved it. Stating that the tall promises made by Congress leaders ahead of Nanjangud by-poll have fallen flat once the poll was over, he asserted that the BJP would come back to power in the forthcoming Assembly polls.

Hundreds of youths who were T-Shirts featuring a picture of State BJP Yuva Morcha Vice-President Harshavardhan, who is also the son-in-law of Sreenivasa Prasad, drew the attention of the large crowd.