Home » Columns » Abracadabra By K. B. Ganapathy » State BJP heading for Harakiri in 2018 ? 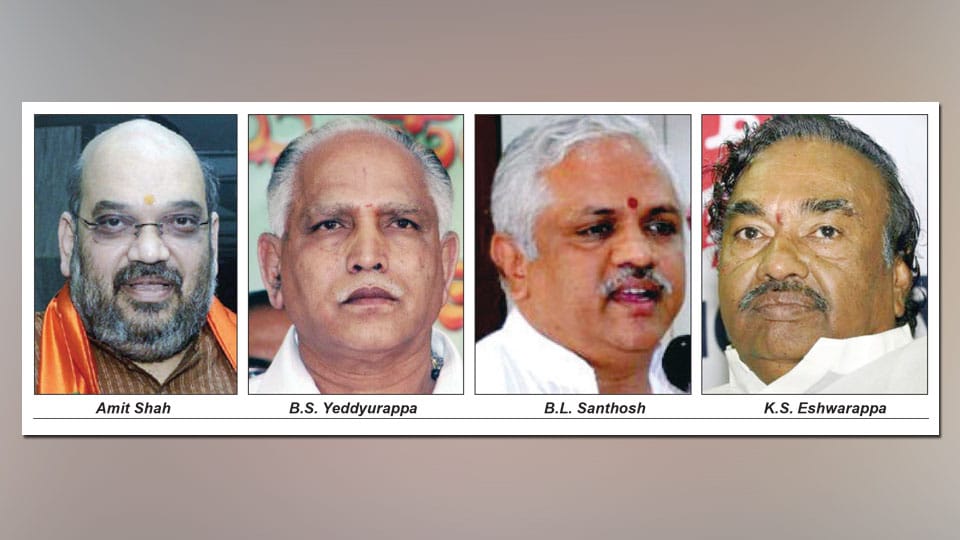 State BJP heading for Harakiri in 2018 ?

The BJP Leader of the Opposition in the State Legislative Council and former Deputy Chief Minister K.S. Eshwarappa is again at his game of bashing State BJP President and former Chief Minister B.S. Yeddyurappa. The State BJP does not seem to have learnt any lessons from its recent disgraceful defeat in the by-elections held for Nanjangud and Gundlupet constituencies. Truly, it is said that those who do not learn from the past mistakes are destined to repeat the same mistakes and perish. And perish BJP will, in the 2018 Assembly elections if it does not stand united under a single leader with total command and control, as seen in the State Congress, with guidance from the High Command.

Yesterday, Eshwarappa had said that even though BJP National President Amit Shah had appointed a 4-member Committee to revise the District BJP office-bearers’ list before February 10, 2017, till today the said Committee has not met even once. This is nothing but indiscipline on the part of State BJP, according to Eshwarappa.

There was no doubt Eshwarappa was targeting his old bete noire Yeddyurappa, hoping it would benefit him in the event BJP wins. But with his incessant targeting of Yeddyurappa for attack, he seems to forget he is simply diminishing BJP’s chances of winning, even with a wafer thin majority in the 2018 election.

The truth is that Amit Shah had constituted the 4-member Committee under the chairmanship of no less a person than National General Secretary of BJP Muralidhar Rao (who lives in Hyderabad) in January last year for the purpose about which Eshwarappa is going public like a child from whom a lollipop is snatched!

Commonsense, should tell Eshwarappa, that it is the responsibility of Muralidhar Rao to call the meeting of the 4-member Committee and revise the list of the District BJP office-bearers. If it is not done so far, Muralidhar Rao should be held responsible for the “indiscipline,” if it really is and not Yeddyurappa.

According to today’s report, Eshwarappa and BJP’s Nishtavanta Mukhandaru (BJP’s loyal leaders) are holding a meeting on Apr. 27, 2017 in Bengaluru to discuss this issue of “indiscipline.” The joke is that Eshwarappa is comparing this indiscipline to what is seen in Karnataka Congress — with Siddharamaiah saying he is going to be the Chief Minister again in 2018 despite Congress High Command allowing him only to lead the election brigade. Why bring in Congress here? You have guessed, I suppose.

READ ALSO  BJP has not resorted to Operation Lotus: BSY

Eshwarappa thinks by organising and strengthening the  ‘Sangolli Rayanna Brigade,’ a poor, pathetic imitation of Siddharamaiah’s mighty, united AHINDA (organisation of minorities, backward classes and dalits), he might emerge as CM of Karnataka like Siddharamaiah did, both being from the same Kuruba community. But Eshwarappa seems to blissfully forget, that for this to happen the BJP must win the election in the first place. If this Sangolli Rayanna Brigade does not deliver, then where will he be?

Wonder why he should explain the reason for his attending the Tumukur meet on 19th and be apologetic, saying he went there because he was invited by one Sogadu Shivanna and others. Strange! And he further asserts, as if challenging ‘someone’, that he would attend the 27th meeting in Bengaluru also, if invited. One wonders, if his conduct itself is not an act of indiscipline.

Voters, who are knowledgeable about politics,  are following these negative developments in Karnataka BJP and may shy away from supporting BJP fearing instability in the elected government.

There is a feeling among those who are following the BJP politics in the State that there must be a secret agenda at the highest level of BJP to sideline Yeddyurappa if BJP wins the 2018 elections. For example, as happened in Haryana and UP recently. Which is why BJP high-octane national leaders like Muralidhar Rao, State in-Charge (like Digvijay Singh of Congress) and Arun Kumar, BJP Organising General Secretary for Karnataka are doing nothing to end this voice of dissent though there is a danger of this voice destroying BJP’s chances of winning the 2018 elections.

There is also a loud whispering heard among the BJP sympathisers that some leaders in the higher level want this divisive, discordant voice raised by Eshwarappa to continue so that SHOULD the BJP win and there is rivalry for CM’s post between Eshwarappa and Yeddyurappa, then the BJP National High Command will  have to find a solution. It is here that a compromise candidate will be brought in as CM just as it happened recently in Haryana and UP. So the question is: Who that lucky BJP leader could be? And could it be that Eshwarappa is used as a pawn to justify this selection of a third person as the Chief Minister? Only time will tell. The political grapevine in Bengaluru says it could be Santoshji, [B.L. Santhosh, RSS Pracharak, Organising Secretary of BJP, Karnataka].

At present, the political situation indicates that people want a change in Bengaluru’s Vidhana Soudha, but what kind of change? BJP or JD(S)? Both parties seem to suffer from chinks in their armour to take on the Congress. BJP seems to forget that it is the voters who decide the fate of a party in the election, not their leaders.

A House divided cannot stand. United BJP will stand but if it remains divided like it is now, it is going to lose in 2018.

As I had written earlier, if no party gets the magic number in the 2018 elections, then we will surely get an alliance government of Congress and JD(S). BJP is a left alone party, branded as communal, and therefore it has to fight like a one-man army.

Amit Shah alone can do the miracle for Karnataka BJP, for sure.