Home » Columns » Abracadabra By K. B. Ganapathy » J&K: When is the final solution? 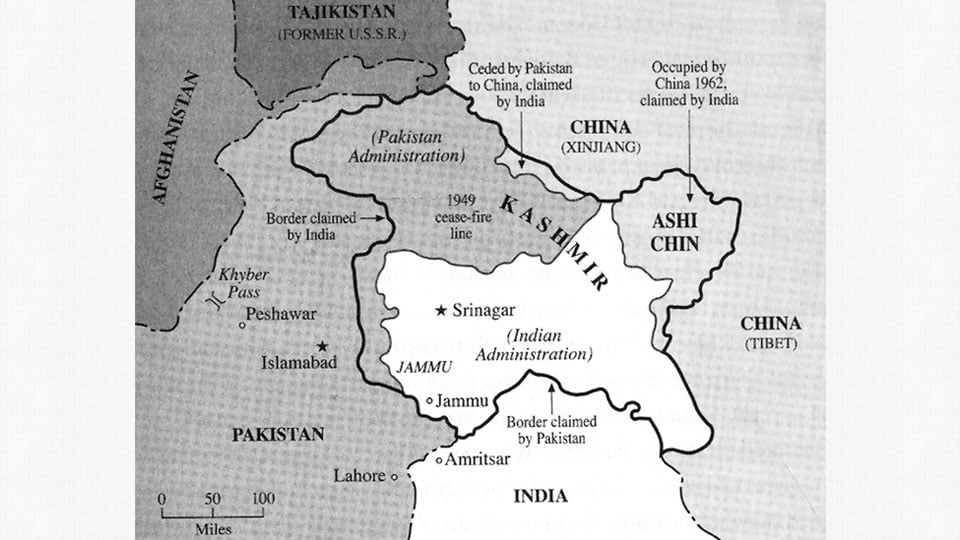 J&K: When is the final solution?

It was Napoleon Bonaparte who famously declared that in his dictionary there was no word called ‘impossible.’ Today, for we Indians too, it is imperative to forget the existence of the word ‘impossible’ in our lexicon in relation to the problems arising out of Jammu and Kashmir (J&K).

I was born before independence. I was told that India was divided to provide a separate country to Muslims following their demand, accompanied with violence, under the leadership of Mohammed Ali Jinnah. Hindus and Minorities like Christians, Sikhs, Buddhists, Jains and Parsis thought this would bring peace to our country, the truncated India. Sadly, No.

Reason: The then Maharaja of J&K, Maharaja Hari Singh, failed or delayed in taking a firm decision in exercising his right under the Partition Plan. His right to either join Indian Union or Pakistan by executing the Accession Treaty. This gave an opportunity to Pakistan to launch a military attack in the pseudo name of ‘tribal attack’ and occupy a part of Jammu and Kashmir now known as Pakistan Occupied Kashmir (POK)

When the ‘tribal attack’ began and was seen marching towards Srinagar, Raja Hari Singh panicked and sought the help of the Indian Union to throw the Pakistani forces out of Kashmir. While the Indian Army was being sent to the war-front, the Indian Government got the Maharaja to sign the Accession Treaty in order to legitimise sending  the armed forces to fight the Pakistani  Army.

Under the then Lt. General K.S Thimayya, Indian forces were successfully pushing the Pak forces back. But, unfortunately, our Prime Minister Nehru took the advice  of his friend and the First Governor-General of Independent India Lord Mountbatten and went to the United Nations (UN) with a complaint. Apparently, UN had no experience in dealing with such situations.

To India’s bad luck, the whole of Europe, England and America were wanting to pacify and please the Muslim world which was angry over the division of Arab-Palestine and creation of Israel, a Jewish country.

As a result, the UN without proper discussion and application of mind asked the warring Pakistan and India to ceasefire immediately, simultaneously converting India’s complaint into a dispute (territorial dispute) ignoring the Treaty of Accession signed by the Maharaja with the Indian Government. Both the countries, like frightened school boys obeying their headmaster, declared .

In the meanwhile, Pandit Nehru, wanting to become the world messiah of peace, got hold of some newly-independent countries from Colonialism and propounded the policy of ‘Non-Alignment.’ In his exuberance, he also made an unsolicited promise to the people of J&K to hold a plebiscite to ascertain the wishes of the people — to either join India or Pakistan. This is one of the historical blunders any sovereign country could make to its disgruntled section of the people. To use Mahatma Gandhi’s phrase said in some other context, this was a Himalayan blunder.

Nehru and his colleagues in the Government should have known that the UN did not have a role in the partition of British-India as it had with British-mandatory Palestine. The UN role was, therefore, limited to that of a peace-maker, not an arbiter. Sadly, India allowed the UN to convert India’s complaint into a dispute and we are carrying this as a painful albatross around our neck for the last 70 years.

India must remember that when the British Government published a plan for the partition of the Indian sub-continent on June 3, 1947, Pakistan was established on the basis of the idea that its Muslim population constituted a distinct nation, whose rights could be guaranteed only in a Muslim State. However, when it came to what remained as India after partition, the rights of majority Hindus were forgotten. It became a secular nation that guaranteed the rights of its religious minorities like Sikhs, Jains, Buddhists, Parsis and also millions of Muslims who chose to stay back in India. As a result Muslims got two ‘homelands’ — one Pakistan and another India.

According to a panellist in a TV discussion, many Muslims who were fighting for Pakistan along with Jinnah surprisingly chose to stay back when the partition took place. This was a paradox.

Be that as it may, Nehru was just 58-years-old without experience as a head of a huge democratic country that India was. However, his persona was a combination of an idealist, philosopher and a visionary. History records that at a meeting with US President Harry S. Truman in Oct. 1949, exactly two years after the ‘tribal attack’ from Pakistan in Kashmir, Prime Minister Nehru frankly told the American President that determining the fate of Kashmir “on a religious basis” would lead to destabilising India because that “would have a deeply unsettling effect upon  the Muslims living in India.”

This clearly shows that Nehru recognised that if Kashmir was excluded from India simply because it had a Muslim majority, then Indian Muslims all over India would think if Kashmir Muslims doubt the secular  character of India, why not they?

Unfortunately for India, the UN did not direct Pakistan to withdraw its ‘tribal’ raiders and vacate POK as Lord Mountbatten had hoped. Incidentally, Nehru agreed for a plebiscite not in the truncated Kashmir but only when Pakistan vacates the POK. But Pakistan never withdrew from POK and naturally now to ask for the 70-year-old plebiscite promise is irrelevant and ridiculous. If Kashmir is excluded from India, as Nehru told Truman “on a religious basis,” then it would be difficult for India to remain Constitutionally a Secular State in its present form. India might prefer a Qualified-Secularism instead to protect other minorities.

We have to realise that following Simla Agreement the ‘anti-multilateralist clause’ in it has effectively kept the UN out of any post-war diplomacy. The clause is as follows: “The two countries are resolved to settle their differences by peaceful means through bilateral negotiations or by any other peaceful means, mutually agreed upon between them.”

The Simla Agreement gave India right to reject any Pakistani move to bring in any other multi-lateral forum in the matter of J&K, including the UN. It was the Simla Agreement which transformed the previous ceasefire line into a more permanent Line of Control (LoC). Thus India no longer recognised the authority of UN to monitor the ceasefire line under 1949 Karachi Agreement.

In the circumstances and the changed geo-political situation, the Pulwama terrorist attack on Feb. 14, 2019 should be considered the provocation and the proverbial last straw that broke the camel’s back. Decisively challenge the constant terrorist attacks and also Pakistan Army firing across the LoC in violation of Simla Agreement.  India’s tolerance, except for meek retaliation and occasional surgical strikes of late, are no deterrence to Pak plan of inflicting a 1000-cuts on India till its mission is accomplished.

Therefore, if India fails to settle J&K issue this time or in the next five years, then we will have to wait for an Indian avatar of Vladimir Putin for the resolution of J&K issue. I remember, former Congress Prime Minister outside the dynasty, P.V. Narasimha Rao, saying, ‘The day Pakistan vacates POK, J&K problem is solved.’ Anyway, for now it is best to integrate J&K with India by removing the two obstructionist Articles in the Constitution — 370 & 35A. India does not need either Pakistan’s or Hurriyat’s permission for this.

12 COMMENTS ON THIS POST To “J&K: When is the final solution?”