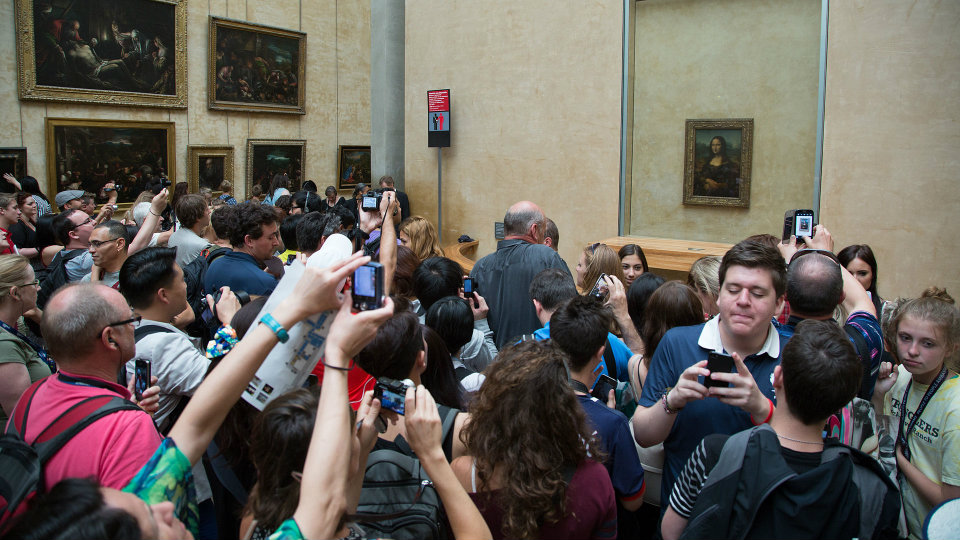 The Louvre, pronounced ‘Loovruth,’ covers more than 40 acres on the North bank of River Seine. Originally a small fort for the first King of France (or Paris) in about 1200 AD. The remains of this fort were excavated in the recent past and is open to tourists. It is beneath the main Louvre Museum and the stone fort walls can be seen like in any fort we see here in our country.

If you were to walk the Louvre through-and-through, it is a 9-mile walk along the galleries and corridors. At present, a small portion is occupied by the Government Department, otherwise it has over three lakh works of art – paintings, sculptures, ancient monuments, all original, from Egypt, Greece, Italy and the Orient wherever the French went on war, among the booty used to be these priceless, timeless works of art and culture of those countries.

Among famous sculptures, our guide was keen on showing us, were those from Greece, specially Venus and the Winged Victory in marble. Venus is also known as Aphrodite of Milos (see pic) is of 101 BC. She is a Roman Goddess of love, beauty, desire, sex, fertility, prosperity and victory. She was the mother of Roman people and Julius Caesar claimed her as his ancestor. She was a cult figure worshipped by Romans before Christianity swallowed the early Pagan religions of Europe.

The Winged Victory (of Samothrace) is also known as Nike of Samothrace, Hellenistic sculpture in marble of 2nd century BC. She is the Goddess of Victory in Greek religion before Christianity wiped it out. Tourists evince great interest in this because of the shoe brand Nike that we all wear as walking and sports shoes; these days even as formal shoes. I think it is an apt and absolutely befitting name for brand Nike. The mythological associations for the brand Nike are flight, victory and speed. It is not a tick (P) mark or a check mark approving the product as most people think. The logo of Nike products as we see it is inspired or derived from this marble sculpture and symbolises the single wing of the statue. It looks like a check mark if you look at it from one angle of the logo. The guide tells us that when it was brought to Paris it had only one wing (see pic.), the original. The other wing was later restored.

Among the paintings, the smallest seems to be the biggest too in the Museum that also fills the imagination of every tourist — it is Mona Lisa. The work of the multifaceted genius of an artist and scientist Leonardo da Vinci. No one’s visit to Louvre is complete without seeing this masterpiece of mystery and magic. Myth and legend seem to surround this painting of the size height 77 cm x width 55 cm. Not a big canvas. This is the most famous painting in the world and continues to fascinate both the public and art historians.

She is said to be a beautiful Florentine lady whose enigmatic smile haunts every viewer of the painting. Not me, anyway. As for me, I wonder if she is smiling or giving us a subtle, nuanced scowl! The artist has clothed her so completely, taking care not to lower her neck-line a little to reveal the cleavage of her fetching bosom well-hidden, the attention of the viewer is simply focused on her face. Hence we see ‘an enigmatic smile’ which after all may not be there at all! Art critics and commentators please note !!

Be that as it may, our guide tells us that this Mona Lisa is no ordinary woman of mystique beauty. When Da Vinci died in 1519, the King Francis I, possessed her. Thereafter, she ‘lived’ in Palaces Fontainebleau and Versailles and then moved to Louvre, the present Museum. However, Napoleon Bonaparte, on coming to power, cast his lustful eyes upon her and had her hung on his bedroom wall. Where else! However, during the Franco-Russian War and the World War II, it was taken away to some secret location for fear that the vodka drinking Russian Czar may take her to his bedroom like Napoleon did!

For long, it was just one of many valuable paintings that nobody talked about or wrote about. It was brought to Louvre and she remained there in a given slot in the Museum like any other painting. However, the painting became famous when in 1911 it was stolen and her slot in the Museum remained vacant; empty at the spot where it was hung on the wall. For two years nobody knew what happened. It was found with an Italian criminal and brought back to the Museum and placed on a wall dedicated to her in a gallery.

When we went there, the hall was crowded to every inch of space and the cheek-by-jowl visitors were surging in front of Mona Lisa, freaking out, though there were other masterpieces in that huge room. That was the attraction of Mona Lisa because after she was stolen and found, journalists, writers and art connoisseurs went berserk and sang paeans about Mona Lisa and her creator, her identity etc. Special security was put in place to prevent future thefts and the authorities decided not to move her out of the Museum at all.

But then entered the first lady of America Jacqueline Kennedy who charmed the French officials to allow Mona Lisa to tour Museums in New York and Washington DC. So it was and it was considered the first ever ‘Museum blockbuster exhibition’ in America. Well, after completing her American sojourn she returned to Paris safely so that I could see her and get my toe crushed in the milling crowd at the Louvre. Alleluia!

Some leaders suffer from narcissism and want their names given to important institutions and buildings. Like in India during Nehru-

Gandhi rule. So it was during the era of Napoleon Bonaparte. He had the Louvre complex renamed after him in his honour and soon Museum Napoleon started getting more artistic spoils of war — thanks to his victorious march across the continent. But then, as is happening in India, after Bonaparte died, the original name of the Museum, Louvre, came back. Like the original name ‘Nagarahole Game Sanctuary’ came back here in Karnataka. S. Bangarappa when he was the Chief Minister had changed the native name Nagarahole to Rajiv Gandhi National Park paying his debt of gratitude for making him the Chief Minister at the cost of our pride and sentiment.