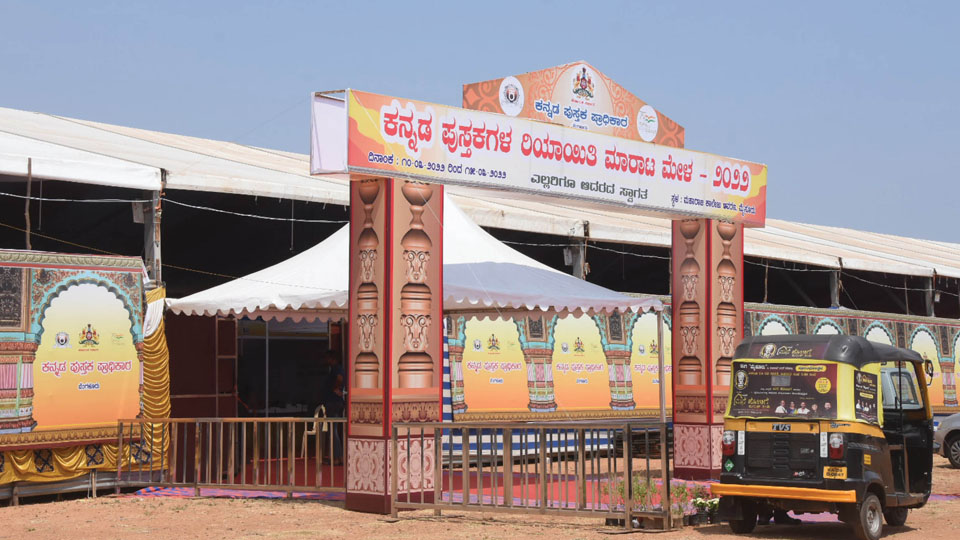 Mysore/Mysuru: The discount sale of Kannada books, organised by the Kannada Book Authority at the sprawling Maharaja’s College Ground, has been a success as many book-lovers are visiting the Mela for buying books that are up for sale with discounts ranging from 20 to 50 percent.

On the first day on Thursday, when the Book Mela was launched, the publishers did a total business of Rs. 1.35 lakh and on the second day yesterday, it improved further to Rs. 2.50 lakh, totalling a business of Rs. 3.85 lakh.

More than 30 private publishers and publications division of various Government Departments, agencies, bodies and Universities are taking part in this Mela, which concludes on Mar. 15. Kannada Book Authority Chairman Dr. M.N. Nandeesh Hanche said that this is the second such Book Mela being organised in Mysuru.

Pointing out that the first one was organised at the same venue of Maharaja’s College Ground in 2011 when poet Dr. Siddalingaiah was the Chairman of Kannada Book Authority, he expressed happiness that the first two days of the Mela has received a good response with book-lovers visiting the stalls in large numbers.

The cultural events organised on the evenings of all days too have proved to be a hit and a good number of people are flocking the venue for purchase of books of their like, which are available in thousands.

University of Mysore Prasaranga Deputy Director Dr. B.S. Anilkumar said that the University has put up books under over 800 titles. Maintaining that there is a good response for the Prasaranga stall, he said that a total of Rs. 22,000 business was done in the first two days of the Mela and they are hoping that the business may pick up further in the next four days, with Saturday and Sunday being                          Government holidays.