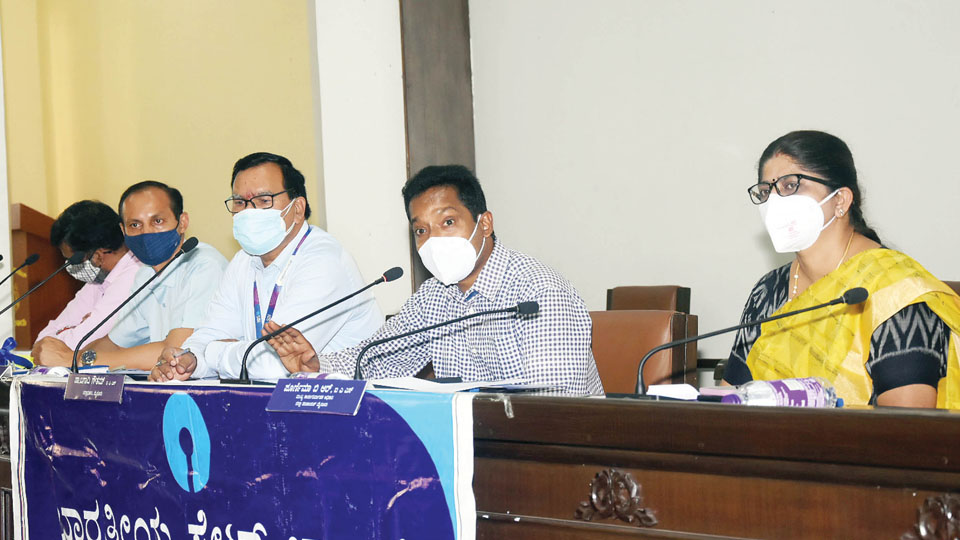 Mysore/Mysuru: Taking Bank officials to task for high rate of pendency of applications in Banks pertaining to approval of Micro-credit to small entrepreneurs, Deputy Commissioner (DC) Dr. Bagadi Gautham questioned some banks for the inordinate delay in the disposal of applications. The DC  was addressing the District Level Review Committee (DLRC) meeting of District Lead Bank at the ZP Hall here yesterday.

The irked DC warned to close the accounts of various Government Departments in some private banks in case they fail to implement the welfare schemes launched by the Government by offering loans to various sections of the society.

Pointing out that there were over 1,000 applications pending in Banks, out of which HDFC Bank alone accounted for a majority of  applications, Dr. Bagadi Gautham rebuked the bank officials for the delay  in even releasing Rs.10,000 loan extended to street vendors.

When the DC raised a few queries on the reasons for delay, the response was either silence or a standard reply from the bank representatives that the issue will be brought to the notice of the higher authorities. He reprimanded them for attending the meeting without any preparation.

The DC questioned the Karnataka Gramin Bank representative on the reasons for rejection of loan applications of beneficiaries of various State and Central Government schemes.

Cautioning the Banks against any undue delay in release of loans, Dr. Bagadi Gautham warned that he would be forced to order closure of Bank accounts of various Government Departments, bodies and agencies, if the banks continued with their negligent and non-cooperative attitude.

He further said that he would write to the RBI on the pending of applications at Banks concerning advancement of loans under PM-SVANidhi scheme (PM Street Vendors Atma Nirbhar Nidhi).

Taking Karnataka Bank officials to task for their failure to release loans, the DC pointed out that farmers were staging protests in front of the DC’s office for lapses in release of loans and extension of other benefits.

He also came down on the Bank for forcing the customers to credit a minimum of Rs.1,000  even for zero balance accounts.

He questioned Banks on why they were seeking security for Kisan Credit cards and why they were refusing to link Milk Dairy accounts of farmers.