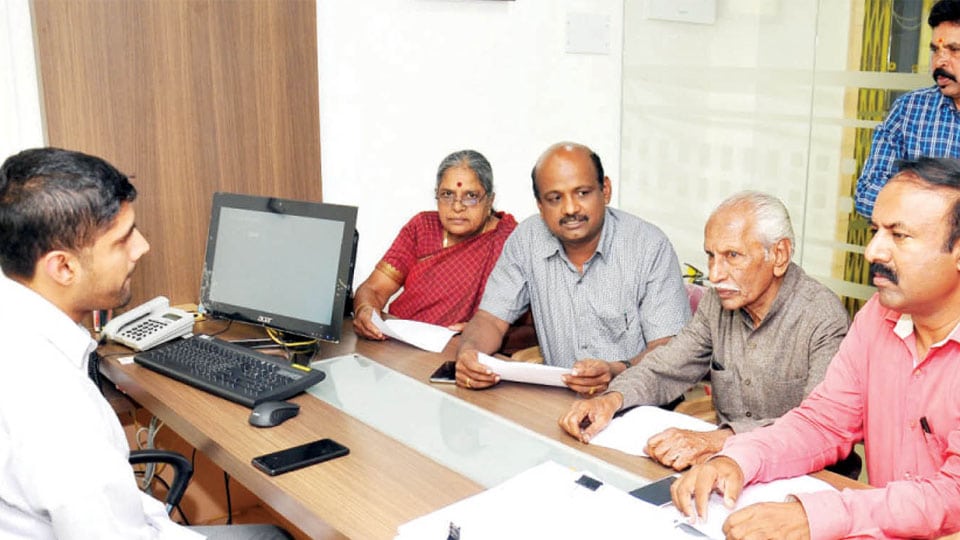 The members first visited Vijaya Bank City Head Office on D. Devaraj Urs Road and reviewed the progress made in Kannada implementation by scrutinising Bank application forms, correspondence letters, Kannada notifications etc. They directed the Bank authorities to correspond with customers in Kannada only as far as possible.

Later, they visited Head Post Office on Ashoka Road and reviewed the action taken in respect of the directions issued during their last visit.

There after, the members visited the City Railway Station and reviewed usage of Kannada in official work.

Later speaking to press persons, the Committee Member S.R. Sudarshan said that he felt happy to see Railway name-boards in Kannada, usage of Kannada in official work, display of pictures throwing light on the richness of Kannada culture etc.

Stating that the Railways has implemented the directions of the Committee, he said that the Railway officials have promised to implement Kannada to the fullest extent possible in the coming days. Referring to Vijaya Bank, he said that the Bank authorities have met the instructions issued last time, by bringing out challans, application forms and other Bank forms in Kannada. The Bank has been directed to use Kannada seals as well, he added.

Likewise, the Head Post Office too is making efforts to use Kannada in its correspondence. As most of the name-boards were in English, the Postal authorities were directed to install Kannada name-boards as well, Sudarshan added.