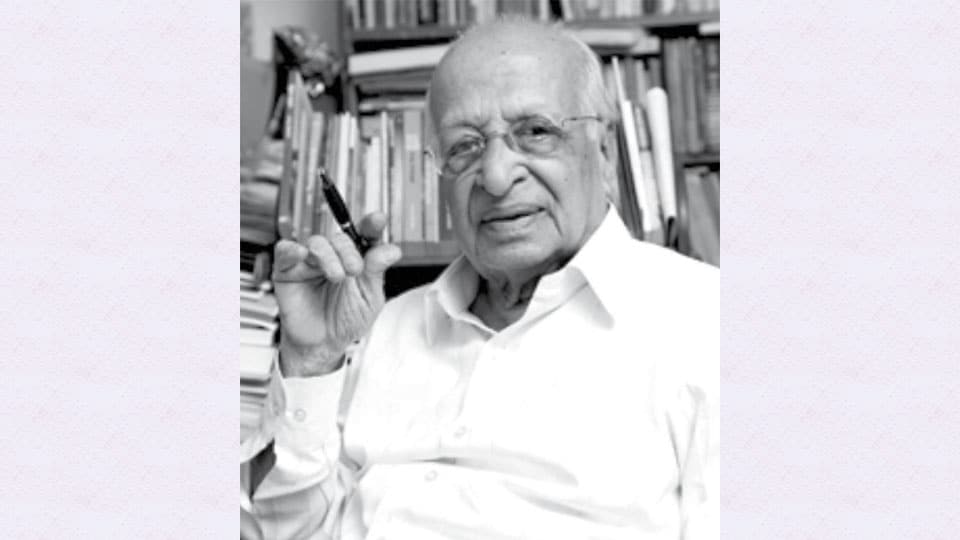 For over half a century (54 years to be accurate), the incessant toil and hard work of a group of Kannada grammarians and linguists saw the publication of what is probably the most comprehensive Kannada dictionary till date — a tome which runs to about 9,000 pages. The man who led this herculean effort was a Kannada linguist, grammarian, teacher, writer and lexicographer all rolled into one. He is today 107 years of age and has lived through two World Wars and two Pandemics and is without doubt the Guardian Angel of Kannada language — the very ‘Jiva’ of Kannada — Ganjam Venkatasubbiah (G. Venkatasubbiah, fondly called GV).  —Ed

Ganjam Venkatasubbiah is without doubt one of Kannada language’s guardian angels. Born on 23rd of August, 1913 in Kaygonahalli of Mandya district, G. Venkatasubbiah (GV) was the second among eight children to parents Thimmannayya and Subbamma. His father was a renowned Sanskrit and Kannada scholar who taught Kannada at the local Government School. Because of frequent transfers, GV’s childhood was spent in towns like Bannur, Madhugiri, before coming to Mysore for his College education.

GV spent his childhood at Madhugiri between 1927-1930 and was privy to many a great people visiting the town. One such was Mahatma Gandhi who visited the town and stayed in the Inspection Bungalow (IB). GV as a young scout cadet had the distinction of being posted outside Gandhiji’s room and had the rare privilege of talking with the Father of the Nation for a few minutes.

Similarly, he was also fortunate enough to see and listen to Maasti Venkatesh Iyengar for the first time when he visited Madhugiri. These childhood experiences would mould his future endeavours. His classmates included the likes of K.S. Narayanaswami, the editor of ‘Gandhi Sahitya Samputa’ and K.S. Krishnaswami, an eminent economist of his time who would eventually become the Deputy Governor of Reserve Bank of India (RBI) and Vice-President of World Bank.

GV joined Yuvaraja College, Mysore, to pursue Intermediate course and selected courses in Ancient History, Sanskrit and Kannada. Here he came under the influence of K.V. Puttappa (Kuvempu) who imbibed in him a love for old Kannada.

He gained admission to the B.A. Honours course in 1933 and came under the tutelage of Prof. T.S. Venkanayya, who taught “Pampa Bharata”, Prof. D.L. Narasimachar, who taught “Editorial Science”, Prof. T.N. Srikantaiah, who taught “Kavyamimamse” and Dr. S. Srikanta Sastri, who taught “Karnataka History”. During the “Mysore Student Union Celebrations”, GV was the proud recipient of numerous awards both in academic as well as in extra-curricular activities. While conferring these awards upon young GV, Prof. S. Radhakrishnan patted him on his shoulder and commended him for his excellence in extracurricular pursuits.

Misses scholarship by half a mark

Venkatasubbiah stood among the top scorers in B. A. Honours. However, a difference of half a mark rendered him ineligible for a scholarship. Though disappointed at not receiving the scholarship, the turn of events was not without a silver lining. Principal of Maharaja’s College, Prof. J.C. Rollo came to his rescue and made sure that GV obtained a scholarship which he so well deserved, thus paving way for higher studies. He was also recipient of the “Honnashetty Award” for the best essay in Kannada in a competition held between Central College, Bangalore and Maharaja’s College, Mysore.

GV joined M.A. course in 1936. His final exam viva-voce was conducted by a team consisting of Prof. B.M. Srikantaiah, Prof. T.S. Venkanayya and Prof. Benegal Rama Rao. This formidable trio conducted the viva-voce examination for two-and-a-half hours and at the end concluded by saying that they were placing the future of Kannada language in GV’s hands!

GV was awarded a Gold Medal in M.A. and this was to be conferred upon him at the Mysore University Convocation in 1937. On the stage were His Highness Nalwadi Krishnaraja Wadiyar and the doyen of Kannada literature D.V. Gundappa sitting in the VIP row. The young GV was sitting in the first row of Gold medallists with one leg crossed over another. The ever-observant DVG saw this and signalled to him to uncross his legs, as it was a sign of disrespect to the Maharaja.  According to GV, this was a lesson in propriety. After obtaining MA degree in Kannada, he also got a Bachelor’s degree in Teaching.

G. Venkatasubbiah (GV) married Lakshmi in the 1930s in Mandya. His wife, along with other ladies of Bangalore, started “Mahila Seva Samaja,” a social organisation, which was inaugurated by His Highness Sri Jayachamaraja Wadiyar. She passed away at the age of 92 years in 2018. The couple had completed nearly eight decades of marriage by then!

By 1939, Second World War was round the corner and securing a steady job became an increasingly arduous task. Unable to secure proper employment, GV began to give private tuitions to poor students earning nominal amounts barely enough to run the family. His oratorical skills, now famous, earned him several invitations across Mysore and Mandya to deliver lectures. At one such event in Mandya, hearing his lecture and deeply impressed by the depth of knowledge, the then Deputy Commissioner of Mandya S.J. Mehkri pleaded with him to accept a teaching position at the local Municipal High School for a salary of thirty rupees. The catch was that he had been invited to teach not Kannada but English! The need for money being absolute, GV continued in this position for six months.

Following his stint at Mandya, GV was offered a position at Bangalore High School. Here also he was requested to teach not Kannada but English. It is indeed ironical that Kannada language’s towering giant had his humble beginnings as a teacher of English. While at Bangalore High School, he inspired his friend Ramachandra Sharma to pen Kannada poetry. Heeding his advice, Sharma brought forth his first book titled “Hrudayageethe” in 1952 with a preface by Gopalakrishna Adiga and Subbanna R. Ekkundi.

GV is a pioneer among Kannada lecturers to wear a western style suit and enter the lecture hall. Till then the Kannada pundits wore the native ethnic attire. The teaching career of GV culminated in becoming the Principal of Vijaya Evening College, Bangalore. Here GV would serve as Lecturer, Professor and Principal of the Evening College. He is best remembered for starting the student magazine “Utsaha.”  His lectures in the classroom left many a student spell-bound and transfixed. His repertoire of Kannada literature and the unique ability to bring to life these characters and events in the classroom won him a great following. His students reminisce with great fondness that GV’s teaching was not purely confined to the language and its vicissitudes at hand, but rather the philosophical connotations implied therein. This was what set him apart from the rest.

When GV completed sixty years of age, felicitation volume titled “Sahityajeevi” was published. Similarly, on his ninetieth year, “Shabdasagara” was released. In 2011, book titled “Vidvajeevita” was brought out in his honour under the editorship of Padekallu Vishnu Bhat. His centenary year was a momentous occasion and was marked by many events and functions across Karnataka. Many felicitation volumes were presented to him. The Centenary Year Welcome Committee under the Editorship of Dr. P. V. Narayan brought forth a centenary felicitation volume titled “Shatanamana.” In recognition of his eminent status in Kannada literature, he was chosen to preside over the Kannada Sahitya Sammelan at Bangalore in 2011.

In what seemed more than a mere coincidence, exactly one hundred years after Reverend Ferdinand Kittel authored the first Kannada dictionary,  GV wrote “Kannada Nighantu Shastra Parichaya” in 1993-94 which was an introduction to  dictionary science or lexicography in Kannada.

A seminal work, it was incidentally brought out at the behest of Dr. S. Ramegowda’s (then Vice-Chancellor of Karnatak University) suggestion during the Centenary Celebration of Prof. S.S. Basavanala. This work was further expanded by Kannada Pustaka Pradhikara in a book titled “Kannada Nighantu Parivara.” Prism Publishers brought out a book with a collection of articles titled “Kannada Lexicography and other articles” in English. His seminal work “Igo Kannada” is adjudged as a socio-linguistic dictionary. It encompasses an eclectic mix of Kannada idioms, phrases, usages, fables and serves as an example to other languages.

While at the helm of affairs, GV increased its annual grant from the Government several fold. Subsequently, he became Editor of Kannada – Kannada Dictionary project. He was involved in Kannada Encyclopaedia Project, Sahitya Sammelana (Literary Fest) at Karwar and Shravanabelagola and as the Editor of Kannada Sahitya Parishat’s monthly magazine “Kannada Nudi.” In his 104th year, GV agreed to grace a book launch event at Mythic Society, Bangalore, where his teacher  S. Srikanta Sastri’s Collected English writings (in two volumes) titled “SRIKANTHAYANA” – Vol I and II were released to the public at a gala event. Here he reminisced his years as a student under Dr. S. Srikanta Sastri at Maharaja’s College, Mysore.

A documentary on GV was brought out in 2010 by Dharmasthala Manjunatha Dharmothana Trust titled ‘Lipyantara.” Gold medals have been instituted in his name at both Mysore and Bangalore Universities. A corpus of rupees one lakh is set aside by the Mico-Bosch Kannada Sangha in Prof. G. Venkatasubbiah’s name, the interest from which is utilised to award an extraordinary student scholar of Kannada University, Hampi, securing a Ph.D degree.

GV is the recipient of numerous awards and titles. Many felicitation volumes have been brought out in his honour. Till date, he has received twenty-two awards and the most prestigious ones among them are Karnataka Sahitya Academy Award, Rajyothsava Award, Nadoja honour (D. Litt.), Maasti Award, K.M. Munshi Award, Pampa Prashasthi and President of India honour for the oldest living achiever and alumni of University of Mysore.

In 2013, Rani Chennamma University conferred on GV an Honorary Doctorate in recognition of his lifetime contribution to Kannada Lexicography. Government of India conferred on GV the Padmashri in 2017.

GV’s work spanning over seven decades is a testament to his unswerving dedication to the cause of Kannada language and grammar. Yet, in his own words, plenty more needs to be done — in terms of updation of the dictionary, its digitisation and the addition of newer terminologies to the language. It is indeed a sad truth that the fruit of nearly 54 years of toil (running close to 9,000 pages) has not seen print or an updation since its second reprint, several decades back!