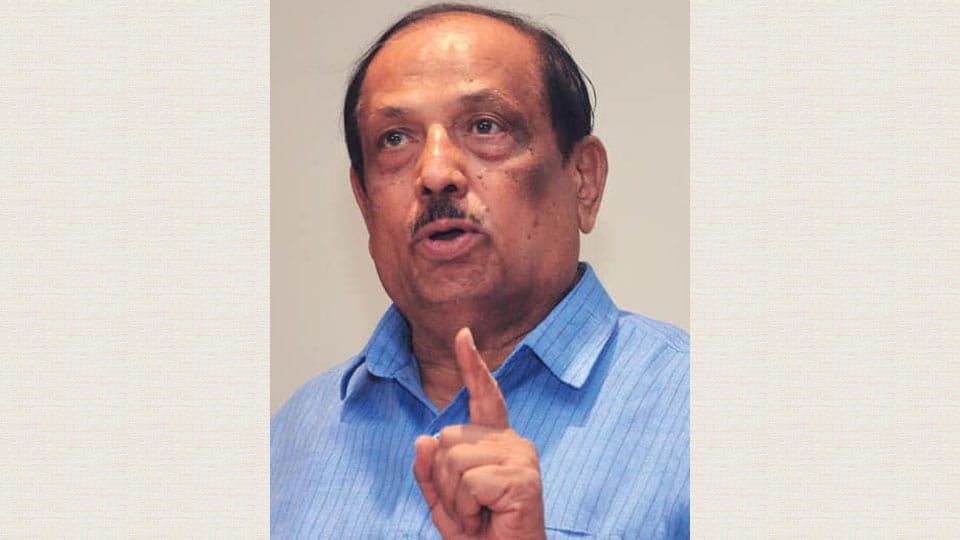 The first District Superintendent of Police I came in touch with as a journalist in 1978, when we started the publication of Star of Mysore eveninger, was S.A. Subbaiah, IPS.  The second was L. Revannasiddaiah, IPS.

I can never forget two IPS Officers who served in Mysore. One, of course, is L. Revannasiddaiah and another Kempaiah IPS. If only our country had officers of that calibre and commitment to serve the society, the Policing administration would be at much higher level than what we see today. I shall write about Kempaiah later. But for now, it is about Revannasiddaiah IPS as I know him.

A gentleman officer without any air about his position when he interacted with commoners irrespective of the individual’s social, financial or official status. A good listener to his supplicants before he reacted. A rare quality for a senior district officer who, my experience of 43 years says, generally press the call-bell and ask for the immediate subordinate to pass on the buck to him and beam a smile. But Revannasiddaiah  will press the call-bell only after having heard the person with a problem. This I recall even today because I was the person with problems who went to him three or four times.

Once a doctor came to me with an inland letter where the writer had demanded Rs. 10 lakh to be delivered, put in a garbage bin, near Vijaya Newspaper Press, behind Gayathri Talkies on a certain day and time. Otherwise, the letter warned that the doctor’s only son would be kidnapped. He did not want to go to the Police as the criminals might be watching him. He requested me to help. Since I knew Revannasiddaiah, SP, I went to his office. When I told him it was confidential, a good man that he is, immediately asked the guard to close the door. He patiently heard me, discussed the problem, then he said that he would entrust this job to his two trusted officers. Thereafter, he called them in and briefed them. The plan was set. But nobody came to take the ‘suitcase’. Instead, a phone came changing the location to the Kalamandira Gate area with details. Fortunately, for a week there was no action from the criminals. All was well for the good doctor that ended well.

Not that other SPs or Commissioners were indifferent. Here is one more example where there was an IPS Officer, who did not pass the buck but listened to me personally and then gave me relief.

One night a lady lecturer and her husband came to my house, because I was Star of Mysore Editor, requesting me to help her with Police who did not seem to help her in tracing her high school going daughter who did not come home and their search for her turned futile. It was 10.30 pm in the night. Well, what could I do? I did not know the new SP but took a chance and called him. After the call was filtered, I was connected, probably because of ‘Star of Mysore.’ I told him frankly the problem could not be explained on telephone and hence if I could visit him. Reluctantly he agreed. I went and when I explained, he was furious with his men who were apparently “for tomorrow.” No, the SP shouted. “I have given you the clues. I want the girl returned to her parents tonight, for tomorrow would be too late.” The good SP then sent me away with assurance. Within an hour or so, I get the good news from the Police! That night I learnt a management lesson: If the Boss means business, business will be done.

Now, to revert to Revannasiddaiah, he was the SP of Mysore from 8.8.1979 to 3.5.1982 and served our city well. Hardly any crime, even complex ones, went undetected. He is an officer who led from the front. Once when a running feud with rioting took place between two groups in Vidyaranyapuram area, he was there on the spot to bring the situation under control. It was then that he also made serendipitous disclosure that the murder that had taken place at the Co-operative Bank in  Gandhi Square a few days back indeed had a different dimension and angle as indicated in a report in Mysooru Mithra, the sister publication of Star of Mysore. That murder mystery was soon cracked. The credit should go to Revannasiddaiah’s genius in handling the case. I think he was given the Chief Minister’s Gold Medal for Excellence in Investigation in 1980 for investigating this sensational murder case.

Be that as it may, as I know he was not a ‘yes-no; let-us-see; wait till tomorrow etc.,’ kind of an officer. He knew his mind well. Also, his responsibility. As a result, the criminals, anti-social elements and local dadas who managed the local Police found themselves uncomfortable during his period. He had instilled fear in the minds of these criminals and also the potential dons.

Once there was a confrontation between two groups — one so-called upper caste, other lower caste — at a village in Mysore Taluk. The humble hutments of the poor were burnt down and menfolks were attacked. As a result, they vacated the village and ran away. The following morning at 9 am, Revannasiddaiah, SP, came to my office in Saraswathipuram and called me to his car. He said he was going to that village and would like me to go with him. I jumped at the opportunity. Later, I wrote a detailed report as the eyes, ears and hearts of our reader. The SP commended me for the report.

Another time, he took me to Kollegal where a murder had taken place which made big news. I saw an IB Officer, who was there to collect intelligence about that murder. In a sense, the crime reporting during the time of Revannasiddaiah was so good, it helped increase the circulation of Star of Mysore. I must also thank one crime reporter Girish Nikkam, who had just arrived in Mysore after completing his studies in Bombay with specialisation in crime reporting.

Now retired, Revannasiddaiah belonged to 1965 IPS batch. No wonder, over the years, he rose to the highest office in the Police Department. He served as the Director General and Inspector General of Karnataka Police. Later, he became the Additional Director of Central Bureau of Investigation (CBI). He was also the Commissioner of Bangalore City Police (1997-99).

He was an innovative officer who was responsible for the introduction of the Police patrolling units, Hoysala (like we have Garuda in Mysore) and Helpline for women and children. Now, he is the President of the Foundation for Restoring Human Dignity (FORHD), an NGO that looks after the distressed children and women belonging to the families of convicts. I had visited Mysore Jail with him once and was surprised at the care and concern he had shown to the jail inmates.

Unfortunately or fortunately (I do not know which of the two), Revannasiddaiah could not make a success of his political adventure, losing two elections, once as a Congress candidate and another as a BJP candidate from Chamundeshwari and Varuna Constituencies respectively. A successful Police Officer, ironically failed as a politician.