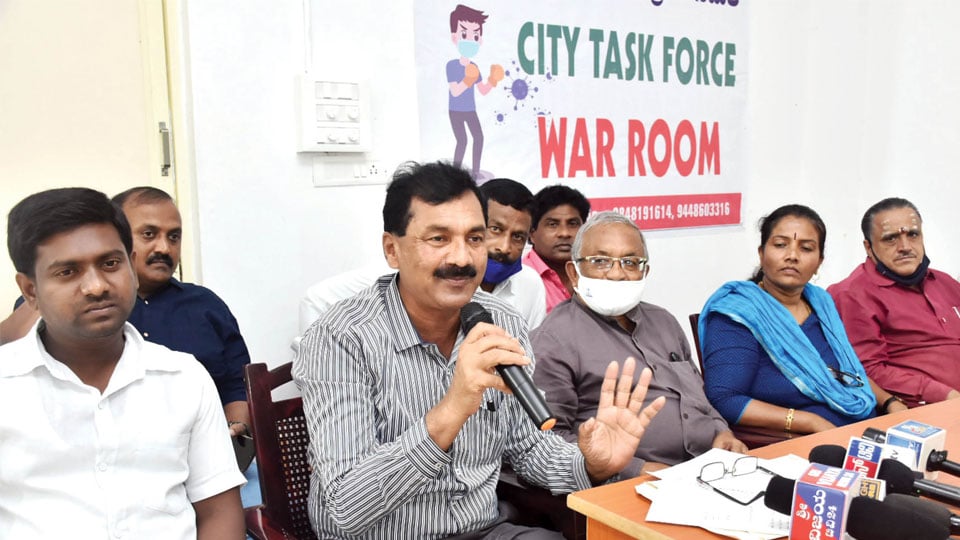 Congress demands resignation of Ministers B. Sriramulu and Dr.K. Sudhakar

Mysore/Mysuru: Holding BJP Government directly responsible for the suicidal death of Nanjangud  Taluk Health Officer (THO) Dr. S.R. Nagendra, Congress spokesperson M. Lakshmana has demanded immediate resignation of  Health Minister B. Sriramulu and Medical Education Minister Dr. K. Sudhakar for their failure in addressing the issues raised by doctors who are at the frontline in the battle against the deadly COVID-19 pandemic.

Addressing a press meet at Congress Bhavan near City Railway Station here this morning, Lakshmana said that 1,150 of the 2,160 posts in the Health Department of Mysuru District have remained vacant for years and this has had a telling effect on the health care system. Urging the Government to fill up all vacant posts in the Health Department across the State, he maintained that the shortage of medical staff has resulted in a big burden on serving medical officers. Alleging that unrealistic tasks set out by the higher authorities had led to the cause of Nanjangud THO’s death, he reiterated his demand for the resignations of Ministers B. Sriramulu and Dr. K. Sudhakar for their failure in addressing COVID-19 issues.

Citing the example of Congress Minister K.J. George,  who quit from the Siddharamaiah Government after the then Opposition BJP sought his dismissal over the suicidal death of Dy.SP M.K. Ganapathy in 2016, Lakshmana wanted the two Ministers to quit on moral grounds for the death of Dr. Nagendra. He also demanded a thorough probe by a sitting HC Judge or by the CBI in order to find out the circumstances that led to the death of Dr. Nagendra.

Criticising CM Yediyurappa who had come to the district for offering bagina to Kabini Dam for not visiting the family of the deceased THO, he said that the CM, as the head of the State, should have consoled Dr. Nagendra’s family members and held talks with the striking doctors for restoring confidence  in them.

Referring to KPCC Chief D.K. Shivakumar’s phone-tapping charges against the BJP Government, Lakshmana said that Home Minister Basavaraj Bommai’s reply to the charges were nothing but childish. Reminding the BJP that the previous JD(S)-Congress coalition Government had ordered a probe into allegations of phone tapping of several Mutt Seers during ‘Operation Lotus’ last year, he wanted the present Government too to order an impartial probe into the phone tapping charges made by the Opposition  Congress party.

Former Karnataka State Womens Commission Chairperson Manjula Manasa, who too addressed, urged the Government to fill all vacant posts in the Health Department on priority basis. Asking the Government to provide quality PPE and other safety kits to COVID-19 warriors in time, she alleged that lack of co-ordination between Corona Warriors was impeding  the  battle against COVID-19. She urged the Government to  resolve issues regarding COVID  care and take responsibility for quarantine of all  frontline Corona Warriors in accordance with the protocol.