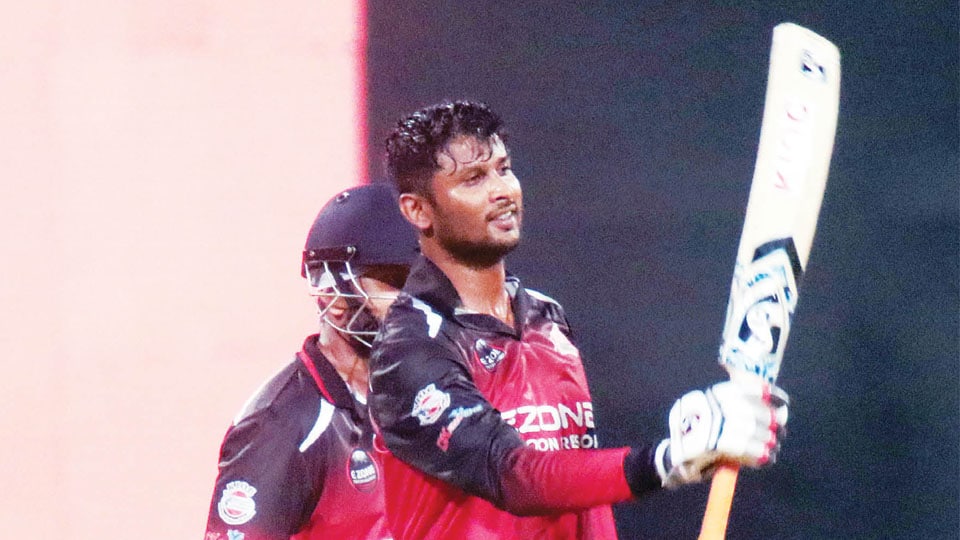 K. Gowtham scored the fastest century in Karnataka Premier League (KPL) history and picked up an astounding eight wickets to power Ballari Tuskers to a facile 70-run win over Shivamogga Lions in the battle of top two at the M. Chinnaswamy Stadium yesterday.

Tuskers finished on a season-high 203 for 3 in 17 overs in a rain-curtailed contest before bundling the Lions out for 133 all out in 16.3 overs. With this win, the Tuskers ended on top of the table with eight points from five games to guarantee themselves a spot for the playoffs of the KPL.

While making it to the playoffs with one game left in their league itinerary was in itself a feat, how the Tuskers got there was the stuff of legends.

Gowtham, pushed up the order to No.3, decimated Lions’ attack by smashing his hundred from 39 balls with six fours and 10 sixes. He went on to score the highest individual score in KPL with an unbeaten 134 from a mind-boggling 54 balls, including seven fours and 13 sixes. Mayank Agarwal was the man on top of both those tables with a high score of 119 and a century from 45 balls.

Gowtham also topped the most-sixes-in-an-innings chart, erasing Mohammad Taha’s mark of nine sixes in his 83 against Bijapur Bulls in 2017.

The Lions’ response was a good one with Akshay Ballal (41) and Pavan Deshpande (45) firing, but Gowtham spoilt that party too, picking up eight wickets, the most for a bowler in an innings, for a mere 15 runs in four overs. The previous KPL record was held by Nikin Jose, who picked up 6 for 11 runs in 2015.