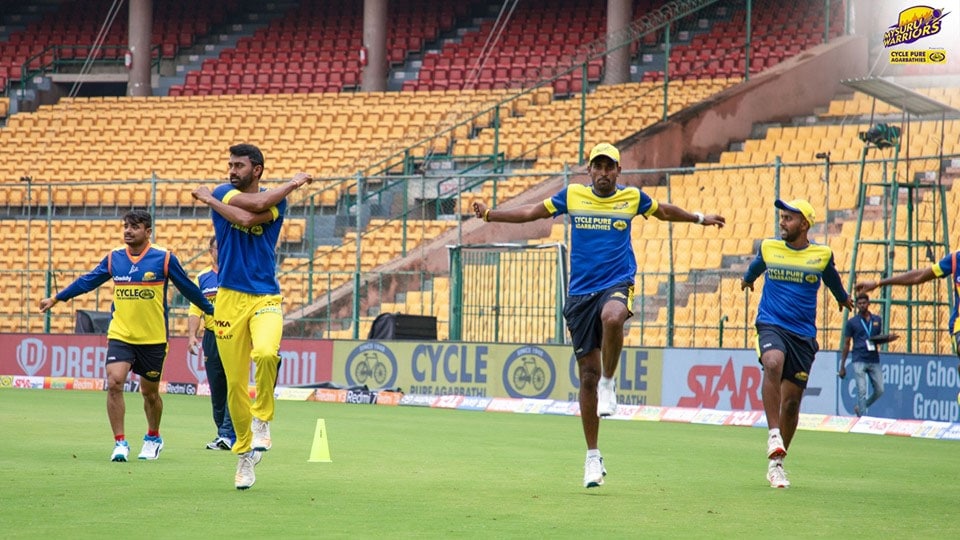 After successful seven editions, the Karnataka Premier League (KPL) – Season 8 is back with a bang. The first-leg of the tournament was held at M. Chinnaswamy Stadium in Bengaluru and the second and final leg of the tournament begins at SDNR Wadiyar Stadium from tomorrow (Aug.25). Having given close games in the first leg, the tournament promises to offer more in the second leg as well with the final scheduled to be held Aug.31.

Prior to the commencement of the tournament, the team had practice sessions at JSS-SJCE Cricket Ground under the guidance of Head Coach Rx Muralidhar and Assistant Coach Vijay Madyalkar. The team had previously used the services of former Australian Wicket-Keeper Brad Haddin, former Indian Team Mental Conditioning Coach Paddy Upton, former Indian Speedster Venkatesh Prasad and eminent personalities who have had successful cricket career. This year, it has however relied upon the Head Coach and the Assistant Coach to bring out good results.

After being led by Manish Pandey, Karun Nair (both who have represented the country) and J. Suchith, the baton is now handed over to experienced pro Amit Verma. Mysuru Warriors have a strong support team that has been working hard to keep the boys fit and rearing to go.

The team starts its campaign in Mysuru Leg against Hubli Tigers at SDNR Wadiyar Stadium in Mysuru on Aug.25 at 7 pm. Every fan of Mysuru Warriors is hoping that the team makes it to the qualifiers despite not having good results in the previous four matches of the season.

READ ALSO  11 players shortlisted for a spot in Mysuru Warriors

N.R. Group, the makers of Cycle Pure Agarbathies, is Mysuru’s well-known family business house. The company has not only involved itself in many charitable works but is also promoting many sporting activities and talented sportspersons from the city who have been representing the country at International level. Cycle Pure Agarbathies, which sponsors International Cricket Tournaments as well, owns Mysuru Warriors, one of the Karnataka Premier League franchises.

Star of Mysore caught up with Arjun Ranga, Managing Director, Cycle Pure Agarbathies and Co-owner of Mysuru Warriors, to talk about the team’s performance in this season. Excerpts…

Star of Mysore (SOM): It has not been a good start for Mysuru Warriors this season. What do you have to say?

Arjun Ranga: I don’t think we had a bad start. We had good starts in the first two matches as Mysuru Warriors was ahead of its opponents. Unfortunately, both the matches had to be called off because of heavy rainfall. Last match, was one of those days where an opponent player takes away the match single-handedly. And Bharat Chipli (Bijapur Bulls Captain) did just that. Scoring 50 runs in just 20 balls is something you don’t come across every day. I think our team is pretty intact and good. We still have a chance to make it to the playoffs if we do well in the next couple of matches.

SOM: Since there are a lot of youngsters coming into the team, do you think there is lack of experience when it comes to playing under the floodlights?

Arjun Ranga: I don’t think that was an issue. We had a lot of practice match stimulation and the youngster who have come in have played at different levels before. I don’t think the youngsters let the team down. In fact they have performed well. If you see, it is the experienced players who have not performed as expected. Players like Suchith, Amit Verma and Vyshak who have underperformed. There is no reason why they shouldn’t be performing. Getting out hit-wicket is something I have not seen in my life. Amit Verma got out hit wicket. It’s only our bad luck.

SOM: What do you think should be the team’s strategy in the next couple of matches to qualify for the playoffs?

Arjun Ranga: I think I must leave it to the captain and coaches. But, personally speaking, the senior players should come forward to take up the responsibility. Youngsters like Venkatesh has bowled well, Devaiah has done better than senior players. Even Vinay Sagar, who has made his debut this season, has also done a good job behind the wickets.

Unfortunately, senior players like Suchith, Amit and Vyshak, who are among the highest wicket takers in the KPL, do not have enough wickets this season. If you observe, they have failed to give us breakthrough when it mattered the most.

Even in the batting department, except for K.V. Siddharth, all the other senior players like Anirudha Joshi, Manjesh and Shoaib, who have played cricket at the highest level, have failed to deliver.

SOM: You have been promoting cricket and sponsoring many national and international tournaments? What does the game mean to you?

Arjun Ranga: Cricket in India personifies hope and togetherness. I believe cricket unites the nation and that’s the reason why I am supporting cricket.

SOM: N.R. Group as a whole has been promoting other sports as well, especially, talents coming out of Mysuru. What’s your say?

Arjun Ranga: We believe sports build characters and strong mental attitude, which is a need in Mysuru. So by supporting it, we are helping to build better citizens for the future.