Home » Feature Articles » Every player wants to be a Warrior: Amit Verma 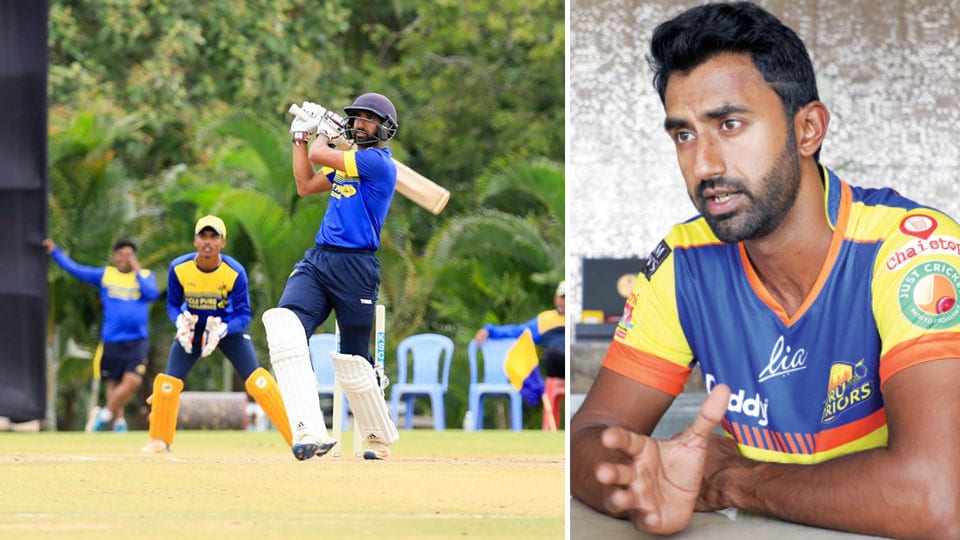 Every player wants to be a Warrior: Amit Verma

Amit Verma, a senior pro in the cricketing circuit, is a stylish left-hand batsmen and leg break bowler. Having made his first class debut for Karnataka against Delhi during 2007-08 Ranji Trophy, Amit has 13 first class centuries in his name with an average of 39.31 and has picked up 73 wickets from the 75 matches he has played so far. He has not only played for Karnataka in Ranji Trophy, but has also represented Kerala and Assam. Currently, he has been playing for Goa. He was part of the Mysuru Warriors team that won the KPL in 2014 and after a gap of three to four years, he was again picked up by the franchise in 2018 and was retained for this season as well. Amit has been leading the most celebrated franchise of the KPL this season — Mysuru Warriors. Star of Mysore spoke with the Captain himself to know more about the team and its game plan for the remaining matches of the tournament. Excerpts…

Star of Mysore (SOM): Firstly, how is to be playing for Mysuru Warriors?

Amit Verma: It is always a honour to be with Mysuru Warriors. I was with the team in 2014 and came back last year and continue to play in this season as well. It is a very special franchise to be a part of. Arjun Sir (Arjun Ranga) has been very helpful and very dedicated throughout all the seasons of KPL. Main part is to come to Mysuru two weeks before the tournament and getting to gel with the team and understand each other’s strength is one of the things which makes our franchise one of the best, in fact the best.

SOM: Mysuru Warriors has always been the best team on papers. But, when it comes to execution, results are not as expected?

Amit Verma: All the years, the team has been the same. But, I only feel that may be on a particular day we have not been playing up to the mark. Last year, we should have won the semi-final, but we didn’t play to win that game. The team is not lacking anything in particular, but we have not been doing well when it matters.

SOM: Talking about this season, the team has so far not done as expected. Where do you think the team has failed?

Amit Verma: For the rain-hit games we can’t do anything. But, in the last game against Bijapur Bulls, we should have got more runs. 140 runs was below par. Batting first, we were actually looking for 170 runs; thirty more would have made a huge difference. While chasing as well, we lost too many wickets in the power play. Though K.V. Siddharth and Aniruddha Joshi had a good partnership, we lost by 14 runs. We have got good batting depth, unfortunately we have been losing wickets too early. Top order batsmen need to take the responsibility and stay in the middle for at least 12-13 overs and then the lower order can take us through the innings to pile up a good competitive score or finish the game for us.

SOM: What can Mysureans expect from the team in the next couple of matches?

SOM: Being a local franchise, how do you think team will handle the pressure?

Amit Verma: Even if you play in Bengaluru, Hubballi or any other place, the pressure will remain the same. May be when you are playing in the home ground there is additional pressure as the expectation will be a little more than usual. It is good that there is a lot of support for the Mysuru team and we can win here and win the hearts of Mysureans, which will be good for the team.

SOM: Mysuru Warriors Management is known for its hospitality and infrastructure extended to the players. Anything you wish to tell about them?

Amit Verma: The management has been brilliant ever since they have entered the KPL. If you ask any player, everyone wants to be a part of Mysuru Warriors. The way players are treated by Mr. Arjun Ranga and his family is one thing that every member of the team enjoys. The players are not treated according to their seniority, achievements or names. Everyone is extended the same hospitality and treatment. Even if a player has not played a single match, he also feels the same as the senior players. This is very important to keep the team together and build confidence among the players. Arjun sir is always there to provide us with necessary infrastructure and other materials whenever they are required. What we should give back to the team is good cricket and playing to their expectation. We might win or lose, but going out there and playing like the ‘Warriors’ is what the team management expects from us and we need to deliver.

SOM: What next after KPL for Amit?

Amit Verma: As you know, this year I am playing for Goa. We might have our camp in Bengaluru as it has been raining continuously for the past couple of months. Goa would be playing the Vijay Hazare Trophy in Benagluru. The team is coming early next week and soon after the KPL ends, I would be joining the Goa Team.

SOM: Lastly, there is C.M. Gautham as Wicket-Keeper Bastmen and Dodda Ganesh as the Goa Team Coach and you as well from Karnataka. How does it feel?

Amit Verma: I know Gautham very well. We have played together for many years from the junior level. And Dodda Sir, we have known him for many years. He’s been very supportive and has been providing valuable inputs into my batting and bowling. It’s good that all three know each other very well which will be of great help for the entire season.

SOM: All the best.

Amit Verma: Thank You so much.