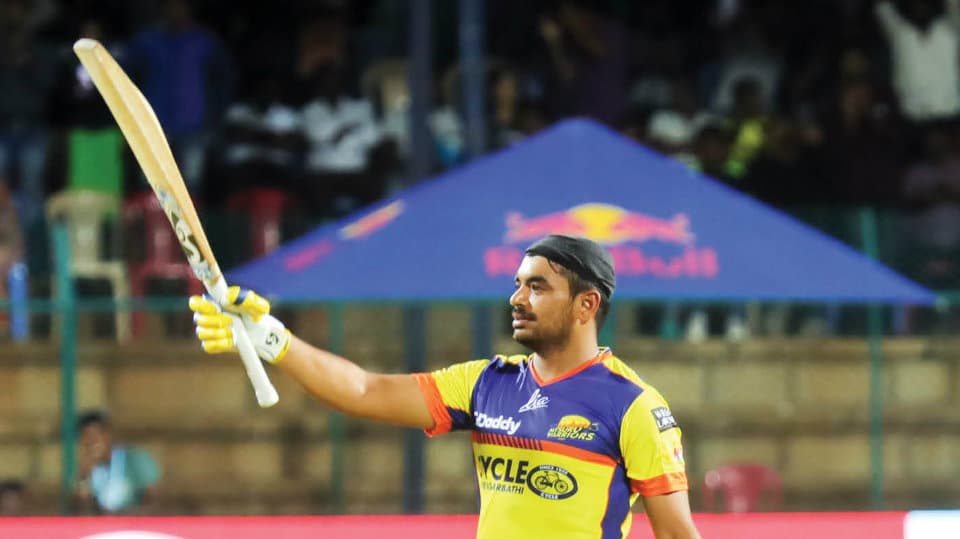 First ever in KPL match

They were eyeing for a comeback and what a comeback it was. Aniruddha Joshi cemented his position as a bona fide legend in Karnataka Premier League (KPL) with one of the finest knocks under pressure as Mysuru Warriors did the unthinkable in chasing 241 runs against Ballari Tuskers at the SDNR Wadiyar Stadium.

Joshi’s staggering 125 from 58 balls and an equally important nine-ball 30 from Manjesh Reddy helped the Warriors reach 241 for 7 in 20 overs in response to Tuskers’ 240 for 2 in the allotted quota of overs in the 19th match of the KPL.

Ballari Tuskers won the toss, elected to bat and scored the second-highest score in KPL history on the back of a 92 not out from skipper C.M. Gautam. The Mysuru Warriors stuttered to 34 for 3 before Joshi, the second-highest paid cricketer this season at Rs.7.1 lakh, took the game away from the Tuskers.

Later, when Joshi was dismissed by K. Gowtham in the 18th over with the Warriors needing 42 from 18 balls, a significant portion of the 3000-odd people in the stands were starting to leave the Stadium only to rush back when Manjesh brought the equation down to 20 runs in the final over.

M. Venkatesh’s four followed by his dismissal meant 16 runs were still required. The last four balls read: 2, 6, 2, 6 with Manjesh finishing the must hit 6 in the last ball. With this win, Warriors move to fourth on the table with six points from six games.

Tuskers, who had qualified for the playoffs before arriving in Mysuru, had only a few overs ago scored the second-highest total in KPL history, eclipsing Bengaluru Blasters’ 228 for 5 against Belagavi Panthers in 2018. The record for the highest score is still held by Hubli Tigers, who smashed 245 for 6 against the Rockstars in 2014.

While C.M. Gautam, the Tuskers’ skipper, was the top-scorer with an innovative 92 from 50 balls and Devdutt Padikkal (57 from 31 balls) was on fire, it was K. Gowtham’s 24-ball 48 that truly dented the Warriors.

After the 75-run second-wicket alliance between Gautam and Gowtham ended, the former added 109 runs with Padikkal to break the Warriors’ back.

With nothing to lose, the Warriors’ batsmen swung at it all. Three batsmen didn’t succeed. Joshi, however, was in a different zone, smashing 9 of the 17 total sixes in the innings. It must be noted that he was dropped on 90 by Abhishek Reddy.

Gowtham was once again special with his bowling, picking up 4 for 28 in his quota, but he could only watch in disbelief from midwicket as Manjesh sealed it with a six over long-on. To summarise, 481 runs were scored in 240 deliveries, and the crowd loved every moment of it.