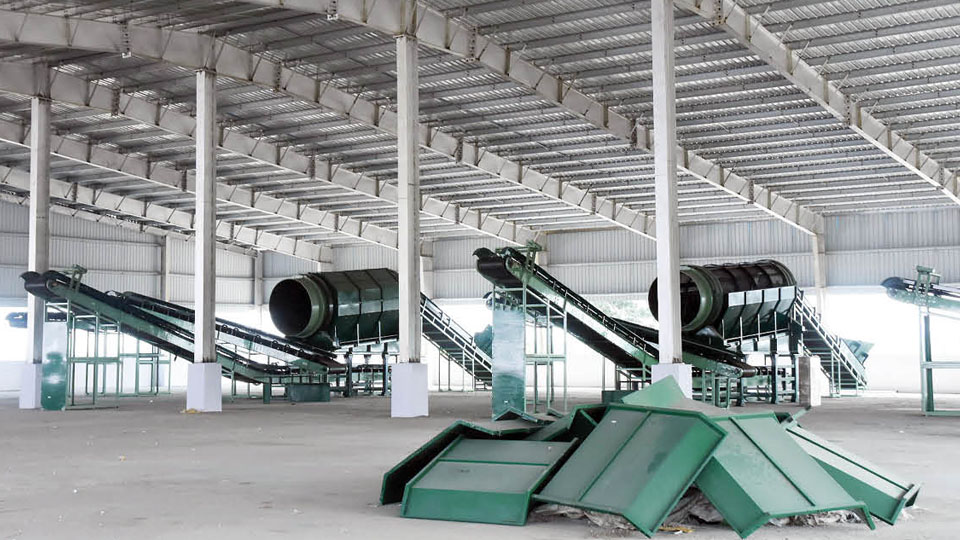 Kesare, Rayanakere waste plants to be reality in two months

Vidyaranyapuram Excel Plant to be shut; 7 lakh tonnes of legacy waste to be cleared

Mysore/Mysuru: The Solid Waste Management Unit (Excel Plant) at Sewage Farm premises in Vidyaranyapuram that emanates unbearable stench will be permanently closed and over 500 tonnes of waste generated in the city on a daily basis will be moved to the Solid Waste Treatment and Recycling Plants at Kesare and Rayanakere, the works of which are under speedy progress.

This comes after years of struggle and campaigns by thousands of residents living around Vidyaranyapuram, who had to invariably suffer because of the lack of will and resolve and funds to clear over 7 lakh tonnes of legacy waste rotting in the vicinity of their residential areas.

It is due to vast mounds of legacy waste that Mysuru has been missing out on the Cleanest City rank that the city bagged for the first time in 2014 and in 2015. In the years after that, Mysuru lagged behind in all the Swachh Bharat rankings and had to be satisfied with rankings that were below several cities.

Living in the surroundings of Excel Plant has become a horrible experience for residents with undesirable smell emanating out of the plant 24×7. Residents of Vidyaranyapuram, Kanakagiri, J.P. Nagar, Gundu Rao Nagar and Vishweshwaranagar have been demanding the relocation of the plant for years.

As the Rayanakere area is a lake land, a 4-ft basement has been constructed to prevent moisture and water seepage. Pillars will be laid by the sides and the groundwork for the pillars have been completed. Rayanakere is a Rs. 9.2 crore project and sheets will be laid on top of the pillars. Machines will be procured and electricity connection will be provided once the structure is ready. A new asphalted road has to be laid to reach Rayanakere from the H.D. Kote Road.

The Kesare Plant has a total capacity of clearing 300 tonnes of waste per day and the trial runs will begin from Dec. 15. “Over 150 tonnes will be cleared daily during the trial run and the capacity will be gradually increased to 200. If more waste is generated, the machines are capable of clearing another 100 metric tonnes scientifically after segregation,” Ramdas said.

Yesterday, MLA Ramdas, Mayor Shivakumar and Deputy Mayor Dr. Roopa visited the Kesare Plant and inspected the progress of works. They were accompanied by a team of MCC officials.

Waste collected from all the 65 Wards of the Mysuru City Corporation is collected at 18 places and segregation of wet waste and dry waste is being done. “New technology has been adopted at the waste treatment plants so that they do not emit stench. Work at Kesare Plant will be completed by the end of November and post that all the machines will be fixed to give power connectivity. The trial run will be completed by Dec. 15 and the waste can be brought here in phases,” Ramdas said.

The Kesare plant has been established at an area of 11.5 acres and in all, Rs. 22 crore has been spent on this. “The Vidyaranyapuram Solid Waste Management Plant has a capacity of handling 150 metric tonnes per day. Once the Kesare Plant begins operations, waste generated under MCC Zonal Offices 7 and 8 and two Wards each from Zonal Offices 5 and 9 in Narasimharaja Constituency will be taken to Kesare,” Ramdas added.

As over 200 metric tonnes of waste can be processed at Kesare, the pressure on Vidyaranyapuram Plant will reduce and the plant will be closed in stages. The 7 lakh tonnes of legacy waste will be cleared and tenders will be called for the same, Ramdas said.