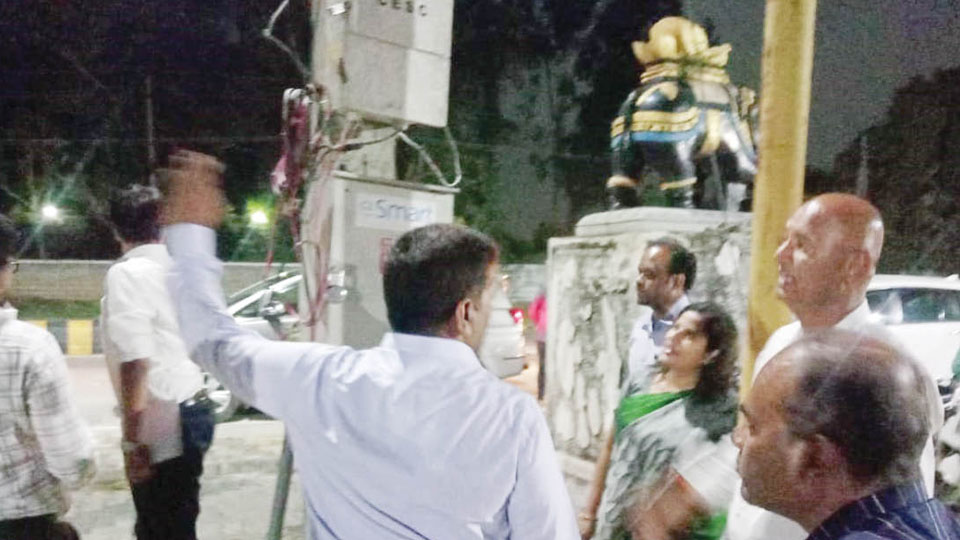 Mysore/Mysuru: Director of Municipal Administration N. Manjushree inspected the project to install LED bulbs at several areas of the city last night. She took a first-hand view of the brightness emitted by the energy-efficient Light Emitting Diode (LED) bulbs when compared to the earlier sodium vapour lamps.

First, the IAS Officer, accompanied by Mysuru City Corporation (MCC) Commissioner G. Lakshmikantha Reddy and other officers visited the poles opposite the Sri Lakshmivenkataramanaswamy Temple at Vontikoppal and collected information from the officers and also inspected the centralised control system.

The team later visited the area behind the Cheluvamba Park, the official residence of MCC Commissioner, LIC Circle at Bannimantap and inspected the quality of lighting. It is a seven-year Public Private Partnership (PPP) model project being implemented by New-Delhi based e-Smart firm.

In all, 74,691 LED bulbs have been installed across the city and this has resulted in savings of 70 percent electricity charges, Manjushree told reporters later.

“Earlier, we had conventional bulbs including tube lights, high-pressure sodium, mercury vapour and metal halide lights (halogen lamps) and now they have been replaced by LED bulbs and this has proved a money-saver project for the MCC,” Manjushree said.

The project will be implemented with a Centralised Control and Monitoring System (CCMS) with smart meters and Internet of Things (IoT) controllers in the next phase. This enables integration of all LED lamps and they can be operated remotely through wireless communication. “The CCMS control mechanism will be implemented as soon as we get approval from Chamundeshwari Electricity Supply Corporation (CESC),” she added.

The CCMS enables engineers to operate, control, monitor and rectify the integrated LEDs remotely via wireless communication. The system works on a node-and-hub model where each LED lamp is geo-tagged to a controller and a smart meter. The data collected is transmitted to the centralised hub or a control room.

“We have selected Kuvempunagar Subdivision as the pilot project for smart meters and smart switch points. If successful, the same facility will be  extended to the rest of the city,” Manjushree said.

A new control room has been established to maintain streetlights and the public can complain about the defunct lights and other issues bothering them in their area. Calls can be made to 1800-425-5925 between 8.30 am and 10.30 pm and the facility is functional since May 2022. Once the call is received, the personnel manning the telephone line will alert the jurisdictional staff to rectify the problem, she added.