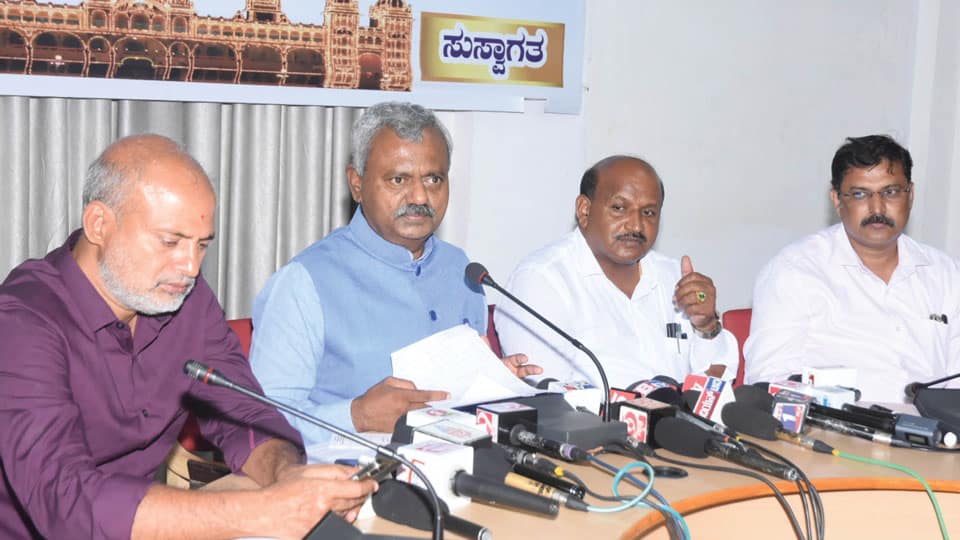 Mysore/Mysuru: District Minister S.T. Somashekar on Saturday said that with the Government announcing a Grand Dasara fete this year, the Mysuru District Administration and the Mysuru City Corporation (MCC) would be seeking funds from the State Government based  on the estimates prepared with regard to the conduct of various programmes as part of the festivities.

Addressing presspersons after the Dasara Executive Committee meeting at the Deputy Commissioner’s (DC) office here yesterday, Somashekar said that the Palace Board would fund Rs. 5 crore towards the expenditure for Palace events.

He pointed out that the District Administration and the MCC would submit estimates and seek funds accordingly based on the programmes planned  for the festivities.

Asserting that it is going to be a Grand Dasara this year after two years of low key celebrations on account of COVID-19, Somashekar said a widespread publicity campaign will be launched this year to showcase Mysuru Dasara  and attract visitors from across the world.

The Minister further said that the decision on the dignitary to be invited to inaugurate Dasara festivities atop Chamundi Hill will be taken by the Chief Minister.

Continuing, Somashekar said that Srirangapatna Dasara and Chamarajanagar Dasara celebrations would get a sum of Rs. 1 crore each. Three elephants have been sought for the Jamboo Savari at Srirangapatna as part of the celebrations, which the Executive Committee has agreed to.

The Minister released Dasara posters on the occasion.

Officials appointed for Dasara Sub-Committees: Deputy Commissioner Dr. Bagadi Gautham, who is also the Dasara Special Officer, has issued an order pertaining to the appointment of Deputy Special Officers, Working Presidents and Secretaries to 16 Sub-Committees of Mysuru Dasara Mahotsav – 2022.