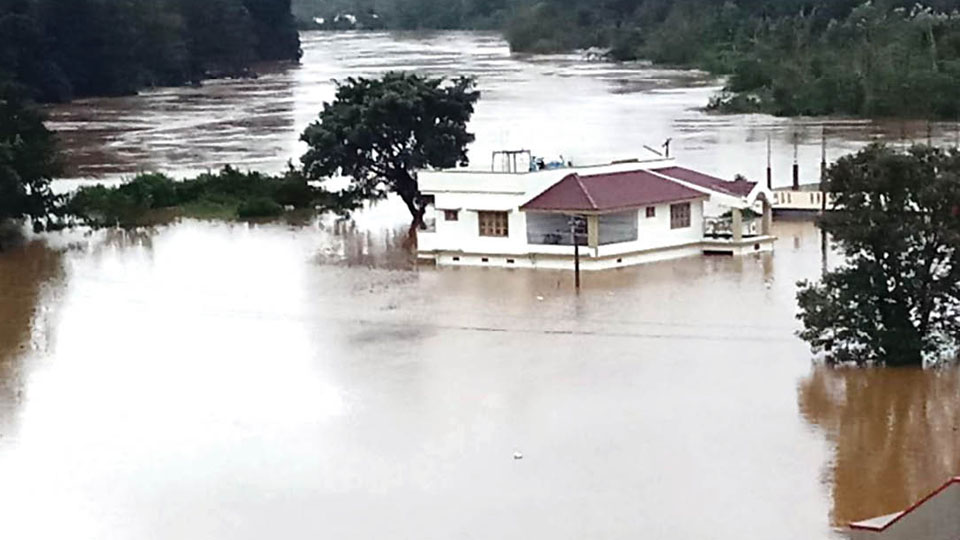 Madikeri/Kushalnagar: Rescue operations to evacuate stranded residents of Kodagu from flash floods, landslides, house collapse and overflowing rivers have been hampered due to inclement weather.

Though Army personnel and teams from National Disaster Relief Force have reached Kushalnagar from Bengaluru, they are unable to reach Madikeri Taluk as roads are blocked either by floods or landslides.

Almost all areas in Kushalnagar and Madikeri Taluks except the border areas at Koppa Gate are worst affected and many parts of the taluks resemble Kerala that has literally sunk due to rain and floods. Strong water currents flowing across the taluks are carrying the remains and debris of houses and buildings that have collapsed.

Thousands of people have been rendered homeless and they have been shifted to Ganji Kendras (gruel centres) by the District Administration. A video grab shows a child being airlifted by an Indian Air Force officer from atop a house in Madikeri. However, rescue operations have been hit due to inclement weather and flash floods.

The death toll that was three yesterday, has risen to five this morning with one child being washed away at Devastur village near Madikeri and one death reported from Jodupala where over 20 houses have been washed away. Roads have gone under water, putting residents at the mercy of inflatable boats and coracles to reach gruel centres. Over 160 families residing in Kudurebetta near Madikeri have walked to Madikeri town this morning as their houses have been destroyed by landslides.

An Army Battalion has been despatched from Bengaluru to Kodagu. The team was sent to rescue over 100 people who are stranded at Makkandur in Madikeri. The Madras Engineering Group teams from Bengaluru have also been despatched. Personnel from Karnataka State Reserve Police (KSRP) and Krishna Fire Fighting Force have reached Kodagu.

Makkandur has been waterlogged where over 100 people have taken shelter atop a hillock. A battalion of 60 soldiers belonging to one of the Dogra Regiments has been dispatched to carry out the rescue work. However, the rescuers have been stationed in Kushalnagar  as they cannot reach Madikeri.

As the Kodagu District Administration had sent out SOS message to Indian Air Force (IAF), the inclement weather conditions provided no chance for the choppers to land. 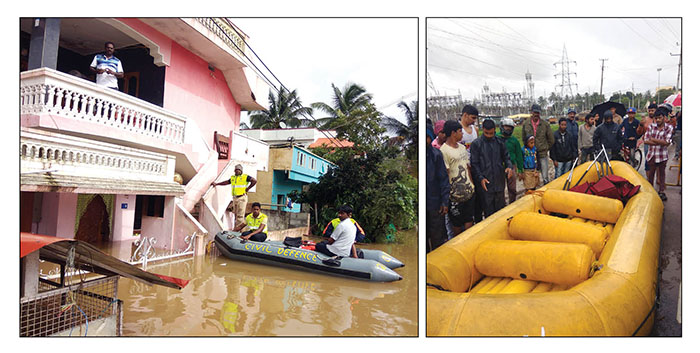 Boats being used to rescue trapped residents of Kushalnagar.

Despite this, choppers rescued many people who were stranded atop their houses in Madikeri. This morning’s reports say that two out of the three choppers have been diverted to Kerala as the damage is extensive there.

Families living atop Thantipaala village are also stuck and are waiting for help from the authorities. Personnel of the fire and emergency services managed to bring 20 people to safety. Another 200 people have been stranded Kandanakolli Haleri near Kandakal. Even the 30-member NDRF are finding it difficult to begin rescue operations due to bad weather and gushing waters.

Roads connecting Bhagamandala, Napoklu, Ayyangeri and other places have been completely inundated. Almost half of Kushalnagar has gone under water. The hi-tech market in Kushalnagar is flooded following release of over 80,000 cusecs of water from Harangi reservoir. Over 3-feet water is flowing on the Kushalnagar-Madikeri Road, submerging the bridge that is under threat of being washed away. 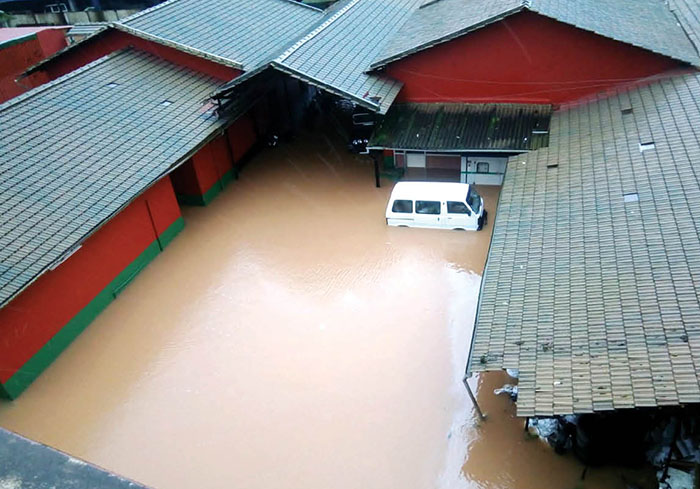 The Madikeri-Hassan highway has been completely submerged. Vehicles have been prohibited on the bridge across River Harangi at Koodige as cracks were identified there. Morarji Desai English Medium School at Koodige has been flooded. The Cauvery Nisargadhama has been closed. In Kushalnagar, over 500 houses have been marooned. Gruel centres have been opened at Kodava Samaja and Gowda Samaja in Kushalnagar. The bridge connecting Virajpet and Madikeri at Bethri is submerged. A scene from Makkandur where many residents have been trapped due to landslides.

Thousands of residents of Madapura, Mutlu, Hammiyala, Mukkodlu, Hattihole, Hachchinadu and Soorlabbi are being moved to gruel centres at Suntikoppa in buses and trucks. The scenic Kote Betta from where Kote Betta Waterfall flows is under danger of sliding down. The hilly terrain has been reduced to a mound of mud and rocks. 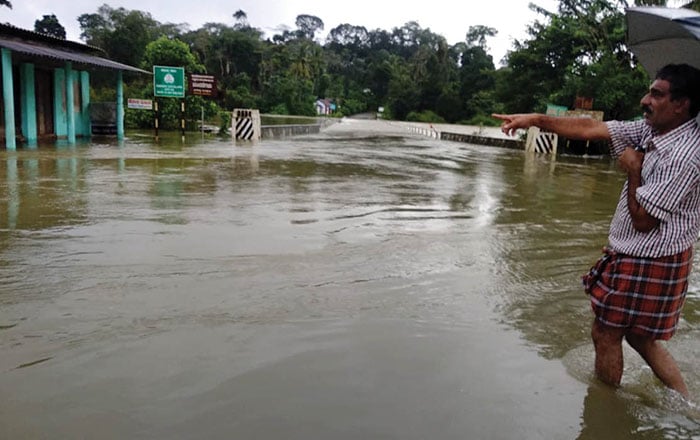 The submerged Bethri Bridge near Virajpet this morning.

The hanging bridge built across River Cauvery at Kanive has been washed away and villagers have no means to connect to the main land. 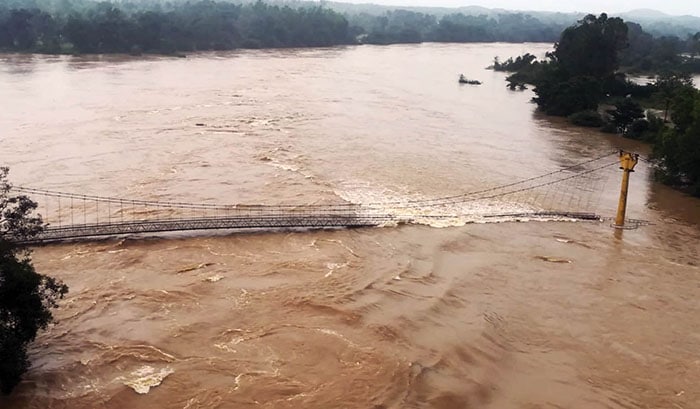 A view of the partially submerged hanging bridge across River Cauvery in Kanive near Kushalnagar yesterday. Today, this bridge has been washed away, cutting off the link between two sides.

Over 100 people have been stranded atop the Akashwani hillock in Madikeri where there are over 30 houses that face landslide threat. Over 200 cadets from National Cadet Corps (NCC) are carrying out relief and rescue operations.

Even volunteers from the Rashtriya Swayamsevak Sangh (RSS) have been pressed into service in Madikeri and Kushalnagar Taluks.