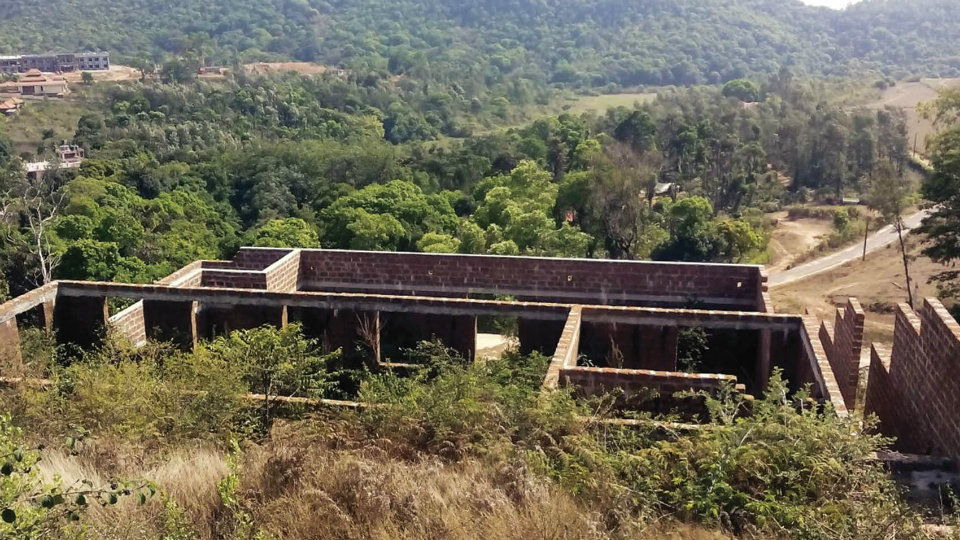 While a unique Kodava Cultural Centre on a sprawling 15-acre land at the sleepy and picturesque Balugodu, 6 km from Virajpet in Kodagu is attracting Kodava community members in hordes for marriages and other social, cultural and community gatherings, the ambitious Kodava Heritage Centre being built on a four-acre land at Karavale Badaga Village on the outskirts of Madikeri has been abandoned for reasons best known to the District Authorities.

Only 30 percent of the works are complete and despite money being sanctioned to the project, the work contractor has abandoned the project. The Kodava Heritage Centre was initiated by the Ministry of Tourism, Government of India in 2009-2010 and it sanctioned Rs. 1.45 crore. Later, the funds were increased to Rs. 2.53 crore. The foundation stone was laid on Sept. 21, 2011 and work began in full swing at Karavale Badaga in a place is located at a height and is visible from far and wide.

The project was conceptualised to showcase the traditional ‘Mundh Mane’ and ‘Ain Mane’ (ancestral home) as the concept of Ain Mane was fast disappearing as lands continue to be commercialised. Ain Mane is a place where all members belonging to a particular family lived in good olden days. However, now Ain Mane is a mere tradition as elders have gone, families have split and migrated in search of greener pastures.

Ain Mane has an important role in the socio-cultural traditions of Kodavas. Each Ain Mane belongs to an ‘okka’ (patrilineal clan) that is identified by a family name. There are over 1,000 Kodava families each with a distinct family name. Though most of the families do not have an Ain Mane of their own, a few families that have Ain Mane are protecting the tradition by organising social events.

These events include “meedhi,” “Guru Karona” (ancestral worship) where men, women and children of the family who are settled outside the district are brought together. Festivals such as “Puttari,” “Kail Poldu” and “Cauvery Changrandi” are also celebrated at Ain Mane.

It is 2019 now, and even after seven years, the construction has not been completed and the place now resembles a haunted house with weeds all over. Local people said that the contractor has not followed the standard construction procedures and has used sub-standard materials. The granite slabs which are supposed to last for years together, is peeling off and the walls have developed cracks.

On Mar. 2, 2018, Tourism Department Director had visited the Heritage Centre and had directed the PWD officials to  complete the works in four months. Despite this, nothing has moved and the place continues to lie in neglect.

The idea of Kodava Heritage Centre in Madikeri was mooted by senior IAS Officer (now retired) Rathi Vinay Jha and she is the force behind setting up the Centre. Rathi retired as the Secretary, Ministry of Tourism, Government of India and she hails from Kodagu. She initiated the Kodava Heritage Centre when she was the Tourism Secretary and was instrumental in sanctioning funds from the Union Government.

Rathi Vinay Jha is the sister of late Codanda G. Somiah who held high posts including Planning Commission Secretary, under the chairmanship of former PM Manmohan Singh, Home Secretary when Rajiv Gandhi was the Prime Minister, Central Vigilance Commissioner and finally the Comptroller and Auditor General of India (CAG).

‘Works will be handed over to Nirmithi Kendra’

The works to complete the abandoned Kodava Heritage  Centre will be handed over to Nirmithi Kendra or some other government construction agency, said Deputy Director of Tourism Department, Mysuru H.P. Janardhan under whose purview falls Kodagu tourism.

Speaking to Star of Mysore, Janardhan said that initially, the work was handed over to a Mysuru-based contractor. “As he has abandoned the project despite the release of funds, we have blacklisted the contractor. Once the Lok Sabha Election Model Code of Conduct period ends, we will hand over the works to Nirmithi Kendra or some other government construction agency. We will complete the project and make it a major tourist attraction,” he said.