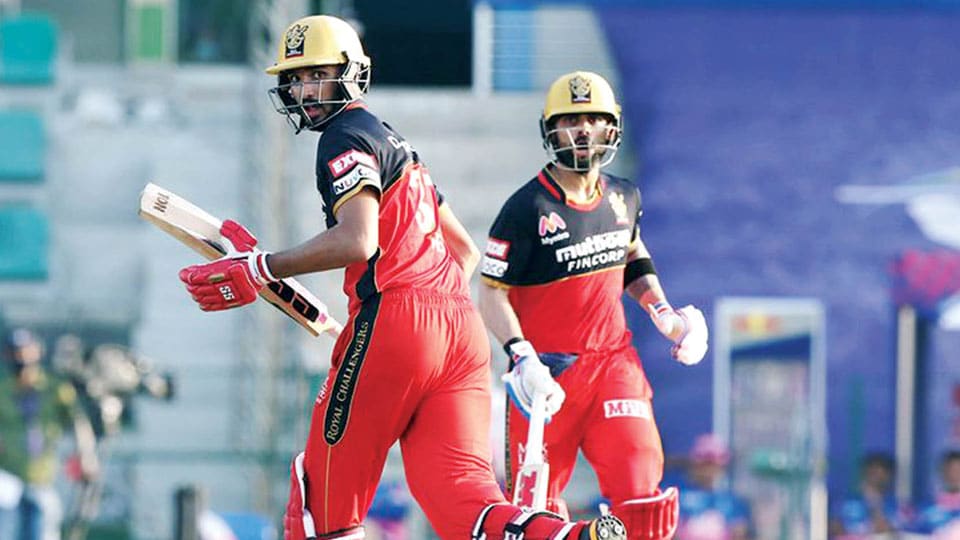 Chasing 155 to win, Padikkal lost his opening partner Aaron Finch early but that didn’t keep him from playing attacking shots. He combined with skipper Kohli and stitched together an 99-run stand for the second wicket. Padikkal also brought up third 50 of his IPL career in the process. Kohli played the second fiddle initially but opened up after gaining some confidence and notched up his first big score of IPL 2020, smashing 72 not out off 53 balls. AB de Villiers scored a boundary on the first ball of the final over to seal the game in RCB’s favour, with five ball to spare.

Batting first they started positively, with Jos Buttler taking the aggressive approach. RCB bowlers came back strongly to dismiss their three top-order players in quick succession and pushed them on the backfoot.

Kohli introduced Yuzvendra Chahal in the next over and he delivered immediately, removing dangerous Sanju Samson to further derail Rajasthan innings.

Mahipal Lomror, playing his first match of the season, made an immediate impact, scoring 47 runs. However, none of the batsman could lend him the support he needed and he eventually fell three short of his fifty, trying to up the ante.

DC posted a total of 228/4 after being sent into bat. Skipper Shreyas Iyer scored his fastest half-century ever in the tournament, remaining unbeaten on 88*. Opener Prithvi Shaw further smashed 66 runs off 41 deliveries. The duo enjoyed support from wicketkeeper-batsman Rishabh Pant who scored a 17-ball 38. Andre Russell was the pick of the bowlers, picking two wickets while conceding 29 runs. KKR were never really in the chase, losing quick wickets with the match seeming done and dusted at one stage.

However, a fine partnership between Eoin Morgan (44) and Rahul Tripathi (36), helped the team stage a comeback. The DC bowling attack led by pacer Anrich Nortje delivered the goods at this stage, with the dismissals of the duo sealing the win.