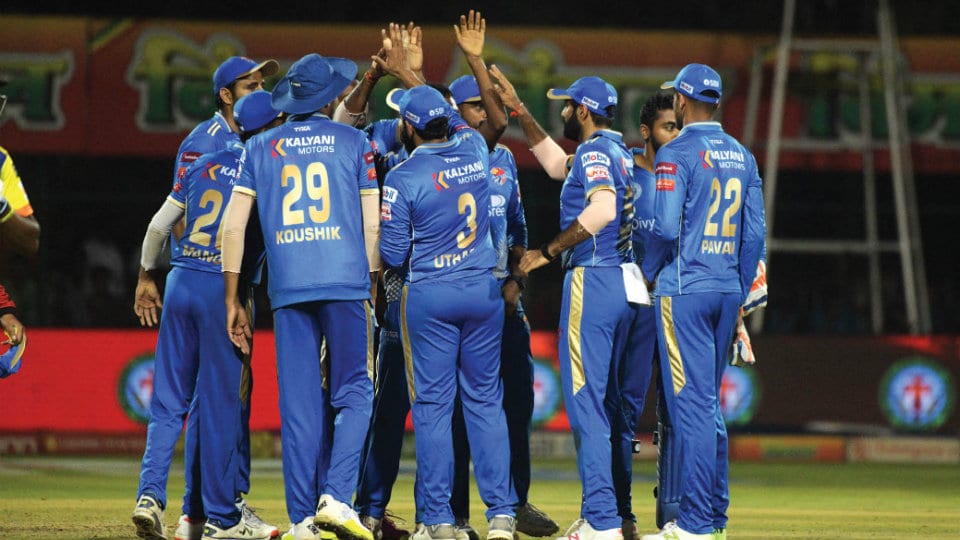 Bengaluru Blasters stormed into the finals of the Karnataka Premier League (KPL) – 2018 after they defeated Mysuru Warriors by 20 runs in the semi-final clash at SDNR Wadiyar Stadium in city yesterday.

Mysuru Warriors won the toss and put Bengaluru Blasters into bat. The Blasters got off to a decent start. The batsmen got good starts but were unable to convert them into a big score. With the wicket turning, life for batsmen became difficult with the introduction of spinners. Mysuru’s trump card was leg spinner Kushal Wadhwani (3 for 25) who was brought into this game in place of batsman Siddarth. He was well supported by skipper Suchith (2 for 12). The spinners strangled the batsmen and the batting order collapsed. The Blasters were at 92 for 6 within 16 overs. A late onslaught by Manoj Bhandage (34 off 15 balls) ensured that the Bengaluru Blasters reached a score of 138 for 9 in 20 overs. In reply, Mysuru Warriors got off to a positive start with Arjun Hoysala (52) taking command of the chase right from the word go. The spin trio of Arshdeep Singh Brar (1 for 5 in 2 overs), Anand Doddamani (2 for 16) and Shreyas Gopal (3 for 13 in 3 overs) caused a tumult in the Warriors camp. Birthday boy Shreyas Gopal, carried his prime form from the India B team where  he was the highest wicket taker in the recently concluded Quadrangular series. Apart from Arjun Hoysala, the other batsmen struggled to make any useful contribution. His dismissal sparked off a collapse and none of the other top order batsmen even made it to double figures. The Warriors finished their score at 118 for 9 in 20 overs.

Earlier, with Rain Gods showing no mercy for almost an hour the toss got delayed.  With the groundsmen and super soppers coming into the act, the ground was ready for the game at 7.55 pm. They had kept a one hour buffer time as there was no provision for a reserve day. Hence, no overs were lost.

The Bengaluru Blasters will now march into the finals undefeated throughout the season.