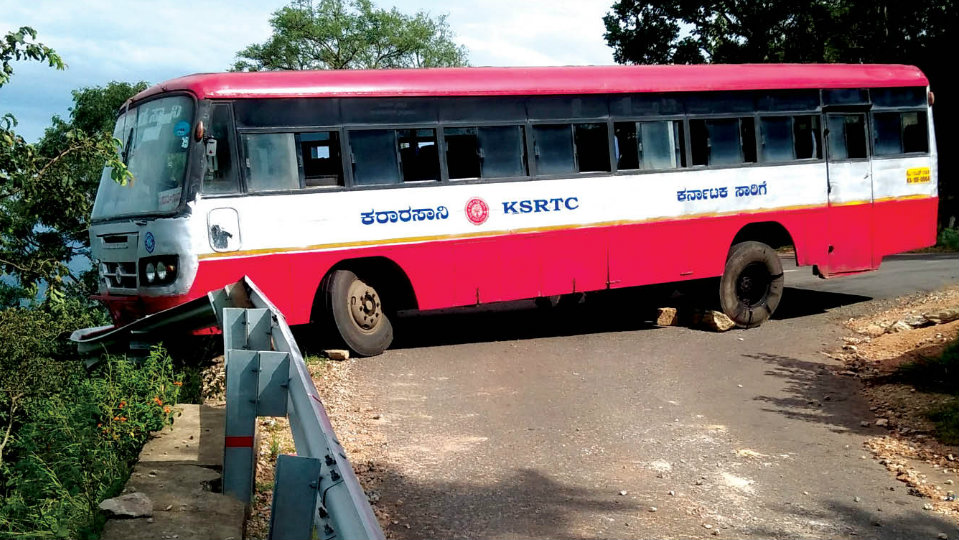 Gundlupet: The presence of mind of a KSRTC bus driver averted major mishap and saved lives of 58 passengers on board when the bus went out of control at Himavad Gopalaswamy Hill yesterday.

The KSRTC usually operates five mini buses to ferry passengers to the top of the hill. As it was Sunday, there were more passengers and the KSRTC had arranged a regular bus to ferry the passengers.

The KSRTC bus attached to Gundlupet Depot, left Bengaluru at 6 am to reach Gundlupet and left the town to the Hill at 10.30 am. After the passengers had the darshan of the God and offered puja, the bus with 58 passengers left for Gundlupet in the afternoon.

While coming down the hill, the driver lost control of the vehicle while negotiating a curve due to the damaged road. The driver then tried to steer the bus to the left during which the bus hit the iron barricade and was about to fall into a deep gorge when the driver using his presence of mind, applied the hand-brake following which the bus came to a standstill.

KSRTC Depot Manager M.G. Jayakumar, who reached the spot said that unscientifically laid roads, improper retaining walls & barricades and the height of the road raised by a foot, had made it difficult for regular buses to ply and added that henceforth only mini buses would operate to the Hill.

He further said that they would summon PWD officials today and ask them to take immediate steps to develop the road of the Hill.

At many sharp curves, only iron barricades have been installed instead of constructing retaining walls and due to heavy rains, the sides of the roads have been eroded making it difficult for vehicles to ply on the road resulting in frequent accidents, said some drivers, who added that this is the third accident on the hill since four months.

Due to internal conflicts between the PWD and the Forest Department, the road is not being developed which in turn is causing a lot of problems to the devotees visiting the temple atop the hill.

The PWD and the Forest Department should now keep their differences aside and take up works to develop the road and construct retaining walls at vantage points so that the devotees could go to the temple without risking their lives.