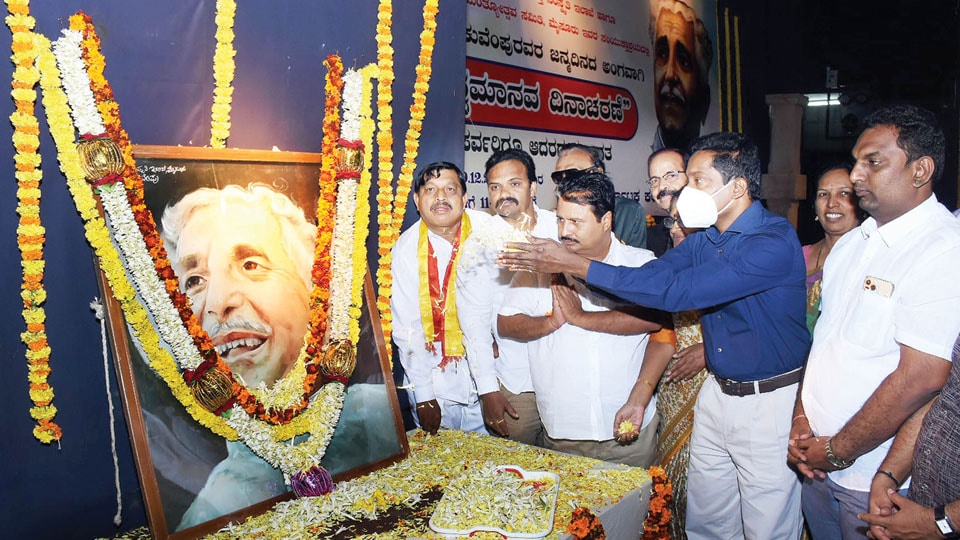 Mysore/Mysuru: Marking the birth anniversary of Poet Laureate Kuvempu, Vishwamanava Day was celebrated by various organisations at different venues across the city this morning.

Deputy Commissioner Dr. Bagadi Gautham inaugurated the official celebration at a programme jointly organised by the District Administration in association with Kannada & Culture Department and Kuvempu Jayantyotsava Samiti at Kalamandira on Hunsur Road. Speaking on the occasion, Dr. Gautham said that the credit for taking Kannada to national and international levels should go to Kuvempu.

Pointing out that Kuvempu is inarguably one of the greatest Kannada poets, he said that it is a matter of pride that Rashtrakavi Kuvempu belonged to Mysuru.

Noting that Kuvempu was conferred the title ‘Rashtrakavi’ for his literary works that have been globally acknowledged, the DC stressed on the need for the current generation to read books on great personalities and literary greats, he said that most of Kuvempu’s works focused on the true meaning of life and human values.

Bemoaning the tendency among the current crop of students to hook on to WhatsApp and Internet, Dr. Gautham said that it is a matter of concern that reading habit among the younger generation is witnessing a steady decline.

He asked the students to develop a practice of reading books and spending precious time in libraries so that they can not only enhance their knowledge but also learn about different facets of life.

Though it was an official celebration, many elected-representatives, including the MP and MLAs of the city, were conspicuous by their absence.

Former MP A.H. Vishwanath, who was the chief guest, took the Government to task for introducing Anti-Conversion Bill. Opposing the Bill, Vishwanath wanted all Seers and religious heads to speak up against the Bill, which was not at all necessary.

He lauded Kuvempu for spreading the message of ‘Vishwamanava’ in the true sense.