Home » News » Last-ditch efforts on to save Government 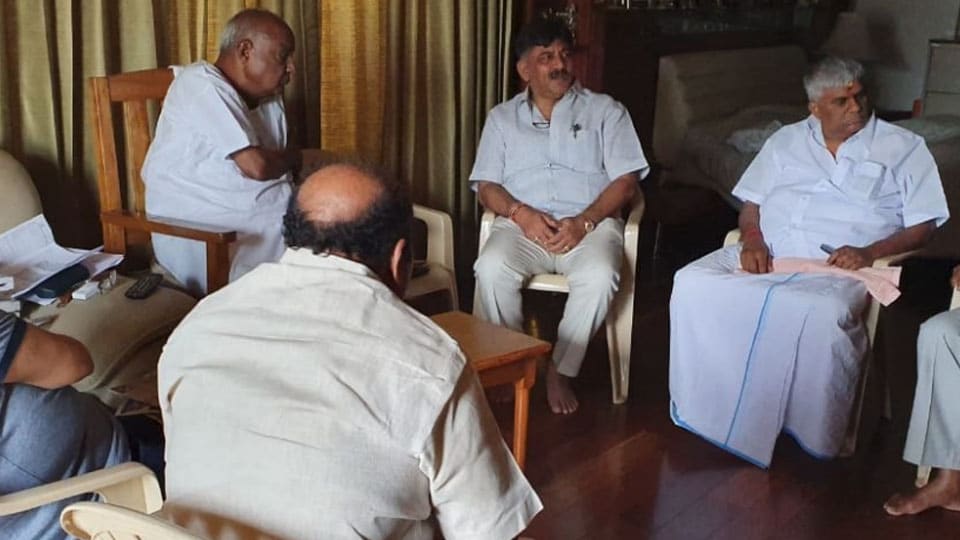 Last-ditch efforts on to save Government

Bengaluru: With the sword of uncertainty or call it Damocles’ Sword hanging over the 14-month old H.D. Kumaraswamy Government following the resignation of 13 MLAs, leaders of the JD(S) and the Congress on Sunday are making last-ditch efforts to save the coalition government.

Politics in Karnataka touched a new low with MLAs of the two-party governing combine — the Congress and the JD(S) — stooping to arm-twisting and blackmailing to enjoy positions of power.

Chief Minister H D Kumaraswamy, who is in transit from New York to Bengaluru, is understood to have been making efforts to reach out to the rebel MLAs and trying to convince them to reconsider their decision. The Chief Minister is expected to arrive in Bengaluru tonight at 8.30.

D.K. Shivakumar said JD(S) has called a meeting of its party leaders today evening and Congress will also do the same and sort out the issue. He said, “I’m confident things will cool down immediately. In interest of nation and both the parties we’ve to run the Government smoothly. I’m confident MLAs will come back.”

Reports said that Kumaraswamy spoke to senior Congress leaders ahead of political developments in the State. Both Congress and JD(S) leaders decide to seek resignations of 10 senior ministers to accommodate 10 disgruntled MLAs. Tourism Minister S.R. Mahesh and Minor Irrigation Minister C. S. Puttaraju are ready to resign from their posts to pave way for disgruntled MLAs, sources said.

Meanwhile, amid the crisis JD(S) sources said that the party top leaders were contemplating to ask Kumaraswamy to step down “before things further go out of hand”. “Before the party faces more humiliation, Deve Gowda is likely to ask Kumaraswamy to resign. The situation has become difficult now,” sources in the party said, and added that it could create a sympathy factor in his favour.

The Congress High Command is understood to have taken exception to senior leaders of the State unit, including Siddharamaiah, for turning a blind eye on rebellion brewing within the party that lead to the resignation of 10 of its MLAs. Ahmed Patel, former Political Secretary to Sonia Gandhi, is learnt to have spoken to Congress Legislature party leader Siddharamaiah over phone and sought explanation on the development in Karnataka. Patel asked Siddharamaiah why no steps were taken to prevent his own followers from tendering resignation.

In the meantime, BJP State President B.S. Yeddyurappa has reached Siddaganga Mutt in Tumakuru this morning and waved victory sign to supporters. Congress MLA Roshan Baig, who was suspended from the party, remained evasive on whether he will resign. He said the Congress has anyway suspended him which means they do not want him.