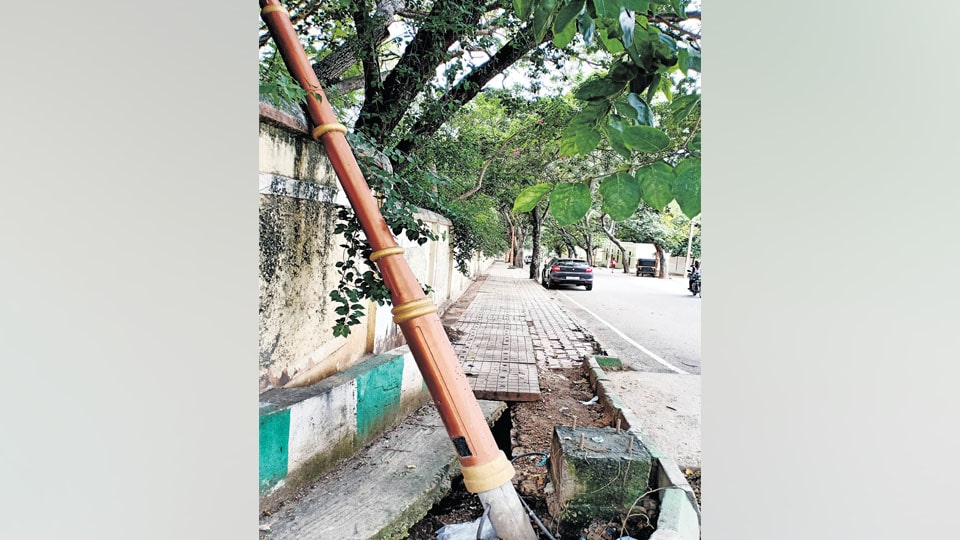 Leaning lamp-post of a model street in Tilaknagar

About 10 years ago residents of Tilaknagar made a request to convert Umar Khayam Road as one of the model streets since it was an important road that connected to the world famous Jumboo Savari route at Bamboo Bazaar junction on New Sayyaji Rao Road.

Respecting the citizens’ demand, after inspections, Umar Khayam Road was selected to be converted as a model street; a ‘file’ was opened. Nothing happened for a few years. With lots of patience and perseverance, the undersigned followed the ‘file’ and with the help of a few proactive officials, was able to get the footpaths laid with ornamental concrete blocks and after following up the ‘file’ again, was able to make the authorities lay fresh tar road.

Though there was a proposal to cut the decade-old trees for widening the footpath, residents were able to save them and also made the authorities provide pits around trees for rain water percolation.

During another two years, the footpath was dug up for laying various types of cables like electricity, water and mobile. The designed blocks were laid back/relaid and to enable erection of ornamental lamp-posts, necessary concrete platforms were also constructed. Even now the skeletons can be seen.

Then nothing happened; but after sometime, the footpath was dug up, some electricity cables were laid, another set of concrete platforms were constructed, some designed coloured lamp-posts were erected.

Even after many months, the lamp-posts have not been fitted with necessary ornamental electrical fittings for showcasing the street as a model street. Instead, one of the lamp-posts — right opposite to Ward No.25 office/ Canara Bank, Tilak Nagar Branch, has fallen and is dangerously leaning towards the compound wall of Deaf and Dumb School. I do not know how many more years the residents have to wait till the model street comes to life and ornamental lights glow.

I only wish before 2019 Dasara procession passes on New Sayyaji Rao Road, this ‘model street lamp post’ will be straightened and lights will glow.