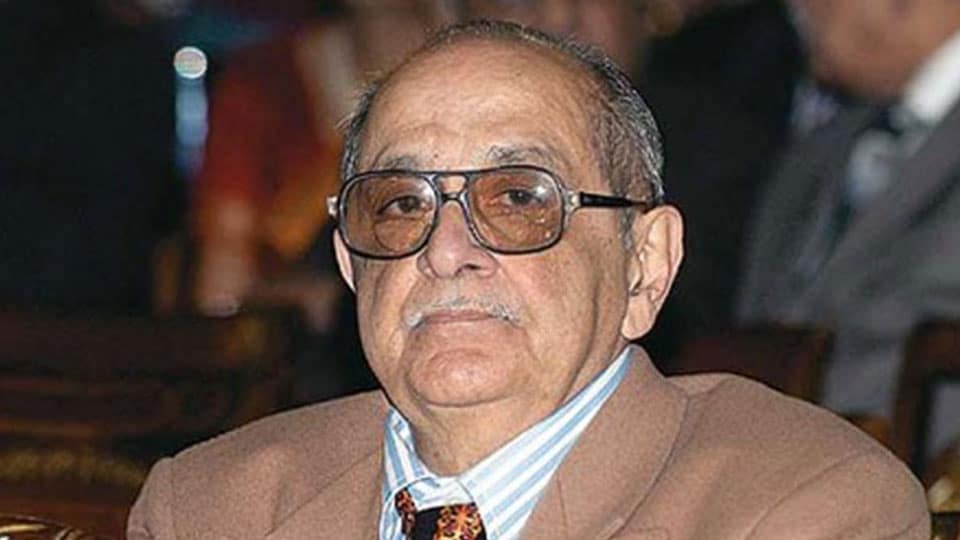 Eight years ago I walked into our local Sapna Book House and bought a book titled “Fali S. Nariman, Before Memory Fades…” It was an autobiography in the form of a collection of reminiscences.

Having studied law and served as an ‘adjournment’ lawyer, or as Nariman says of this period as “More watching than Pleading,” for a senior before making a course-correction in my career, I was interested to know about this celebrity lawyer who made it to the acme of this competitive profession. A refugee from Burma following Japanese occupation of Burma during the World War II, he was born on 10, January 1929 at the General Hospital in Rangoon, then British India. He is of Persian ancestry (Iran), his religion being Zoroastrian (Parsi).

Interestingly, our Congress politician and former Union Minister Jairam Ramesh who, after a visit to Azerbaijan, once part of Persia (Iran), wrote, with apparent desire to please Fali Nariman that when he was in Baku, capital of Azerbaijan, he saw the statue of Azerbaijan’s famous politician Nariman Narimanov and told his ‘guide’ that “one of India’s best known lawyers and one of India’s most lovable public personalities is also Nariman.”

Here, I recall the words of Brutus in the Shakespearean play “Julius Caesar” wherein Brutus says, “But when I tell him he hates flatterers, He says he does, being then most flattered.” But I must hasten to say here that neither Jairam Ramesh is Brutus nor Nariman the Caesar in this context. I was only thinking of shades of flattery in our life! Let it be.

However, the instant response from Fali Nariman shows him as a humble and noble person sans pretentions. He writes to Jairam thanking him for the information but says, “…But I assure you we were and are Parsi Zoroastrian (of Persian origin) hailing from India! But how sweet of you to have thought of me in such affectionate terms.”

Yes, the word “sweet.” The Oxford thesaurus had many synonyms for the word sweet. May be, sweet Fali Nariman chose the word as befitting a person like Jairam Ramesh, known to be highly courteous and nuanced. Let this pass for now.

The thin Chapter One of the book is where I discovered the ‘destiny’ of each man playing its role as the man moves along in his life’s journey. I found the very essence of the whole book in this Chapter. The rest of the book simply deals with pursuit of life in its various, multiple forms common to all human beings — as pursuing a profession, finding a spouse, begetting children, working hard to earn money, gain name, position and fame.

READ ALSO  With love from Donald Trump to India and Narendra Modi !

I guess in each individual’s life, anywhere in the world, there appears to be many turning points. Each turning point will shape the future of the man. Fali Nariman says, “Our arrival in New Delhi marked the first turning point in my life — landing as a refugee from Burma, uprooted from home and hearth.”

According to Fali Nariman, the next turning point in his life was when he joined the Bombay Bar in November 1950.

He then talks about how ‘Some unknown person’ gives you a helping hand. This is what he says, “Life is full of surprises. Whether you do or do not believe in destiny or in Providence or in God, be sure that — out of the blue — some stranger, some unknown person, at one time or the other, will reach out and give you a helping hand as you journey along on the rough roads of life. I had no ‘Godfathers’ in Bombay. But God helped.”

After working as a trainee — apprentice in a law firm — he was very lucky (and this could also be a third turning point) to secure entry into one of the most prestigious ‘Chambers’ in Bombay — the Chambers of Sir Jamshedji Kanga. He never looked back thereafter.

In short, the Victorian Model or Ideal of Justice (with the lady standing blindfolded), the Indian Model or Ideal of Justice where the lady is not blindfolded and in the third Model the architect has carved, at the base of the High Court building tower, the face and front paws of a monkey! Is it the Architect’s Model of Justice!? Well, does he suggest that if Law, as said in jest, is an ass, Justice is a monkey? I do not know. Fali Nariman was silent.

Rightly, Nariman emphasises the importance of the Senior Advocate (Lawyer’s Chamber) in whose office a junior or apprentice lawyer begins his career. According to Nariman, when one has to name the great and famous lawyers, it is like also mentioning the “Chamber.” He says, it reminded him that “When you mention a famous race horse, they ask you, ‘from which stable?’ The stable is important. It establishes the ancestry and the breed.”

Likewise, “When you name a (great and famous) lawyer who has done well, people ask: From which Chamber?” The Chamber is important. Nariman was lucky to start his career from Kanga’s Chambers.

Nariman recalls a story, told by Kanga, about founding of the famous Willingdon Sports Club in Bombay. Lord Willingdon, Governor of Bombay (1913-1918), had invited (an Indian) Sir Mahadeva Bhaskar Chaubal, Member of the Viceroy’s Executive Council, who was visiting Bombay, to a lunch at the famous exclusive Club for whites only, known as Byculla Club. The lunch was arranged but when the chief guest Sir Bhaskar Chaubal arrived at the Byculla Club he was refused admission. ‘No Indians please,’ said the Club Management to him at the door. The story does not say what the Governor Lord Willingdon did except feeling ‘furious’ when the Club overruled the Governor’s guest-list. The story does not also say how and where the Indian-origin chief guest was served luncheon.

The story goes that Lord Willingdon then decided to establish such a Club where there are no distinction and a man of sufficient social position can be admitted. Interestingly, Sir M.B. Chaubal was one of its Founder-Members!

Politics keeps changing, society keeps evolving so also individual man’s life guided by providence and destiny. There are many gems Fali Nariman has adorned the book with that relate to humanity.

He writes about the manner successful people should display humane quality while dealing with fellow employees, specially. He writes about one J.M. Thakore, nephew of the legendary lawyer Motilal Setalvad. When Gujarat State was formed, he was appointed the State’s Advocate General.

Nariman writes a particularly touching and revealing quality of J.M. Thakore recalling what he told Nariman many years ago. Here it is: That J.M. Thakore firmly believed that a successful lawyer should not disturb the even order of things. For instance, you don’t dispense with members of your staff however old and inefficient they have become. If you have made progress in life, it is because of the good fortune not of yourself alone, but of persons around you as well, including those who are dependent on you.

After recounting another similar incident related to Sir Dinshah Mulla and his wife, Nariman with great humility, humbling himself for a great lawyer that he is, writes: “Great lawyers instinctively know that luck or providence — call it what you will — plays such a major role in their lives and in their success, that they never push it too hard!”

Pardon me, I may sound immodest when I say that in all my life as a small-time entrepreneur I have followed the ideal enunciated by J.M. Thakore and another Sir Dinshah Mulla’s wife mentioned above.