Home » Columns » Abracadabra By K. B. Ganapathy » Now is the time for voters to demand their ‘pound of flesh’ 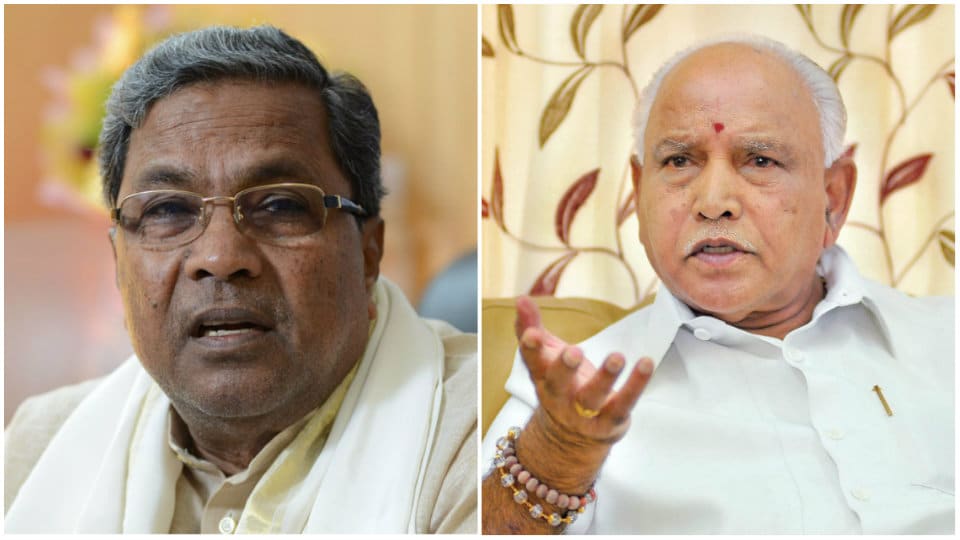 Come elections to Assembly or the Parliament, there is heat in the political camps. Otherwise, there is bonhomie among all political parties, though covertly, so that they can individually reap the benefit of our liberal democracy steeped in corruption.

While Siddharamaiah’s ruling Congress may have the disadvantage of incumbency, the master-politician Siddharamaiah of great Machiavellian ideas coupled with our own Chanakya’s, he has found ways and means of nullifying the adverse effects of incumbency.

The very fact that Siddharamaiah was able to complete the statutory five-year term of office without any strong opposition from his own party Legislators or from the High Command is proof how strong a leader he is. What D. Devaraja Urs was in his days under a strong Indira Gandhi, Siddharamaiah is in these days under a weak Rahul Gandhi.

He has actually launched a multiple people-friendly, rather poor people-friendly, schemes of so many Bhagyas (blessings) knowing that among the voters the number of poor are more compared to the rich and upper class. And it is the poor who go to the polling booths in large numbers. Poor are also those who could be easily (you know how !) brought to the polling booths.

The latest one among these Bhagyas is the Indira Canteens, an imitation of former Tamil Nadu Chief Minister J. Jayalalithaa’s Amma Canteens. No matter these canteens function as effectively and purposefully as Amma Canteens or not, the required publicity of being a Annadatha or a Good Samaritan of the BPL card holding voters is achieved.

It is a fact that, as Siddharamaiah himself says in his political speech, most of the allegations made against him, his colleagues and the Government itself by the opposition BJP and JD(S) have been found without proof or evidence. No wonder, Siddharamaiah jokes about these allegations of corruption and maladministration saying that BJP President B.S. Yeddyurappa keeps saying he has evidence and records of corruption against Siddharamaiah and his government but never released those records nor did he file cases against him.

He likens these charges to a snake-charmer holding his snake basket, playing pungi, the distinctive wind music pipe, to rouse the snake out of the basket. However the snake charmer never opens the basket because there is no snake inside! And then, in the last nearly five years, Yeddyurappa was keeping quiet and why only now this kind of allegations? Why not take them to the logical end? This surely leaves a question mark in the minds of the voters.

Now compare this with the NDA at the Centre. Indeed, the Congress and the Gandhi family are made to feel the heat of the law and some of their ‘lobby’ and ‘dirty’ politics are exposed for all to see — take the issue of ‘intolerance’ and the ‘intellectuals’ returning the awards, the JNU incident of challenging the Indian State and the latest revolt by four Supreme Court Judges against the Chief Justice of India Justice Dipak Misra. I am sure 80% of the people don’t approve of this kind of attack on NDA Government and these challenges are well-exposed as vicious.

In Mysuru a couple of days back former CM Yeddyurappa said CM Siddharamaiah is facing 67 cases but has managed to escape. If the opposition BJP is strong and committed to protect the State exchequer, it should have worked hard to expose all these 67 cases.

Yeddyurappa says that Siddharamaiah has been dividing the people in the name of caste, community and religion. Yes, but that’s how dirty politics is played in any democracy. If Police Department is under the control of former Police Officer Kempaiah, so be it. After all, he is appointed as per law and it is Siddharamaiah’s prerogative.

I guess, now B.S. Yeddyurappa must tell the people what the NDA is doing for the poor at the Centre and what he would do when and if he comes to power. It is just right for him to remind his voters that Prime Minister Narendra Modi, President Ram Nath Kovind and Vice-President M. Venkaiah Naidu are from backward communities, an assurance that the NDA and the BJP are concerned about the Dalits and the backward people.

Reminding the Dalits about how and who defeated Dr. B.R. Ambedkar in two Parliamentary elections and who neglected the residence of Dr. Ambedkar in London and in Maharashtra and how Narendra Modi is developing these houses as national monuments. Of course, it is necessary because in the past an impression was created that much was done for Dalits by the UPA and the Congress. But the truth is much less was done to the Dalits.

In Karnataka, voters of different sections are now demanding from political parties what they want from the Government when the party comes to power.

For example, yielding to a demand, Yeddyurappa has promised Parivara and Talawara communities, which come under backward classes, to include them into the Scheduled Caste list. I guess the Kodavas of Kodagu, who have been agitating for recognition of their language and a tribal status must similarly get a promise from Yeddyurappa and Siddharamaiah if they want support of Kodavas in the ensuing elections.

To jest, what happens when both Siddharamaiah and Yeddyurappa make the same promise? Whom will Kodavas choose? That’s the beauty of democracy.