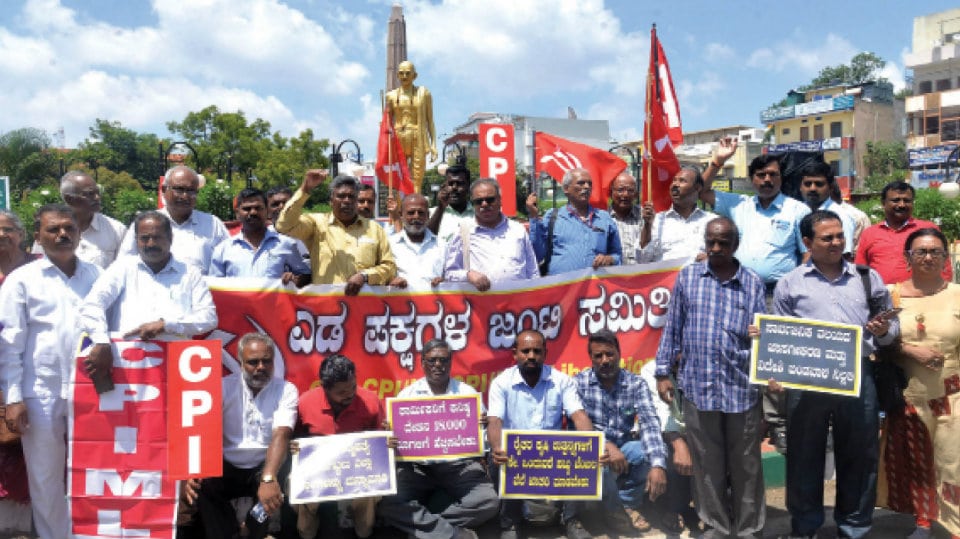 Mysuru:  Members of Joint Committee of Left Parties staged a protest at Gandhi Square here yesterday alleging that the unscientific decisions of the Union Government had driven the country to a state of economic crisis.

The members alleged that Prime Minister Narendra Modi had failed to implement pro-people schemes over the last five-and-a-half-years. They alleged that Modi’s unilateral, unscientific and irrational stand had literally driven the middle and poor class to abject poverty.

Modi has created an imaginary world of development and hyping on Pulwama and Balakot strikes but has miserably failed to protect the economy of the country which has dropped to an abysmally low level never seen post-Independence, they alleged.

Continuing, the members pointed out that the first quarter Gross Domestic Product (GDP) rate was 5%, the lowest in the last 6 years with just 2% growth in agricultural sector and a meagre 0.6% in manufacturing sector.

Many sectors like automobile, mining, steel, textile and jewellery have come to a standstill with 10 lakh people losing jobs and Union Government just staying put with sheer nonchalance, the protestors observed.

Though the State has been devastated by the recent floods, the Centre has provided a meagre Rs. 1,200 crore aid and washed its hands. The Chief Minister remains helpless claiming that the State coffers are empty, said the protestors who sought immediate relief for flood victims, a minimum wage of Rs. 18,000 for workers, a good support price for agricultural produce and an end to privatisation and foreign investment in public sector.