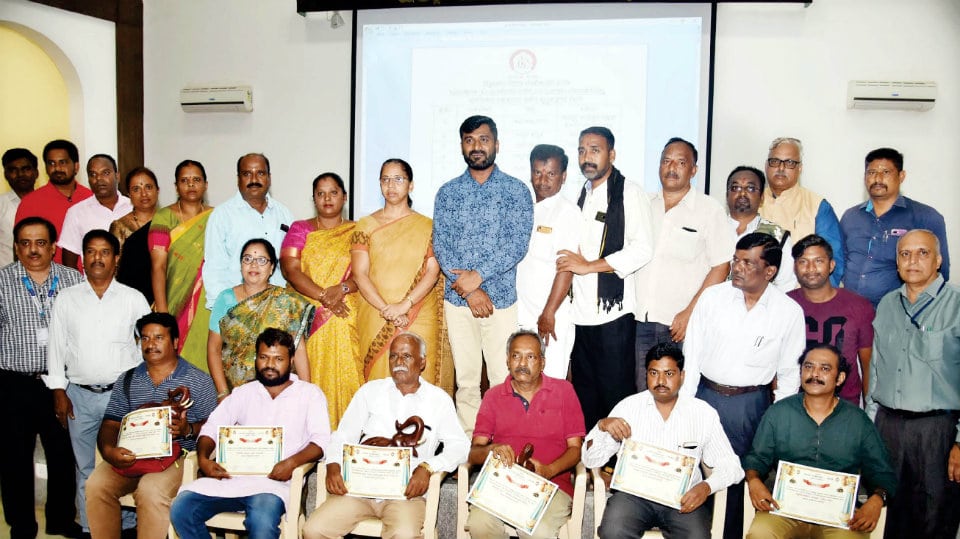 Mysuru: Outstanding tableaux, which participated during this year’s Mysuru Dasara, received prizes and mementos during the prize distribution ceremony held at Zilla Panchayat Auditorium in the city yesterday.

The Chamarajanagar tableau, a huge tiger with the slogan ‘Samrudhi Sampathina Naduve Huliya Santrupta Thana’ won the first prize. Kadamba-Banavasi tableau of Uttara Kannada and ‘Walking God’ tableau on late Dr. Sri Shivakumara Swamiji of Siddaganga Mutt of Tumakuru bagged the second and third places respectively. Each of these three winners received Rs. 30,000 cash along with elephant model as memento and certificate.

Speaking after distributing prizes to winners, Mysuru ZP CEO K. Jyothi said “all the tableaux which participated during this year’s Dasara were very impressive and efficiently depicted various government schemes, contribution of well-known personalities along with message to the society. We must thank District Minister V. Somanna on this occasion.”

“All Zilla Panchayats have done a great job in selecting talented artists in a very short time-frame. Also, I would like to thank media for their excellent coverage and support,” she added. President of Tableaux Sub-Committee S. Murali, Vice-President Arunkumar Gowda, Lakshmidevi, Nandakumar, Padmashekhar Pandey, Lingaraju, Saraswati and other Committee Members were present.