Home » News » Leopards on the prowl 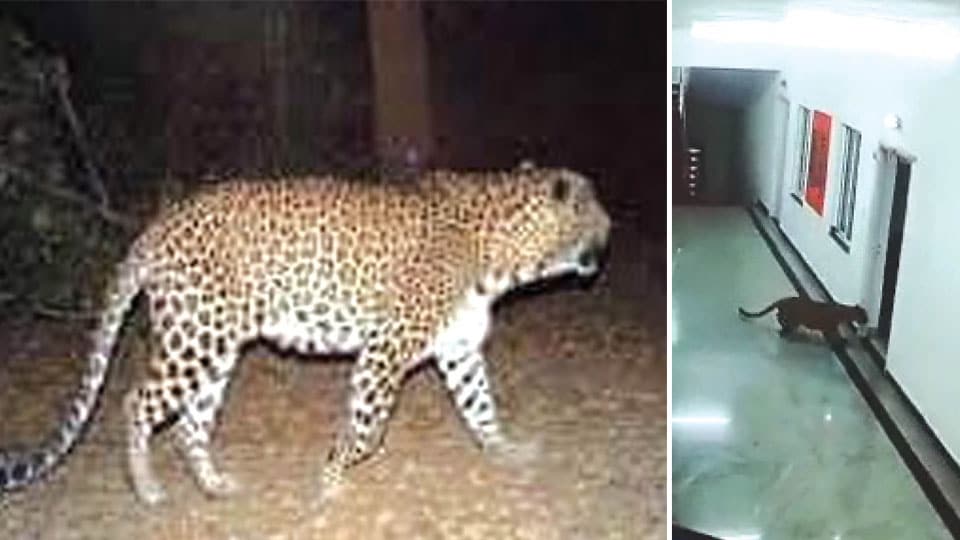 Leopards on the prowl

Chamarajanagar/Mysuru: Frequent sighting of leopards, has shocked the residents of Gundlupet town, while another leopard entered the quarters of the staff of Chamarajanagar Government Medical College yesterday night.

In Mysuru too, a leopard that entered the premises of Advaith JCB Company at Hebbal on October last, has taken away a sleeping dog. All the above incidents have been captured on CCTV cameras.

Gundlupet: The leopard, which was spotted at Doddakere surroundings by cowherds since a few days, was spotted in broad daylight at the Eidgah Maidan in the town. The leopard wandering at Eidgah Maidan on Monday night has been captured on CCTV camera of a nearby hotel and the footage has gone viral on the social media.

A few persons, who spotted the leopard on Tuesday morning too, had informed the same to others and the residents of the town have stopped moving near Kodahalli Circle and Eidgah Maidan. They have demanded the Forest Department authorities to take steps to capture the leopard.

Range Forest Officer (RFO) Dr. Lokesh said that the Department staff have inspected the place and added that a cage would be placed to trap the leopard soon.

Chamarajanagar: A CCTV camera installed at the quarters of Chamarajanagar Government Medical College staff quarters, adjacent to Yedabetta in the outskirts of the city, has last night captured a leopard entering the quarters and trying to flee outside.

The staff of the college too have sighted the leopard inside the quarters and the video of it is doing rounds in the social media.

Meanwhile, Medical College Dean Dr. Sanjeev confirmed the presence of the leopard in the quarters besides confirming the CCTV footage as that of the college’s staff quarters.

He further said that as the college is located next to Yedabetta, leopards are often spotted in the college campus.

In Mysuru too, CCTV camera installed in the premises of Advaith JCB Company at Hebbal, has captured a leopard stealthily entering the premises and taking away a dog sleeping on the steps of the office on Oct. 9 last year.

The Manager of the company said that about 60 employees work in shifts every day, who are now afraid to move around the company. He further said that there are many companies in the surrounding where hundreds of people work daily and added that a complaint in this regard has been given to the Forest Department authorities.