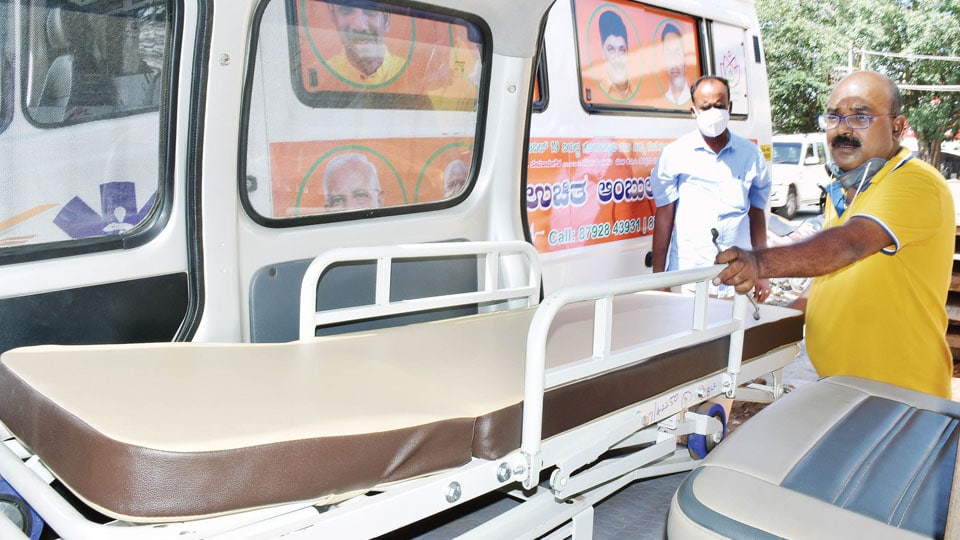 Mysore/Mysuru: With the increasing demand for hospital beds as well as ambulances amid the massive surge in COVID-19 cases, there are many enterprising businessmen who have taken up the task of converting tourist and other passenger vehicles into ambulances. And Mysuru city has become a hub of ambulance-making for districts like Mysuru, Mandya, Hassan, Chamarajanagar and Kodagu.

Treated specially by the Government agencies in the districts as essential service, the ambulance-making business has given a new lease of life for tourism vehicles that have been sitting idle as the entire tourism sector has been shut and there is no chance of revival in the next couple of months.

While there are many vehicle-converters who are making minimum changes to the tourist vehicles after removing the seats to convert the vehicle as hearse vans, some workers are giving the vehicle a total makeover, transforming the tourist vehicles into full-fledged ambulances complete with foldable beds, mini-ventilators, and oxygen supply connections and with sirens and siren lamps.

Though the Health Department has been making efforts to provide ambulances and other vehicles and infrastructure to cater to the people affected by the pandemic, at times it gets stuck as the demand is more when the infected cases pile up requiring immediate attention and transportation to hospitals with oxygen necessity.

Also with the establishment of COVID Care Centres (CCC), critically ill patients have to be transported from the CCCs to the hospitals. The Government 108 ambulance service is not used for COVID purposes due to the contagious nature and stigma attached to the disease and even non-COVID patients and the pregnant had to be brought to hospitals from villages. So naturally there was a dearth of ambulances.

“Moved by the plight of several people who had to wait in uncertainty for the ambulances to getting admitted, I decided to convert vehicles into ambulances. No other vehicles are being used as ambulances because of the fear of this deadly virus. As there was a shortage of ambulances, I decided to convert tourist vehicles,” N. Ram Prasad of Ultra Radiums told Star of Mysore. He has an outlet in Vidyaranyapuram in city that has a full-fledged fabrication workshop.

Permission from the Mysuru District Administration and the administrations of other districts has been obtained considering that it is a lockdown. Earlier, the demand was minimum with only a couple of political parties seeking to convert Tempo Travellers into ambulances. As the demand for vehicles grew, Ram Prasad got orders from other districts and in the last one month, he has converted more than 30 vehicles into ambulances.

He has a team comprising Naga, Ramesh, Raghu and Ajay as welders, Kalim as electrician and Manjunath as the person who does the finer details in fabrication and stickering. “We get the materials through online stores and all the materials are treated as essential service and even the delivery is allowed. I was doing the radium sticker business earlier but as it was an emergency, I chipped in to this conversion,” he said.

A majority of the vehicles converted till now (over 20) are Tempo Travellers that were used as tourist carriers. Even Innova and Winger have been transformed. “The seats are removed and the welding work is done to fix foldable beds and place for stretchers by the side. Special containers are created to hold oxygen cylinders and also oxygen concentrators. One vehicle takes two days to be converted and we strictly follow COVID norms at work. We save time taken for painting by pasting radium stickers on vehicles,” Ram Prasad said.

“We are here not to make money but serve the society in its hour of need. Conversion usually is an expensive affair but we take only nominal charges after deducting the material prices. Many people have asked us to convert their vehicles permanently into ambulances and some have made ad-hoc arrangements,” he added.