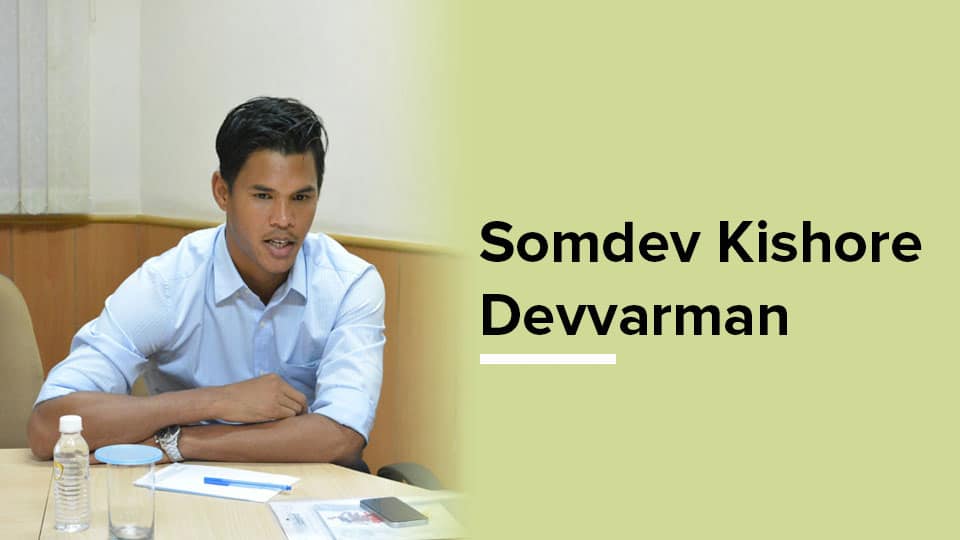 One of the India’s finest tennis players is Somdev Kishore Devvarman. Having started to play tennis at the age of 9, he hit headlines as a student of University of Virginia, USA, for being the only collegiate player to have completed a hat-trick by winning the NCAA Singles Championships from 2006 to 2008.

A graduate in sociology, Somdev turned pro in 2008 and his best achievement in ATP World Tour has been reaching the finals of the Chennai Open in 2009 as a wild-card entry. He also cracked into top 100 in the world  ranking twice.

One of his career high-points is winning gold medal in men’s singles at Commonwealth Games in New Delhi, 2010 and followed by two more gold medals (singles and doubles) at the 2010 Asian Games in China. He announced his retirement from professional tennis early this year and is now involved in promoting the game.

Star of Mysore caught up with Somdev during his recent visit to Mysuru to inaugurate the Sports Management Course at SDM-IMD in association with Centre of Sports and Management Studies for which he is the brand ambassador. Excerpts…

Star of Mysore (SOM): At the age of 31 do you think it was too early to announce retirement?

Somdev: I think I was ready. Professional tennis takes a toll on your body and mind and I have always been a player who wants to play for the right reasons. I have never played to get fame or to get rich but I was super-passionate about it. I reached a point where the passion was reducing, though I still love the game. Once I realised that the passion is not a 100 percent, it will definitely impact my game. And I came to an agreement with myself and it was an easy decision.

SOM: What will be the focus in your post-retirement days?

Somdev: I have decided to spend time in India and ways in which I could connect sports to different aspects of life, whether it is sports in education, sports in work or sports management. I definitely feel that India is an emerging market in sports and there is no reason why we have billion people and don’t have better sporting programmes. I think there is a whole shift happening in how people used to see sports not just professionally but for health reason as well. There is massive scope and it is my goal to work towards bringing in a change in how we look at sports.

SOM: There is a lot difference when it comes to training in the USA when compared to India and I believe that there is a much more professional approach there.

Somdev: I think it is fair statement but obviously depends on which sport. Generally speaking, the level that is set here is not on par with international level. I think a lot of the athletes emerge in India out of their own efforts and not because of the system. What we actually need to focus is to create a support system. Young and knowledgeable people must work towards building the system. There are a people already working at the grass-root level trying to bring in sponsors and making India a sporting nation.

SOM: In our country it is often debated that the actual sportspersons must come into administration of sports bodies. Your opinion.

Somdev: I don’t want to say that only sportspersons should be running sport bodies. I think it should be a good combination of experienced administrators with sound knowledge about sports and sportspersons. If a person is at the helm for a good 15 years and is not working for the development of sports then that person does not deserve to be there as it affects the growth of that particular sport. Having sportspersons on board would help in the improvement of different sporting bodies.

SOM: How do you think that sports management courses can bring a change?

Somdev: One major difference would be to educate students on what exactly is in store for them after they complete the course. There are different areas of sports management like management, events, finance, charity, player management and much more. I believe the opportunity is endless but again it’s the question of educating the youth and helping them find their passion.

SOM: What has been your career high-point apart from breaking into top 100 ranking twice and winning gold medals at Commonwealth Games and Asian Games?

Somdev: Playing against Roger Federer twice was definitely one as he is one of my idols. But things which happened before I entered professional tennis will stay in my memory throughout. Being nominated for the comeback athlete of the year alongside Nadal in 2013 is also memorable.

SOM: Right before Rio Olympics, there were controversies in player combinations. Do you think such controversies would bring the down the team morale?

Somdev: As an athlete you don’t blame the situation and rather take on responsibilities when you are at the game. At the end of the day you live with the result — win or loss. I do agree that it brings unnecessary negative attention. I also think that people who were involved in all the confusion really want it to happen. So hopefully we can avoid unpleasant situations by dealing with them behind closed doors. There would be conflict in work, business, sports and other areas. We must understand the situation and work towards solving them.