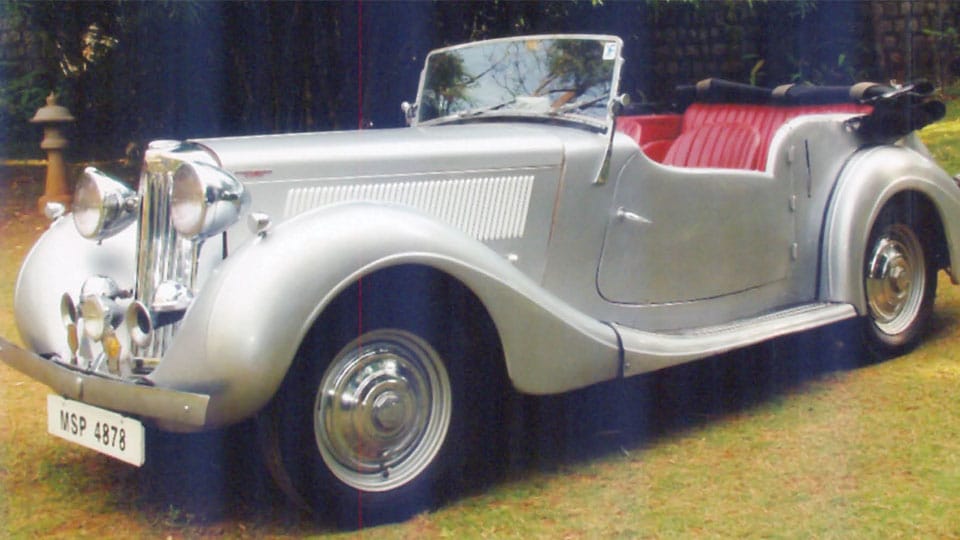 50 Vintage beauties will start from Raj Bhavan tomorrow; will be in city till Oct. 2

Mysuru:  A two-litre 1937 Sunbeam Talbot, the only car in India previously owned by Lord Mountbatten, the last Viceroy of India, will be displayed during the Vintage Car Rally organised as part of Dasara celebrations.

The car is currently owned by Sabena Prakash and the Vintage beauty will be brought  from Bengaluru on Sept. 29 (tomorrow). Along with Lord Mountbatten’s car, 49 other vintage beauties will take a tour of the city for three days.

Mysureans will have an opportunity to see these classic cars in the event organised by Federation of Historic Vehicles of India (FHVI) from Sept. 29 to Oct. 2. The Federation will bring over 50 vintage and classic cars and motorcycles and the rally will be flagged off from Raj Bhavan in Bengaluru by Governor Vajubhai Vala at 9 am tomorrow.

The rally will arrive in the city and pass through Mysuru’s historic monuments tomorrow evening, after which the vehicles will be parked in front of the Mysore Palace. Prominent personalities from royal families and well-known industrialists from business houses in India and Sri Lanka will be part of this rally.

The FHVI has taken part in Dasara procession for several years and now it has made it an annual event from last year with the help of Government of Karnataka, Department of Tourism and Department of Forests.

READ ALSO  All set for Gajapayana: First batch of six elephants to arrive in city on Aug. 22

Dr. Ravi Prakash, President of FHVI, said, “A total of 50 entrants are coming from overseas and across India and Karnataka. There would be 125 participants. This year the prominent car will be 1937 Sunbeam Talbot, 2-litre, the only car in India previously owned by Lord Mountbatten.”

Historic motorcycles will be in the lead. The vehicles have to move in the city between 30kmph and 40kmph and on the outskirts between 60kmph and 70kmph, he added.