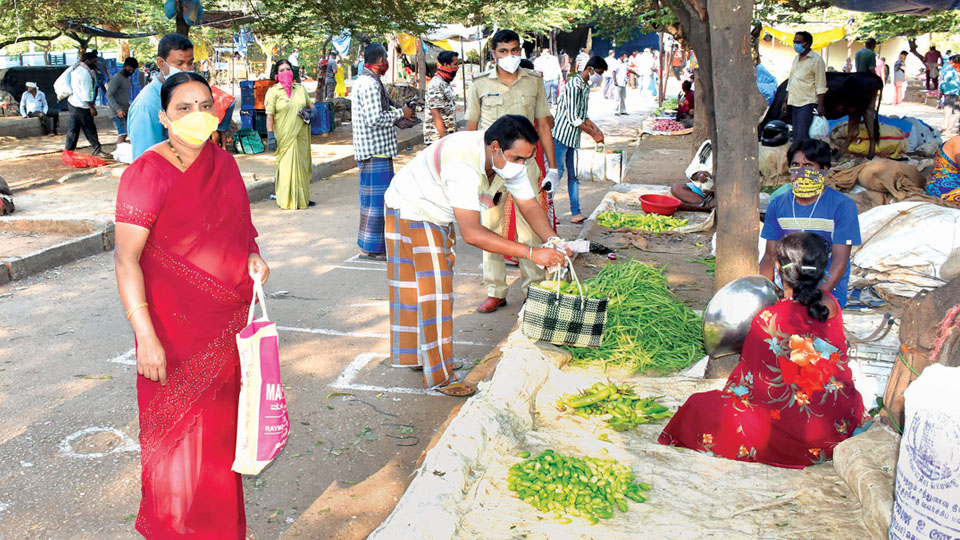 Mysore/Mysuru: It was business as usual at the M.G. Road Market this morning despite Mysuru District Minister S.T. Somashekar’s directive to completely shut down the vegetable market as there were numerous complaints about social distancing not being practiced and a series of violations in lockdown norms.

The Minister was addressing a COVID-19 review meeting at D. Devaraj Urs Hall at the ZP office in city yesterday. He had instructed the authorities to barricade and close the M.G. Road Market and shift the same to the sprawling Dasara Exhibition Grounds, where a market is already functioning post lockdown.

Krishnaraja MLA S.A. Ramdas and Chamaraja MLA L. Nagendra had drawn the attention of the Minister regarding unhygienic practices at the M.G. Road Market that could prove dangerous amid COVID-19 outbreak. The MLAs opined that the early morning crowd, the way the vendors dump vegetables on roads and footpath was potentially harmful to Mysuru and could endanger the lives of both the vendors and the buyers.

Today morning, the Market functioned as usual with over 70 to 100 vendors coming from various parts of Mysuru and there was a big crowd to purchase the vegetables. Official sources told ‘Star of Mysore’ that as the M.G. Road Market is very sensitive issue, a sudden decision to shift the Market was difficult and could prove counter-productive. But officials said that steps will be taken to ensure social distancing and maintain hygiene.

The Minister’s directive also came after a social media outrage over unhygienic conditions of the M.G. Road Market where cleanliness-conscious Mysureans had posted that if not shut, the Market will turn a COVID-19 hotspot. Social media users had termed the Market as “unhygienic Road Market” where farmers got their produce and dump on the roads while consumers crowd to buy them throwing social distancing norms into thin air.

READ ALSO  It's official. Vaccination drive to commence from Jan. 16

Netizens had posted several photos and videos on the social media drawing the attention of the authorities including Deputy Commissioner, MCC Commissioner and all the elected representatives of Mysuru on how even the footpaths had been occupied by vegetable vendors.

The videos showed how vegetables are dumped on the roadsides and the median causing inconvenience to the buyers, traffic jams and an overall unhygienic environment. Also, the posts highlighted how people were crowding the market in complete violation of social distancing and lockdown norms that could prove costly for Mysuru which is already bearing the brunt of COVID-19 outbreak.

Banana Mandi to be shifted

Following complaints, District Minister Somashekar had also directed the authorities to shit the Banana Mandi at Boti Bazaar on Aane Sarot Road to either APMC Market Bandipalya or Old RMC Yard on Sayyaji Rao Road. This step too was to ensure social distancing at the crowded market that is a storehouse of all varieties of bananas and where traders do wholesale and retail marketing.

Following the Minister’s directive, Development Officer of Mysuru City Corporation Nagaraj led a team this morning along with Police security from Devaraja Sub-division and asked the banana traders to close their outlets at Boti Bazaar and shift to APMC Market or Old RMC Yard. Loudspeaker announcements were made asking the traders to shift from tomorrow.