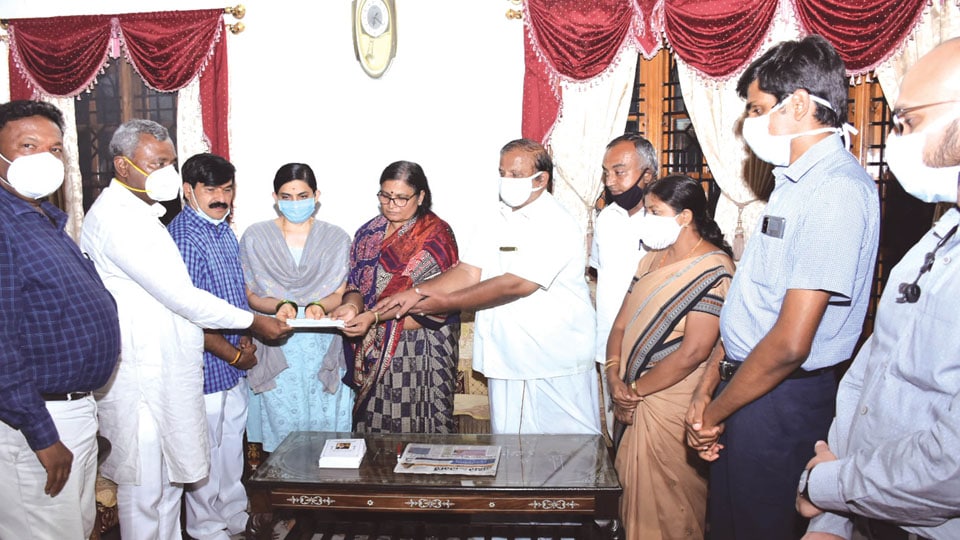 Mysore/Mysuru: District in-Charge Minister S.T. Somashekar handed over a cheque for Rs. 50 lakh to the family of Nanjangud Taluk Health Officer (THO) Dr. S.R. Nagendra, who had committed suicide on Aug. 20 allegedly due to work pressure.

Later, talking to reporters, Somashekar said that as announced by Chief Minister B.S. Yediyurappa, Rs. 50 lakh cheque had been handed over to the doctor’s family and it would be kept as Fixed Deposit (FD) in the names of Dr. Nagendra’s mother, wife and daughter. Besides, a suitable job would be given to Anitha on compassionate grounds. The existing rules permit giving a job in Group-C category and a decision in this regard would be taken in next three to four days.

On enquiry into death, he said: “the CM has asked Regional Commissioner Prakash to complete the investigation within a week. The probe report is expected to reach the CM soon. It was common to expect pro and anti stance on such incidents.”

Regarding Narasimharaja MLA Tanveer Sait’s allegation that decisions taken by District Minister with regard to Covid-19 were not being implemented, Somashekar said Tanveer Sait was present in the recent Covid-19 meeting and he knew what all had been implemented till date. “In fact, we have not stopped anything. I didn’t know why he said. Tanveer too has given certain suggestions,” he added.

On shortage of Group-D staff, the Minister said the Deputy Commissioner was given powers to recruit Group-D workers, laboratory technicians and nursing staff on temporary basis wherever required.

Somashekar said that the Dasara High Power Committee headed by the CM is expected to meet in next two to three days in Mysuru. Since Yediyurappa is visiting Kodagu to see rain damaged areas, the meeting is likely to take place here to discuss regarding Nada Habba celebrations in wake of Covid-19.