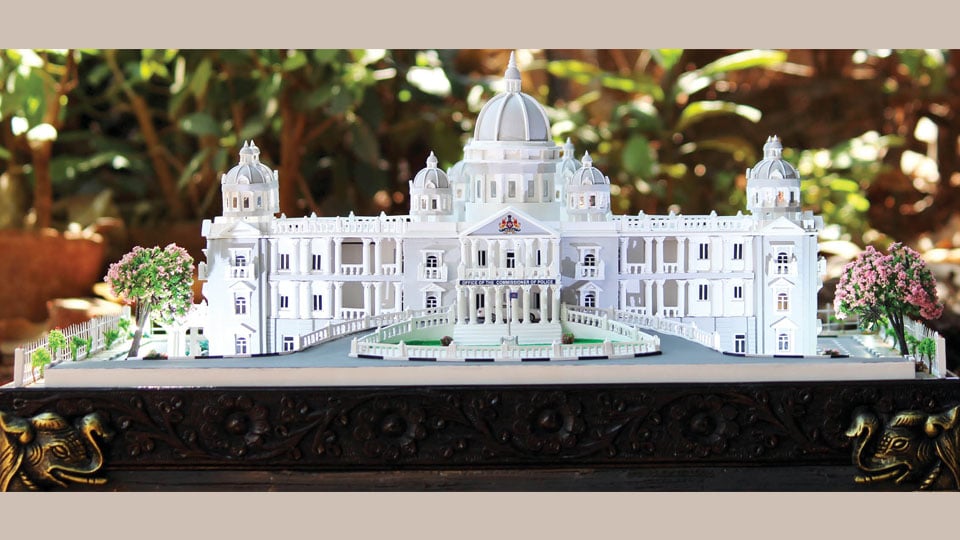 In the fast-changing landscape of Mysuru, Maheshwar makes miniatutre models of original monuments before they are demolished or remodelled. His artwork aims to preserve these spaces as well as the memories of communities that inhabit them. He says that younger generation will be able to tangibly experience old buildings through his models.

The Karnataka High Court building, which was formerly known as Attara Kacheri, is one of the most popular heritage buildings of Bengaluru. The history of this grand red building appears remote in the hustle and bustle of litigations.

With its Greco-Roman style of architecture, the two-storied building of stone and brick, painted red, is a structure of vast expanse. Officially built in 1868 and situated opposite the Vidhana Soudha, the heritage building serves as the perfect contrast to the white marble stone columned building of Vidhana Soudha.

The beauty and the architecture of this structure has captivated the imagination of a number of artists. Maheshwar has replicated the elegance of this colossal monument with his miniature model which is now on display in the Supreme Court Museum.

When High Court curators were in search of an artist to create replicas of the courts after Supreme Court had directed them to take up such a work for its museum, Maheshwar’s miniature art grabbed the attention of a curator. “I got a letter of appreciation from the Supreme Court for creating it,” Maheshwar says with a sense of pride.

In fact, Maheshwar is not formally trained to work on miniature arts and he is not even a graduate in art. What fascinated him in his childhood was making dolls using clay and crafting tiny houses using matchsticks. This passion and fascination later grew and found its spectacular expression when he joined a miniature-modelling firm in 2011 where he worked for two years.

A graduate from an Open University, he had earlier served the nation as a soldier for three years in Border Security Force (BSF). Maheshwar has worked as an Art Director for more than 70 advertisements and Kannada movies like ‘Operation Alamelamma.’ He also featured in a few advertisements such as Sunpure and Mysore Silk.

This young artist is the son of Nataraj and Soubhagya, residents of Hebbal in Mysuru. He is now planning to set up a Miniature Art Museum in four to five acres of land where he wants to exhibit mini models of all heritage buildings.

“Mysuru had more than 400 heritage structures but the number has come down to 200 now. As these heritage structures represent our cultural legacy, I would like to preserve them in the form of miniature replicas for our future generation and display them at one place,” he says.

Maheshwar has built more than 20 scale models of popular structures including those of Police Bhavan in Mysuru, Office of the Police Commissioner, Mysuru, an apartment, an international school and a hospital in Bengaluru. The miniature Police Bhavan can now be seen at the stall set up by Mysuru Traffic Police in Dasara Exhibition and also a tableau created for Forest Department at the same venue.

Recently, within a short span of 12 minutes, 35 artists including Maheshwar and his brother Parameshwar had painted a picture of Mysore Palace along with that of Mounted Police on a 15X40-feet wide flex board that was erected at Torchlight Parade Grounds as part of Dasara celebrations.