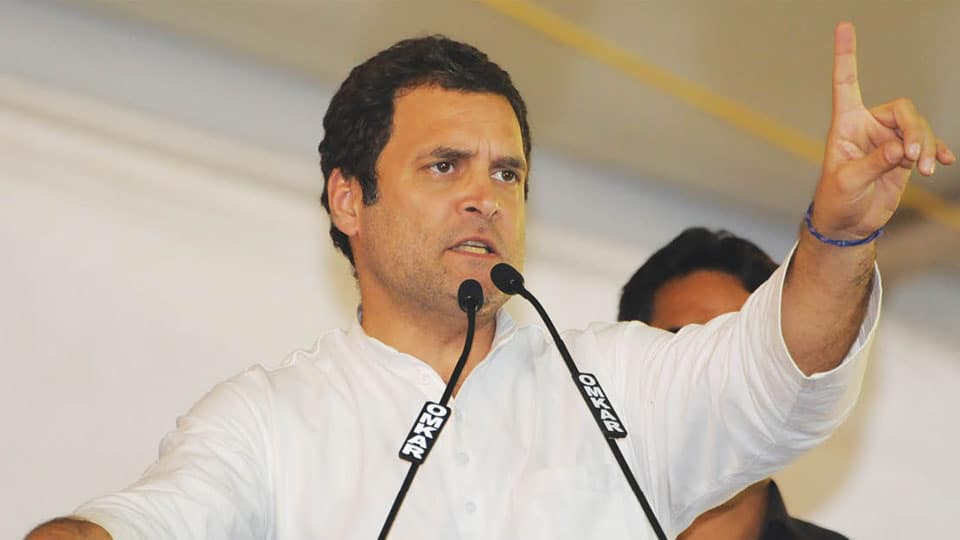 Mysuru:  Accusing the BJP Government at the Centre of failing to fulfil promises, All India Congress Committee (AICC) President Rahul Gandhi has maintained that the State Congress Government has been functioning as per the ideologies  of Basavanna.

Addressing the party’s ‘Janashirvad Yatra’ at Maharaja’s College Grounds here yesterday, Rahul Gandhi said that the Congress has an ideology of uniting the Society while the BJP has an ideology of dividing the people and the JD(S) has  no ideology.

Alleging that the BJP came to power on the basis of false promises, one of which was generating two crore jobs every year, he said that the country now finds itself facing the highest rate of unemployment in the last eight years.

Giving a clarion call to party workers to defeat arch rival BJP, Rahul Gandhi highlighted the failures of the current dispensation at the Centre.

Lambasting Prime Minister Narendra Modi, Rahul mocking the PM’s ‘Start-up India’ initiative, said that the initiative remained a mere announcement at the National-level, while the Congress Government in Karnataka has gone a step ahead by making many starts towards the welfare of the people.

Accusing Modi of ruining the entire banking system in the country, he listed various decisions of the Modi-led Government in the last four years that did more harm than good to the common man.

Claiming that demonetisation dealt a severe blow to the poor, he said that small businesses too were affected by   the decision.

Terming Modi’s foreign policy as a failure, he said that the previous UPA Government led by the Congress fostered bonds with neighbouring countries like Nepal, Burma, Sri Lanka and Maldives. But it is vice-versa now with the same countries hobnobbing with China, he said.

Stepping up his attack on the JD(S), a day after he dubbed the JD(S) as ‘Janata Dal Sangh Parivar,’ Rahul asked the JD(S) leaders to clarify if they were helping the BJP or not.

Reiterating that the JD(S) does not have any ideology, he also accused the party of  being opportunist.

CM Siddharamaiah, in his address, launched a tirade against PM Modi saying that the PM was levelling false charges against the Congress Govt. in the State.

Maintaining that the forthcoming Assembly polls will be a fight between Congress secularism versus BJP’s communalism and JD(S) opportunism, the CM promised to waive all farm loans if his party was voted to power in the Assembly polls.

Lashing out at the JD(S) supremo and former PM H.D. Deve Gowda and his son former CM H.D. Kumaraswamy, Siddharamaiah said that the JD(S) will not get more than 25 seats.

Seven rebel JD(S) MLAs, who quit their Assembly membership a couple of days ago, formally joined the Congress at the rally in the presence of   Rahul Gandhi.